Lion populations on the Sabi Sabi Reserve constantly shift and change. For the 30 years of our existence, the rangers at Sabi Sabi have monitored and documented the various prides that have made this part of the bushveld their territory. The dominant pride here for the past few years has become known as The Southern Pride, and we have been following their progress with great interest. Here is the latest update.

This year, to our great excitement, over a period of a few months twelve beautiful cubs were born. Since their mothers remove them from hiding and introduced the infants to the pride females a lot has transpired. 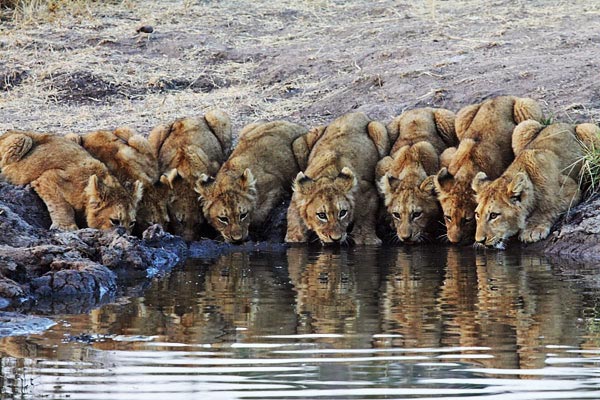 One of the adult lionesses, (the first to give birth) lost both of her cubs to starvation. Rangers believe that after whelping the mother split from the other females in the pride and was unable to hunt enough to sustain both herself and the cubs. Unfortunately they lost condition rapidly and died. The remaining ten cubs – ranging in age from four to six months – have all done exceptionally well, growing and getting stronger each day. It’s too early to tell with certainty, but it appears that there are seven male and three female cubs – which is good news for the young males who could one day form a powerful coalition.

The eight adult females in this group have also fared well and are thriving. One of these lionesses has an interesting history. She had been travelling with her five brothers but became separated from them when they were attacked by the four big males which make up the Magingilanes Pride, a group which frequents the northern part of Sabi Sabi. During this confrontation one of the brothers was killed, leaving just the four young boys together. The female then joined the lionessses of the Southern Pride in the southern section of the Sabi Sabi bushveld, which was a good move. She now has the protection of her mothers and sisters, a group which has become a formidable hunting unit. These females have specialised in killing buffaloes, and are capable of bringing down large male buffalo with ease. There have been huge herds of up to 600 buffalo moving through Sabi Sabi in recent weeks, with guests seeing first-hand thrilling lion/buffalo confrontations. 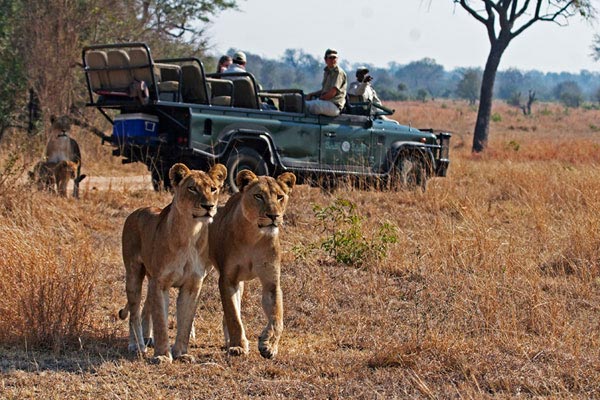 As for the four young brothers; they have matured into strong mature male lions and will be a force to be reckoned with in another year or so. They cover an enormous amount of territory and were even seen right up in the Northern Sabi Sands close to the Manyaleti border. These young nomads are covering a vast range looking for a vacuum where there are no other males.

The females are still spending a lot of time down in the south and no longer have any males to protect them and their cubs. The three males of the Toulon Pride which fathered the cubs have been ousted by two massive Kruger Park lions which moved into the area. The aim of these Kruger males will be to sire their own cubs and keep their blood lines dominant. They have already had cubs with the females of the Charleston Pride to the east of Sabi Sabi. The Southern Pride females are now a perfect target.

The problem of course, is that the existing ten cubs were not sired by these two, and females with young cubs cannot go into oestrus and mate with new males while their cubs are so young. This means that the males will more than likely try to kill these cubs causing the females to go into oestrus. 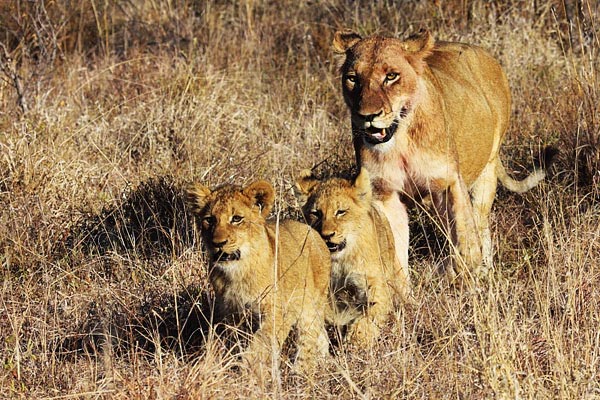 The pride females have moved their cubs as far south as possible to avoid a confrontation. However, buffalo and other big prey species are less abundant in this area, forcing the females to hunt in the males’ territory, exposing them and their cubs to potential harm. To temporarily divert the danger, two of the lionesses without cubs went into a ‘false oestrus’ and lured the males away with a promise of mating.

The next 18 months will be filled with obstacles and challenges for the 10 cubs as they struggle to survive to adulthood. We will keep watching and reporting on their progress.