It was an historic moment for South Africa as the world’s largest soccer tournament to be hosted on African soil kicked off on 11 June 2010. And while life in the bushveld still carried on uninterrupted along its centuries-old daily rhythm, there was no escaping soccer fever anywhere in South Africa. Sabi Sabi was no exception and the wave of patriotism and spirit of the “beautiful game” was certainly felt at our lodges. From the excited whispering of ardent supporters early in the morning, to the surreptitious wearing of supporters’ jerseys under staff uniforms, to the humming of soccer songs, we at Sabi Sabi joined our fellow South Africans in gearing up for the opening ceremony and first game. 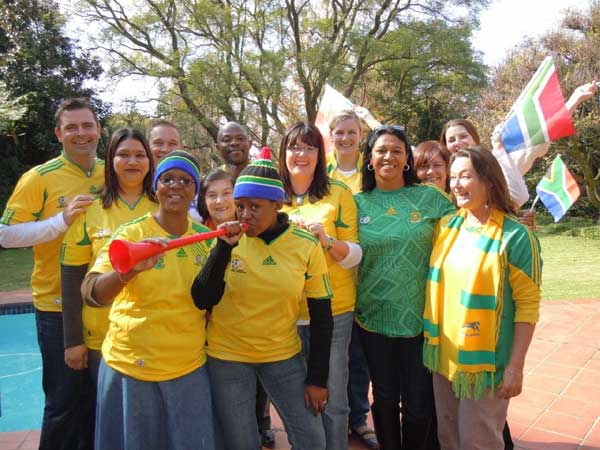 The team at Sabi Sabi’s Johannesburg office celebrated the start of the games with a traditional barbeque, everybody kitted out in full supporters’ paraphernalia, cheering on our players. At the lodges the excitement was palpable, although “not a vuvuzela in sight,” said group operations director, Rod Wyndham, “The closest we got to a vuvuzela was the kudu horns being blown summoning guests to meals. Amongst our staff there was an unbelievable spirit of togetherness and support for our national team Bafana Bafana (the Boys), – and through it all, a feeling of immense pride in our country and its ability to successfully pull off such a huge event under the spotlight of the world.”

The tournament has brought an influx of more diverse international visitors than usual, from a host of nations across the globe. For the past few weeks we have heard almost every language under the sun spoken at our lodges. But the language of soccer fever needs little translation. The cheers and jeers, elation or dejection are universally understood. There were a few instances when we were asked to change our safari schedule to accommodate guests wanting to watch the matches, and of course we were happy to comply.

In the end, although South Africa didn’t win the Cup, we certainly won the hearts of the world.

To read about Sabi Sabi’s involvement with soccer development in our neighbouring communities click here.