The water monitor is one of the most striking members of the Reptile family and is second in size only to the Nile crocodile. Including the tail, large adults can reach lengths of up to nearly 2.5 meters. Its body is adorned with beautiful yellow patterning, aiding it to be well camouflaged in its preferred habitat close to bodies of water and reed beds. Although usually found close to water, these monitors are not water dependent and will actively forage for food on land, travelling large distances from water if need be. They are also capable of climbing trees but are usually found basking on riverbanks. The streamlined shape of the body is perfect for a semi-aquatic lifestyle and it uses its long, strong tail to propel itself through the water with consummate ease. The water monitor’s range is limited to the eastern half of southern Africa (including South Africa, Mozambique and Zimbabwe), and the eastern extremes of Botswana. 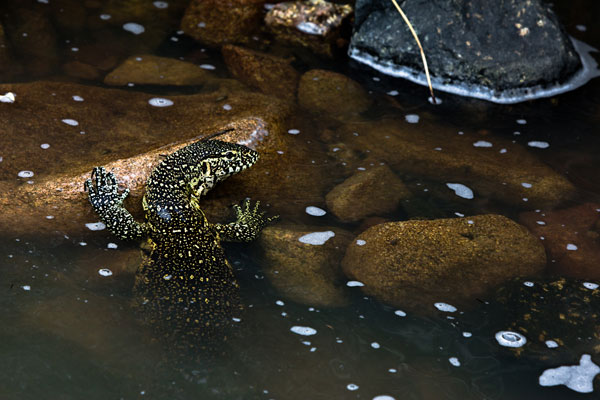 They are carnivores and their diet consists of whatever is on offer. Water monitors have been recorded eating everything from frogs, crabs, invertebrates and lizards, to small mammals and birds. But perhaps they are best known for their raiding of nest sites. One could consider water monitors as a population control factor of both crocodiles and chelonians (tortoises, terrapins and turtles) due to their insatiable appetite for these species’ eggs. They have large claws on their feet which they use to great effect when digging up such nests, as well as in self-defense.

Water monitors share an interesting symbiotic relationship with the fungus growing termite when it comes to their breeding behaviour. A female water monitor will seek out an active termite mound when it is time for her to lay her eggs, and dig into the mound. Once inside, she lays her eggs (40-60) and then abandons them. The termites, for whom temperature regulation is imperative (due to the narrow temperature range in which their fungus will survive), immediately set about repairing the hole in their nest. This then seals the eggs within the termite mound, thus providing them with a warm, humid and safe environment for them to develop. There is therefore no parental care in this species and the young monitors merely dig their way out of the nest upon hatching. The termites once again repair the hole and the cycle repeats itself. The incubation period of monitor eggs is surprisingly long, even by lizard standards – it can take as long as 10 months.

Their status is not threatened, but water monitors were originally placed in the first Reptile Red Data Book in South Africa due to the excessive use of their skin for leather and their fat in the “muti” (traditional medicine) trade. The species has since been removed from the book but remains on CITES Appendix II.