The Warthog, Phacochoerus africanus, a common resident of the Sabi Sabi bushveld, is widely spread throughout most of sub-Saharan Africa. With a flat head and large warts, this is a really unattractive member of the pig family. The male of the species can weigh as much as 100kgs, with the female much smaller, weighing in at only 70kgs.

Both the males (boars) and females (sows) have 2 sets of ivory tusks – an upper set which is curved into a semi-circle, and a lower set which is extremely sharp and dangerous. The tusks are formidable weapons, and in males can reach a length of 25cms. Both sexes have distinctive wart-like bumps on their faces, but on the male these are much more pronounced, with the upper “warts” growing extremely large, possibly to protect their eyes during fights with other males in the mating season. 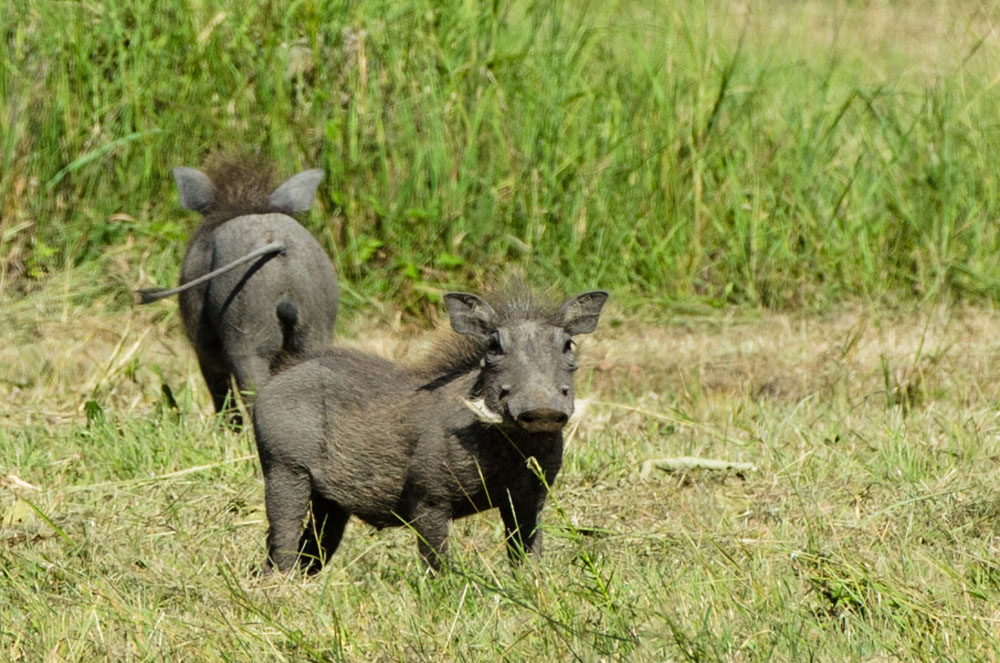 Warthogs have a naked grey skin, covered with occasional sparse bits of bristly hair. Along the backbone there is a little more hair, forming a small mane, and finally, it sports a tuft of coarse hair right at the tip of its tail. As with many other bushveld animals, oxpeckers assist in keeping insects and ticks off these bare creatures, and wallowing in the mud completes the job of removing pests.

The males of the species are generally solitary, while the females live in small social groups called soundings, made up of one or two mothers with their 3-4 piglets. When running through the grass, their tails stand straight up, with the hair on the end waving like a little pennant, making it easy for members of the family to follow each other.

Warthogs are herbivores, eating plants, grasses, roots and bulbs. They are often seen kneeling on their calloused front legs, using their snouts and tusks to dig for buried tubers.

Although capable of digging their own homes, warthogs generally live in abandoned holes and burrows, their favourite being aardvark burrows. When chased by predators, their instinct is flight rather than fight. Given the opportunity, they will flee to their burrows at speeds of up to 30 kilometers per hour and scurry in backwards, leaving those menacing tusks facing outwards. Many guests on safari have had the opportunity of seeing hungry lion or leopard prowling around a termite mound, unable to safely dig out the warthog inside its den.