Squirrels are rodents belonging to the family Sciuridae which also includes chipmunks, marmots and prairie dogs. The name squirrel is derived from skiouros, an ancient Greek word meaning shadow-tailed. There are over 270 types of squirrels, with various indigenous species found on every continent except Antarctica and Australia, (although squirrels have been introduced into Australia.) Squirrels are divided into 3 groupings, tree, ground or flying squirrels.

There have been squirrels on the African continent for around 20 million years. The African bush squirrel is a genus of squirrels that consist of 11 species of which the Smith’s Bush squirrel is one. Smith’s Bush Squirrel (Paraxerus cepapi), otherwise known as the Yellow-footed Squirrel or in South Africa simply as the Tree Squirrel is found in Central Africa, Eastern Africa and the northern regions of Southern Africa. This species lives in savannah woodland areas, favouring trees with suitable nesting holes. Tree squirrels are often seen in the protected bushveld areas of Sabi Sabi and the surrounding reserves. 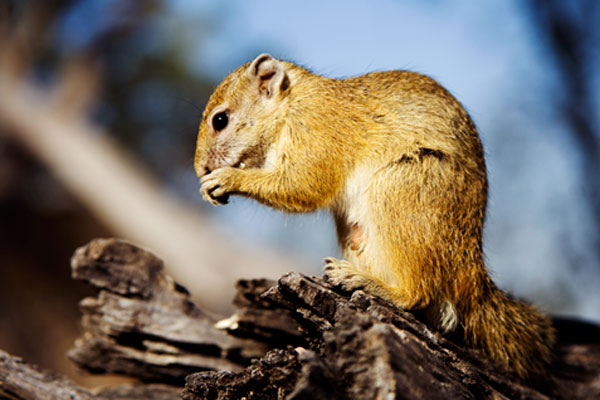 Tree squirrels, as the name implies, are arboreal (tree living) animals but will come down to the ground to forage for food. They are largely vegetarian, but like most rodents, will also take insect prey. They eat seeds and nuts from which they derive most of their protein, carbohydrates and fat.

Squirrels hoard food during the winter, first biting the seeds or nuts open, licking and rubbing them thus leaving their personal scent as a trail before burying their treasure. This ‘scatter-hoarding’ distributes seeds, not all of which are retrieved. In the spring new sprouts often appear where squirrels have buried their winter food.

Tree squirrels are territorial, with mainly the males being responsible for defending a family territory.

These are gregarious animals, participating in social grooming and common scent marking to strengthen their social bonds – making sure that any intruder can be easy identified and immediately chased off. Territorial families nest together at night.

Like most other squirrels except flying squirrels, the Tree Squirrels are diurnal, only active during the day. They are generally slender animals that grow up to 35cm in length, tail included. Their characteristic bushy tail which is generally extended backwards, makes up half the length of their bodies. The females are a little heavier than the males. They have acute vision and can spot danger from a distance. When disturbed these squirrels will immediately take refuge in a tree and make clicking sounds while flicking their tails.

The trees squirrel has hind legs which are longer than the front, with toes equipped with claws for climbing trees. There is soft padding on the underside of their feet. They have a tooth structure which is typical of a rodent; large chisel-like top and bottom incisors that continue growing for their entire lives and flattish grinding molars for crushing food.

Squirrels in the southern hemisphere are seasonal breeders. Mating takes place in August and after an 8 week gestation period, 1 -3 blind, naked, toothless young are born. The baby squirrels are weaned at 6 weeks and become sexually mature shortly thereafter. A squirrel’s life expectancy is 2-3 years in the wild, with squirrels in captivity living for as long as 9 years.