For a lot of people around the world the word termite strikes fear. Termites have the negative and well-earned reputation of eating houses. But out here in their natural environment they are a keystone species – and by keystone I mean that the entire environment relies on termites to survive.

Termites are the oldest known organised community on the planet – they have been traced back 300 million years. These tiny little creatures are no longer viewed by scientists as millions of individuals making up a colony but instead are seen as a super organism. They work together to form one of the most spectacular communities on the planet. 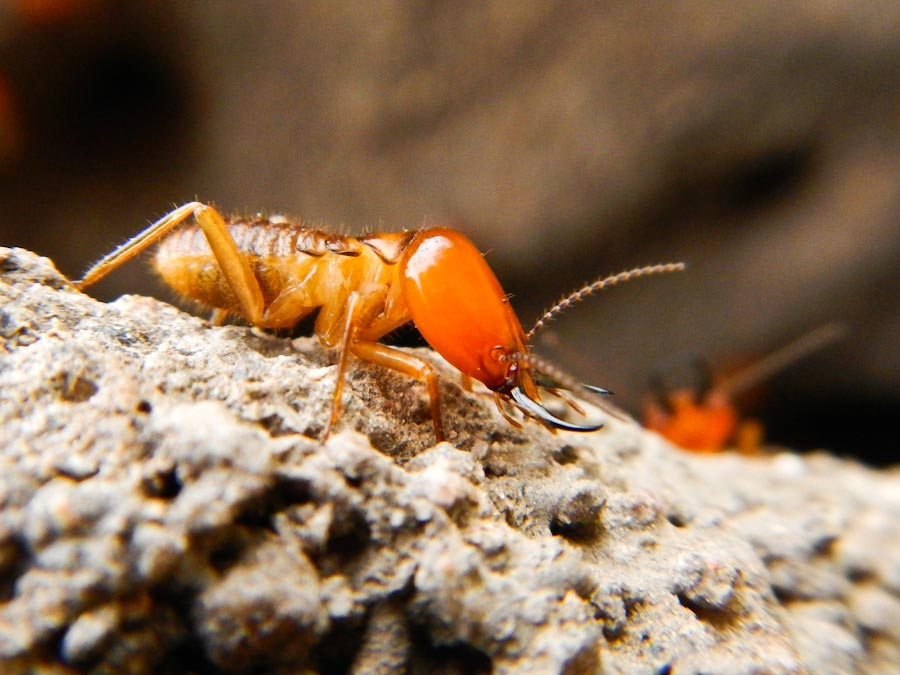 Members of a macrotermes termite community are split into a number of roles such as workers, soldiers and a king and queen. Each termite has its job which is carried out 24/7. The workers collect wood and tend to gardens, the soldiers are constantly on guard waiting for any danger so that they can protect the colony, and the king and queen have the job of fertilising and laying eggs respectively.

Do wood eating termites actually eat wood? Partly…the workers gather wood by chewing it and swallowing it, but due to the hard lignin in the wood they cannot digest it. So they return to the mound and take their faecal pellets and join them into a ball which resembles a brain (with many grooves). They then take fungal spores of a fungus called termitomyces, which only grows in termite mounds, and plant it in the chewed up wood. The fungus then digests the wood and the termites eat the fungus.

In order for the fungus to grow it needs constant humidity and a temperature of around 30 degrees Celsius. The termites maintain the temperature by opening and closing chimneys in the mound, using their metabolic heat during cold times and having porous walls to allow the wind to clear out excess heat. Humidity is maintained by tunnelling down to the water table in order to release water vapour into the colony. The deepest tunnel found was 30 metres deep and the tallest mound was a staggering 14 metres high.

One of the many things we still have to figure out is how termites communicate. On days when emergences take place, all colonies within the vicinity somehow have set a time when they will let their flying reproductives out of the mound. For example on the 20th November at 16h00 all the same species emerge from their respective colonies making sure that they mate with a male/female from another colony to ensure that genetic diversity continues. We don’t even fully understand how communication takes place within a colony let alone between colonies.

These fascinating colonies will live for around 80 to 100 years before dying out. The mounds are then used by birds for nesting, snakes for hibernating, wild dogs and hyenas den in old mounds, warthogs sleep in them at night and nocturnal creatures like porcupines and honey badgers will use them during the day. Even while colonies are active they still have a multitude of uses as termites are eaten by many different animals, monitor lizards lay their eggs inside the mounds as the temperatures are perfect for incubation and the mounds are responsible for the germination of many seeds of trees! What an EPIC little creature the termite!

1. Insects, including termites, are the most successful group of living creatures in the world today. Termites are the only insect order in which all species are highly social. They have been on Earth for over 50 million years, and although they are sometimes called “white ants”, they are not ants, nor are they closely related to them..

2. In a termite colony there is a caste family structure: the workers – blind, sexless nymphs: the soldiers – with large heads and long jaws: and the reproductives including the queen.

3. The termite queen is the largest of all individual social insects. She produces one egg approximately every 3 seconds.

4. Just before the rainy season, some of the worker termites complete their development and become winged adults. These leave the nest in swarms and eventually land on the ground, shed their wings and mate, and create new colonies.

5. Termites are probably the most efficient creatures contributing to decomposition in the bushveld. They are also an important food source in Africa.

6. The termite species Macrotermes are the builders of nearly all the large termite mounds in Africa. There are many wonderful examples of these termitaria at Sabi Sabi. Macrotermes termites are fungus-growers, bringing plant material back to the colony, chewing it to a pulp and using it to cultivate the fungus on which they feed.