The Sycamore Fig Tree (Ficus sycomorus), is a member of the family Moracea, which also includes the common edible fig. The species is found in various parts of Africa south of the Sahara Desert. Although it is sometimes found in woodland, these trees generally grow in riverine areas. The genus is ancient, being at least 60 million years old. 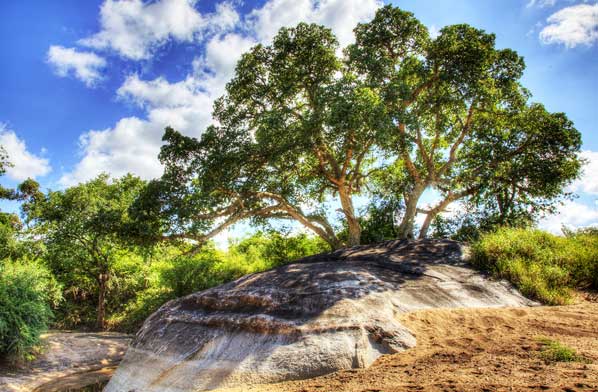 The Sycamore Fig Tree can attain great heights, sometimes growing 15 meters or more. It is quite easy to identify, having a distinctive yellowish bark and fluted, buttressed trunk. The wood is soft, making it unsuitable for most purposes. In Uganda the paper-like bark is used to make the very distinctive barkcloth, while in ancient Egypt the wood was used to fabricate coffins.

It produces an abundance of fruit almost all year round. The prolific crop is an important source of nourishment, being eaten by a number of animal and bird species. Monkeys and baboons, birds and bats eat the fruit directly from the branches, while antelope and warthogs devour what falls to the ground. The root system and buttressed trunk of this species, makes it relatively safe from being pushed over by elephants. 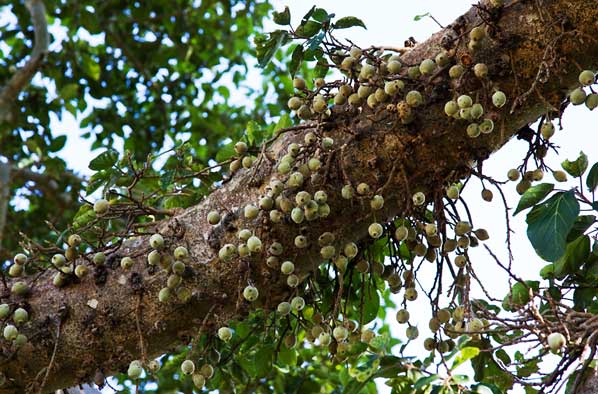 The figs, although edible, are much smaller and harder than those which are domestically cultivated. They are roughly the size of a marble, and vary in colour from yellow and brown, to white. The fig is a false fruit, with hundreds flowers being inside the almost closed, urn-shaped receptacle.

The Sycamore Fig species is characterized by a unique pollination system. The trees have a symbiotic relationship with a wasp species from the family Agaonidae, known as a fig wasp. The female wasps enter the opening of the fruit to lay their eggs, at the same time pollinating the internal flowers. After the eggs have hatched inside the fruit and the wasps have gone through pupation, the mature males and females will mate. The males, which are unable to survive outside of the fig for very long, will dig a tunnel for the females to emerge. The females, with pollen from the flowers inside their host fruit sticking to their bodies, then fly to another tree to repeat the cycle of pollination and egg-laying.