There are some distinct differences between the two species. The male Southern Ground Hornbill has a magnificent red wattle (throat pouch) compared to the dark blue wattle of the northern species. When calling, these wattles are inflated, with the southern species’ call being a “lion-like” sound which carries for quite a distance and is sometimes heard as a duet at dawn between pairs. The northerners call sounds like a grunting leopard. This member of the family has a very large keratin casque on top of its head which is believed to vibrate and amplify its call. 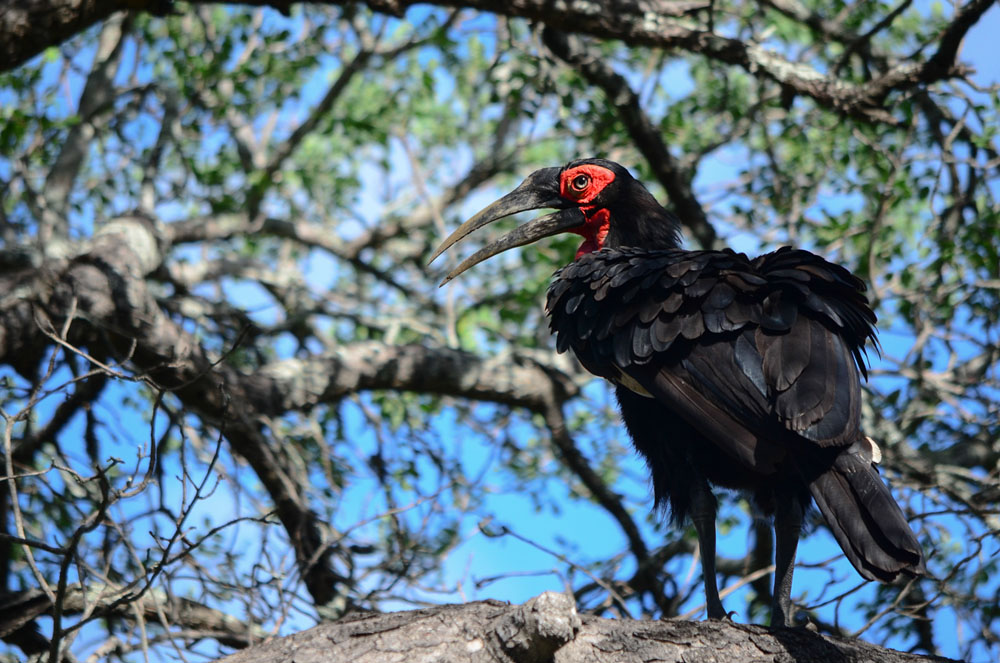 The Southern Ground Hornbill which can be seen at Sabi Sabi, is a gigantic bird (sometimes referred to as a Turkey Buzzard – although it is neither a turkey nor a buzzard), and is the largest of the hornbill species. It can grow to a height of 130cm, with the males attaining a weight of up to 6 kgs and the females being around 2 kgs lighter. Other than the wattle, the bird appears black in colour, but in fact it has white primary feathers which are only visible in flight. The birds are very territorial, with the entire family group of up to 10 individuals protecting a territory which can be many square miles. They are monogamous, pairing for the 30 – 40 years of their lives unless their mate dies.

These hornbills have one of the slowest reproductive rates in the bird kingdom, producing only one chick approximately every 9 years. They are co-operative breeders, with just one dominant breeding pair in a social group, and the rest of the birds being helpers. The ground hornbills are the only birds in the hornbill family which do not seal the entrances of their nests when eggs are laid. The nests, which are returned to every year, are created in crevices such as large holes in tree trunks, and are generally situated a few metres off the ground. Although 2 eggs are laid in early summer, the chicks hatch between 3-14 days apart. Only one chick generally survives, with the other starving to death. For the first month of incubating her eggs, the female is fed by both her mate and the helpers. After about 4 weeks she begins to leave the nest. Juveniles are dependent on their parents for up to one year and will stay with them for several years before leaving the social group, if at all.

These hornbills are omnivorous – although mainly carnivorous. They have very strong legs and spend most of the day walking along the ground looking for food, occasionally running after their prey. They will eat reptiles, frogs, birds, snakes and large insects, using their sharp bills to stab their quarry. Only if absolutely necessary will they engage in aerial pursuits. The hornbills are often seen walking with impala, zebra and other bushveld animals, catching food which has been flushed out. At night they will roost in trees or on high rocks.

The Southern Ground Hornbills are of the most fascinating and striking looking birds which can be seen at Sabi Sabi. They are very much at risk mainly due to a shrinking natural habitat and to persecution. With a population that is now estimated at around 1500 in South Africa, the species is classified as Vulnerable on the IUCN Red List. Several projects are being undertaken to conserve and protect the status of the Southern Ground Hornbill.