The small 5 are those fascinating little creatures in the bushveld with similar names to the real ‘Big 5’. 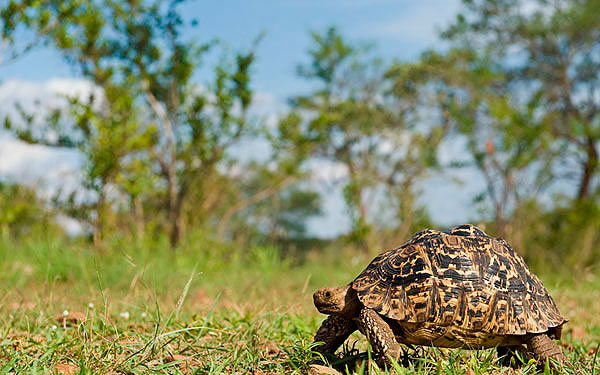 1. The Leopard tortoise has markings on its carapace (shell) that resemble a leopard’s blotching. With a lifespan of 100 years, it is the largest tortoise species in South Africa and 4th largest in the world. It is also the only tortoise that can swim.

2. The Ant-Lion, commonly called a doodlebug, is the predatory larval stage of an insect that resembles a dragonfly.

The larvae, which can live for 3 years, excavate pits in loose, sandy soil. Ants walking across the “trap” slide down the slippery slope, and while trying to escape, are bombarded by sand flicked upwards from the bottom of the incline by the awaiting ant-lion. The cunning predator uses its powerful jaws to drag its prey under the soil, where it will suck out all of the helpless ant’s juices.

3. The Rhino-beetle is part of the Scarab family and is so named for the massive rhino-like horn on its snout. This beetle is one of the great recyclers of the bushveld, and is proportionally one of the world’s strongest creatures. It is able to carry 850 times its own weight!

4. Red-billed buffalo weavers are smallish birds with black feathers and distinctive red bills. They are a little bigger than house sparrows. The species builds big distinctive communal nests with many nesting chambers. In South Africa these nests generally face North or North-East, making them good navigation tools on cloudy days

5. Elephant shrews are not true shrews – they are more closely related to aardvarks. These tiny, diurnal, mainly insectivorous mammals, so named because of their long, mobile, trunk-like noses, are very active but are seldom seen. Both males and females are extremely territorial and when two of them come into contact, snarling, snapping and vicious fighting can take place.