There are approximately 2000 species of Mantis, all of which live in temperate and tropical regions of the world. There are over 200 species found in sub-Saharan Africa alone. Their scientific name, mantodea, translated from Greek, means prophet. The insects are colloquially called praying mantis due to their characteristic pose which so closely resembles a person with their hands clasped in prayer. However, because they are really predatory creatures, their name is sometimes incorrectly spelled as preying mantis.

All insects within this species have very distinctive triangular shaped heads which can turn almost 180 degrees in either direction. They have compound eyes with binocular vision and are able to see up to a distance of approximately 15 meters, allowing them to spot see both predators and prey very well. Although sometimes confused as being stick insects or grasshoppers, the praying mantis is most closely related to cockroaches and termites. 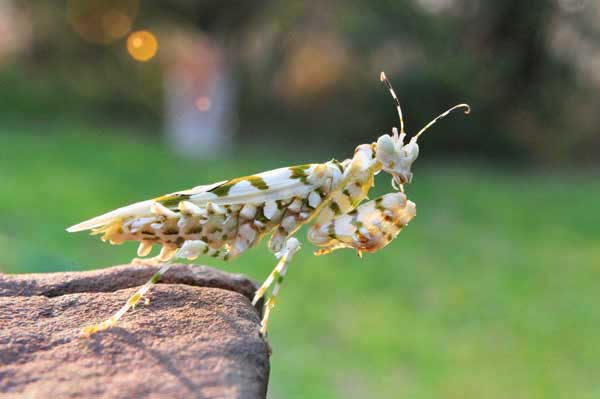 The female praying mantis is most notorious for her habit of biting off the head of her mate during or after mating. However, this trait has been mostly noted in mating pairs of captive mantises, leading to the conclusion that the behavior may be stress related, and not a common occurrence in the wild. After fertilization, depending on the species, the female will lay from a few dozen to hundreds of eggs which are generally in a protective, frothy compound which hardens around them. The eggs first develop into sexless, wingless nymphs which look much like small versions of the adult. After several moults, the nymphs emerge as adults.

The praying mantis is totally carnivorous, eating mainly insects such as butterflies, moths, crickets, grasshoppers and flies. Very large species have been seen to catch small lizards. They are also cannibalistic, not averse to eating members of their own species. They generally use coloration for camouflage, swaying silently in the breeze as they wait for their prey to move as close as possible; then, with lightning speed, they grab the insect and hold it with the hooked spines on their front legs, finally killing it with a lethal bite to the head.

In South Africa, the Khoi and San tribes call the praying mantis Hottentotsgot, which means God of the Bushmen. There is also an African belief that a mantis landing on a person is an omen of good luck. At Sabi Sabi Private Game Reserve, these normally diurnal insects are often seen around the lodge lights at night, where they stand hungrily in wait before capturing hapless insects which are attracted to, and blinded by the light.