During the rainy season in the African bushveld, water collects in small pans which may have been started by an indentation as small as a single elephant footprint. Soils with a high clay content are conducive to forming long lasting mud-wallows, as rain water doesn’t drain well from this type of ground. Wallows created in sandy soil will dry out relatively quickly. 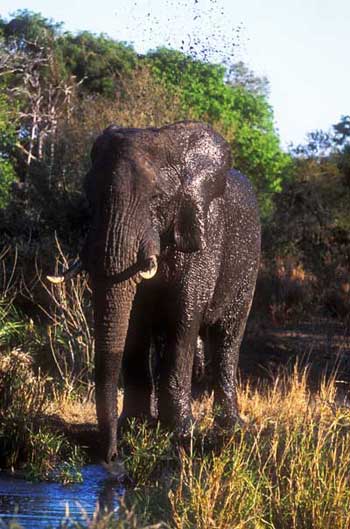 Mud-wallows (and their nearby rubbing posts), are found throughout the bushveld, their length of existence directly dependent on the number of animals visiting them on a daily basis.

The semi-permanent waterholes we see spread throughout the Sabi Sabi Reserve today might have initially started as mud-wallows, the pans becoming deeper and bigger the more regularly they are used.

Particular wallows are not “owned” by any territorial animals but are often favoured by specific species or herds.

Mud-wallows are used by a variety of animals for a number of reasons. The animals which wallow are generally those which have sparse hair and few sweat glands on their hides, species such as Cape buffalo, black & white rhino, warthogs and elephants.

These animals often stir up the mud with their feet, horns or snouts before getting down for a roll.

Wallowing acts as a cooling method. Warthog and buffalo spend time lying in mud-wallows to reduce their body temperature. Rhinos will cover their bodies in mud for the same reason, thereafter retreating to a shady area out of the sun. 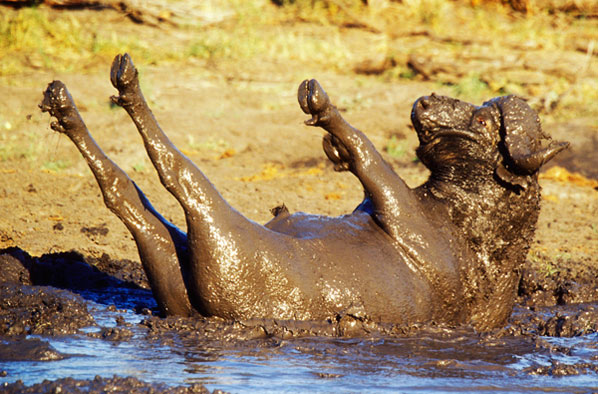 Elephants too need the cooling effect of mud to regulate their body temperature and will often submerge themselves in water before their mud or sand bath.

For all of these species the mud also acts both as a protection against sunburn and to provide relief from biting insects.

A wallow in a muddy puddle is normally followed by a good scratch against a strong rubbing post. This removes ticks and other skin parasites which become embedded in the mud.

A rubbing post can be a tree, a rock, or sometimes even a termite mound. Much used rubbing posts can eventually become very smooth and shiny and are easy to identify. 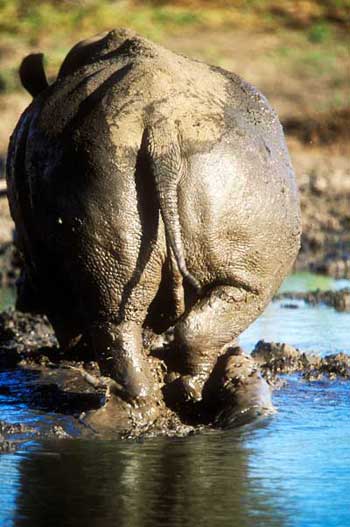 On many occasions, antelope such as tsessebe, blesbok, hartebeest and blue wildebeest have been seen to participate in a display called ‘mud-packing’, a practice in which males throw mud with their horns to intimidate their rivals. This mud is not acquired by wallowing, but by “horning” the ground. The mud on their horns makes the antelope look quite formidable, and may have the added effect of deterring predators.

At Sabi Sabi, guests are often treated to the sight of animals, if not actually rolling with great enjoyment in their mud bath, walking through the bush with distinctive muddy “high tide” marks on their bodies – evidence of their recent activity.