The Leadwood tree, Combretum Imberbe, is part of the plant family Combretaceae, which has at least 250 species. While most of the species in the combretum family are small to medium sized trees or shrubs, the Leadwood is one of the largest trees in Africa, capable of attaining a height of 20 meters.

In Latin the word combretum translates as a climbing plant, and imberbe means lack of hair, so the scientific name means a hairless climbing plant – not an impressive title for such a magnificent tree. The common name, Leadwood, perfectly describes the weight of the wood which is extremely dense and heavy. When dry this wood weighs 200 kgs per cubic meter more than water, making it one of the only woods which will sink, not float, when dropped into water. The density of the wood also makes it so resistant to wood boring insects such as termites, that 80 years after a leadwood tree has died its imposing skeleton will still remain standing intact. 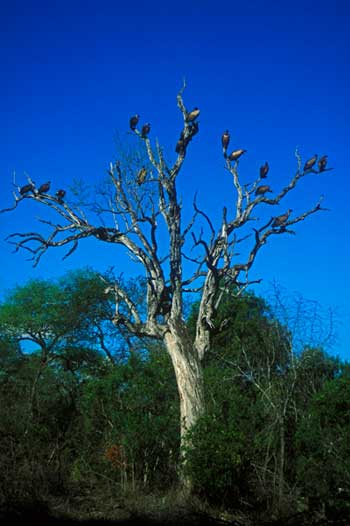 The Leadwood tree is a very long-lived but slow-growing tree, found from the southern regions of South Africa as far up the continent as Northern Tanzania. There are Leadwood trees at Sabi Sabi which are thought to be nearly a thousand years old. It flourishes in alluvial soil along dry and active river beds, and is often found in bushveld and mixed forest areas.

The trunk of the Leadwood tree is quite unique, having a greyish coloured bark with a pattern of horizontal and vertical “cracks” forming a network of rectangles. Even the leaves are greyish green on both sides, adding to the overall pale look of the tree. The leaves are eaten by many animals including elephant, giraffe, kudu and impala. With a spreading canopy, fragrant yellowish flowers and fruit which ripens to a pale red 4-winged pod in the summer, this semi-deciduous tree is striking almost all year round.

The wood of the Leadwood tree, being very dense and beautiful, makes it valuable for commercial use. This was leading to unsustainable over-exploitation of the tree in some areas – for which reason it was declared a protected species in South Africa, with hefty fines being levied even for cutting branches. However, elephants don’t obey “protected species” rules, and often break off branches of the trees, leaving the remains on the ground after they have had their fill of Leadwood leaves – and these pieces of wood can be used.

There are many traditional medicinal and conventional uses for the Leadwood tree, as well as a host of spiritual beliefs surrounding it.

The Ovambo people from Namibia never pass a Leadwood without paying respect to it, believing that the tree represents the great ancestor of all people and animals.

Bushmen will use the gummy sap from the tree as a food supplement.

The wood is so strong and durable that it was used in the last century to make railway sleepers and hoes. Although it is extremely difficult to work with, the wood is prized as a medium for making beautiful furniture.

Inhaling the smoke from the burning wood of a Leadwood tree is an ancient remedy for curing coughs and colds. The smoke from burning the leaves are also thought to offer a similar, although maybe not as potent cure, as is an infusion made from the flowers. Leadwood bark is used as a treatment for bilharzia, and the roots as a cure for infertility.

The Afrikaans name for the tree is Hardekool (hard coal), a testament to how long the wood takes to burn when used as firewood. When the fire has burnt out, the ash, with its high lime content, can be used as toothpaste.

Elliot Mgiba, a senior ranger at Sabi Sabi, remembers his grandparents carving mealie stampers (huge wooden corn bashers) out of fallen Leadwood pieces. One of the Sabi Sabi rangers, Solomon Mathebula, offered to show us how to make the traditional leadwood whitewash which was used to paint kraals (enclosures) or walls of houses.

Of course, since the declaration of the tree’s protected status, no wood can be used until a branch falls or an elephant discards his half-eaten leadwood meal.