Acacias are a genus of pod bearing trees belonging to the subfamily Mimosoideae in the family Fabaceae, the third largest family of flowering plants in the plant kingdom. The genus Acacia is mainly found in Africa and Australia, with Australian acacias generally being thornless, and the African acacias having stipular spines or recurved thorns. The Knob-thorn tree (Acacia nigrescens) forms part of this ecologically important thorn-tree family. The name is derived from the Greek words ‘ακις’ (akis,) meaning a point, spike or barb and the Latin word nigrescans meaning ‘becoming black’ – which refers to the pods which turn very dark as they ripen. 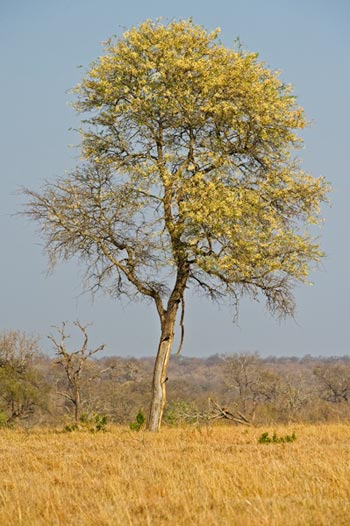 The Knob-thorn is a slow-growing, medium to tall tree reaching heights of between 8 – 20 metres. It is found growing from the wooded grasslands of the lowveld in Southern Africa to as far north as Tanzania, surviving in many different soil types. The tallest trees of this species are always found on flood plains. The Knob-thorn has a straight, upright trunk, with ascending branches forming a rounded canopy that spreads with age. The bark is dark and thickens, forming knobs several millimetres apart equipped with small black hooked thorns. These thorny knobs are prominent on the newer branches of mature trees and on the trunks of young trees, offering some protection against browsing animals such as elephants. The knobs are very conspicuous, making the Knob-thorn tree easy to identify.

The Knob-thorn is a deciduous tree, being leafless in winter. Between August and November the tree flowers. What begins as 70-100mm long elongated spikes of buds at the end of branchlets in the canopy, finally turns into scented creamy-white pom poms of flowers, totally transforming the tree. Rounded, butterfly-like double compound leaves, the largest in any of the acacia species, form in late spring. The Knob-thorn bears fruit from January to July; long, thin pods which are initially a reddish-purple colour darkening to a dark brown. These pods fall to the ground before splitting open. 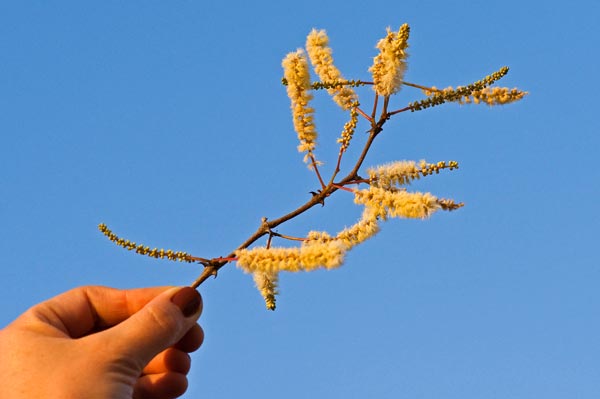 Although the Knob-thorn is very thorny, it is a highly nutritious tree, with the thorns merely limiting the amount of time animals feed on it.

Animals such as kudu, elephant and giraffe browse the leaves, baboons and vervet monkeys eat the flowers and pods. Besides the leaves, elephants also eat the roots and inner bark. 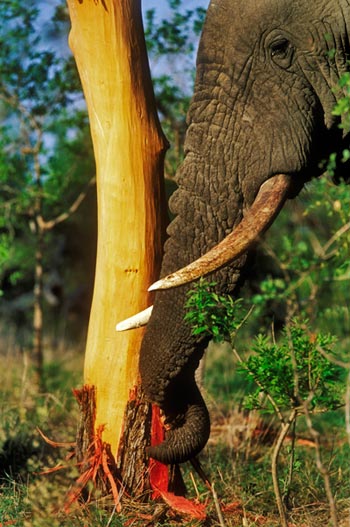 It is known that elephants sometimes feed on the bark for its natural healing properties in fighting tooth decay. Unfortunately, in pulling this toothache remedy off the tree, the elephants sometimes ring-bark the tree, which may eventually kill the Knob-thorn. Should these trees be pushed over by elephants they will seldom re-grow.

Giraffes have a very unique relationship with this acacia species – it is believed that they pollinate the trees.

The Knob-thorn is the first tree to bloom in spring, a time when food is scarce. The giraffe, with its long neck, has the ability to eat high up into the canopy, and while doing so rubs the flowers, collecting pollen which it delivers from tree to flowering tree. About 40% of the giraffe’s diet is foliage from the Knob-thorn tree, and in areas where these animals are found, the tree canopy develops an umbrella shaped browse line.

The Knob-thorn tree can tolerate drought, but it is very sensitive to frost. Hole-nesting birds make their homes in its thorny trunk and white-backed vultures tend to nest in its branches when the trees grow close to rivers. There are many commercial, medicinal and traditional uses for the hard, durable, fire-resistant and termite resistant Knob-thorn wood. 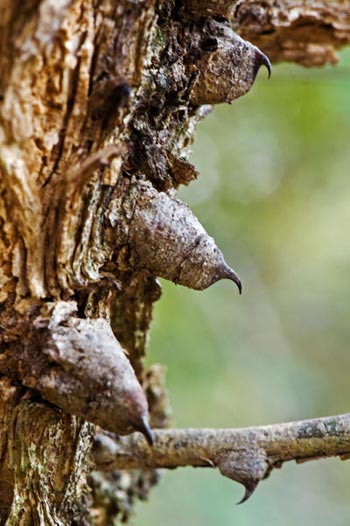 In past times the tall straight wood was a desirable material for railway sleepers, mine props and fence posts. Nowadays, in local communities, the trees are carved into “knobkerries” (traditional clubs) and walking sticks, and long poles of Knob-thorn wood are also planted next to village homes as lighting conductors. The bark has a high level of tannin that is used for tanning leather. The inner bark can be woven into strong twine.

Commercially the wood makes excellent flooring. Knob-thorn wood is an exceptional, long-burning, high heat firewood. Village healers grind the knobs into a powder which is used as a pain-killer and to cure eye infections. There is also the mythical belief that applying the powder will make young women develop large breasts.

There is an abundance of Knob-thorn trees at Sabi Sabi and at this time of the year the bright creamy yellowish flowers scattered throughout the bushveld remind us that spring has arrived.