1. Jupiter is a massive planet, the largest by far in our solar system – with a diameter 11 times that of the Earth. It is so vast that it would take 100 Earths to fill up the volume of this giant planet. It is also the fastest spinning planet in the solar system, spinning so rapidly that it has flattened out a little and is bulging at its equator. 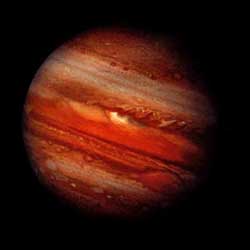 2. Jupiter has a total of 63 named satellites, with 16 having a diameter of at least 6 miles. The four largest satellites (moons), known today as the Galilean Satellites, are Io, Callisto, Europa and Ganimede. Scientists believe that the “moon” Europa rivals Mars as a potential for life-forms. Some of these scientists are urging NASA to explore the ice-covered satellite.

3. Jupiter is the 5th planet from the sun and is the 4th brightest in our solar system after the Sun, Moon and Venus.

4. The best-known feature of Jupiter is the Great Red Spot a hurricane-like storm that has persisted since Jupiter was first seen through an early telescope by Galileo in the 1600’s.

5. Jupiter is a giant ball of gas, with little, if any, solid surface. Scientists believe it to be made up of primarily hydrogen and helium, with a chemical composition resembling that of the sun. There are 3 rings around the equator, fainter than those of Saturn. The rings appear to be made up of dust.