When looking at size and weight, the question is always, how and when do big animals like elephants, rhinoceros, hippopotamus and giraffes sleep.

Adult giraffes sleep the least, requiring less sleep than most other mammals. There is much debate about how many hours in total they sleep. Estimates vary between 1 and 5 hours in a 24 hour period, with most rest being taken as short naps of just a few minutes. It is the manner in which giraffes take their very fragmented sleep that captivates us. As with other ungulates, most of their rest time is taken while standing. They will arch their necks around resting their heads on their rear-ends. At night they often sleep with their necks down. When reaching the REM (Rapid Eye Movement) stage in their sleeping cycle they need to lie down so that they don’t collapse. When getting into the lying down position, they fold their legs in underneath them and rest their heads on their rumps. They never lie on their sides as their stomach content could be ingested into their lungs causing the giraffe to suffocate. It is thought that older giraffes mostly sleep while standing, possibly because it is difficult for them to get up off the ground. In general giraffes are very vulnerable when lying down, because getting up takes a few seconds – long enough for a predator to pounce. 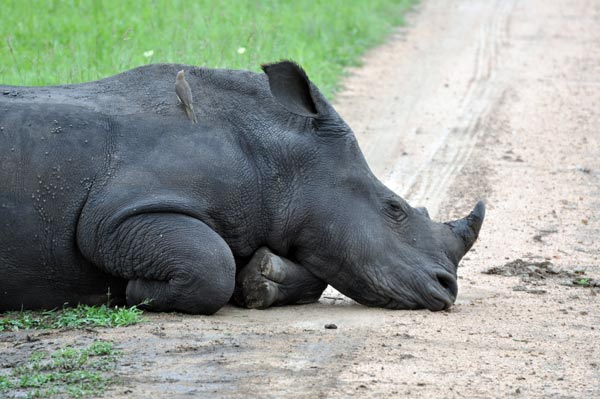 Hippos, with their sun-sensitive skins, are awake all night – out foraging far and wide for grass. All of their sleep therefore takes place during the day. Although hippos are often seen basking and sleeping on the banks of rivers, most of their sleep is actually taken inside the water – whether shallow or deep. If they are in a deep river, they will fold their ears over and close their nostrils to keep water out while they submerge. After a few minutes they will rise to the surface to breathe, and gently submerge again, all without waking up. If they are in shallow water they can be seen sleeping with their bodies under water and their nostrils protruding just above the surface.

Rhinos will sleep for around 8 hours a day. The largest part of their resting takes place when it is hottest. They will be found dozing anywhere. Lying down is done in the opposite manner to giraffes and antelope. They will drop onto their hindquarters into what look like a sitting position before they lie down with their legs and feet curled to one side. Even if they are sound asleep their tulip shaped ears scan to pick up the slightest sound – a redbilled oxpecker’s alarm call will instantaneously waken them. Although they are huge, heavy animals, it is surprising just how quickly they can get up and out of their prone position.

Elephants have many different ways of sleeping. They will lie on the ground, rest their foreheads, tusks or trunks against strong trees, or lean against termite mounts. However, they don’t have time to sleep very much. With their poor digestive systems and massive bulk, they need to spend most of their day foraging. In total they will accumulate about 4 hours of sleep in a 24 hour period, generally before dawn and in the heat of the day – although baby elephants do sleep for longer periods. When a baby elephant sleeps its mother will stand guard watching for predators. Within a breeding herd, the animals will take turns sleeping to ensure the safety of the group. An elephant that lives for 60 years will sleep for about 16% of its lifetime.

There are clearly differences in the way the big mammals sleep, and elephants, being the largest, may be the most interesting to watch. For the last several years of his life, Mandleve, the legendary big tusker, spent most of his days on the Sabi Sabi Reserve. Many visitors had the extraordinary opportunity of seeing this enormous elephant prop his massive, heavy tusks into the fork of a tree, and then silently doze for a few minutes before continuing on his weary way.