The hippopotamus (Hippopotamus amphibious) is a semi-aquatic mammal that occurs in sub-Saharan Africa, in perennial rivers such as the Sabie River which flows through the southern section of the Sabi Sabi reserve, and in permanent and semi-permanent waterholes similar to those in front of our lodges. There are several words describing a group of hippos – pod, herd, raft, and the most amusing one, a bloat. 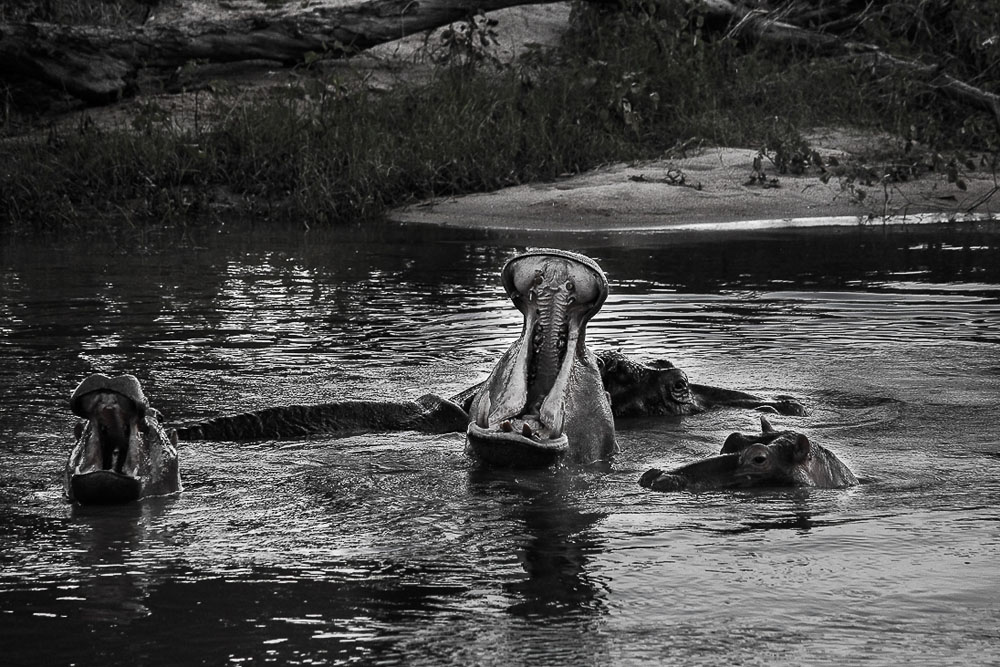 Because of their very sensitive skin, hippos spend much of the day submerged in water with only their eyes, nostrils and ears sticking out. They are however, often found sunbathing on sandbanks for a few hours at a time, and spend most of the night out of the water, walking as far as 8 kilometres to find the short grasses which are their favourite food. Their territorial areas in and around water extend only a few hundred meters, but there is no territoriality in their vast grazing areas. 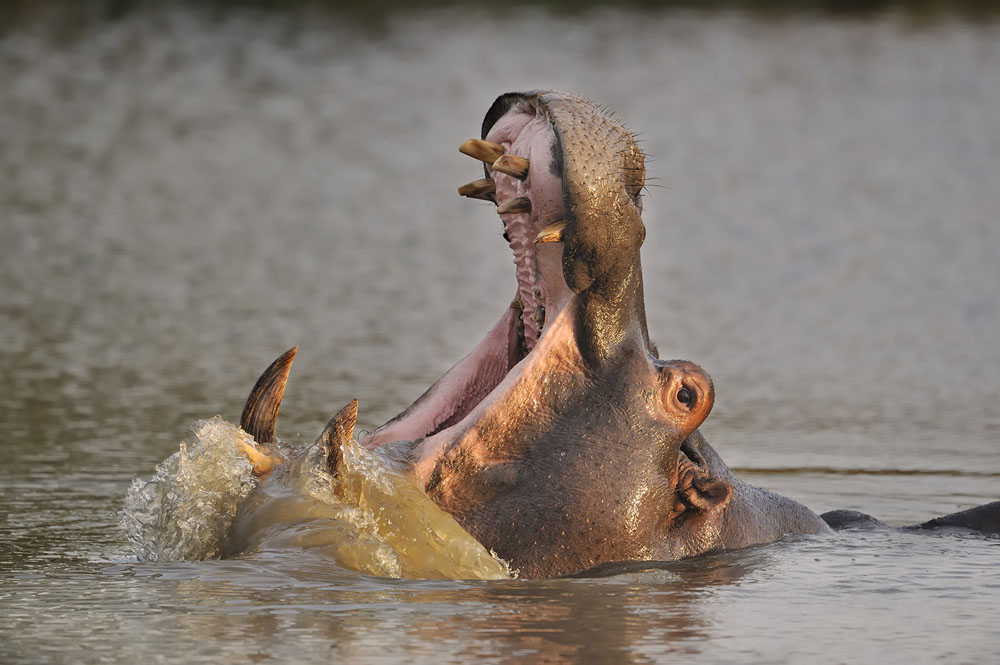 These are social animals, occurring in groups of between 5 and 30 individuals, consisting of cows, calves and bulls. The group is led by one dominant territorial bull which strictly controls its mating territory. Younger or other males are tolerated only if they are submissive and leave the females alone. Hippo challenges are fearsome fights, their long canines inflicting gaping wounds or even causing death. Losing a challenge forces the defeated hippo to find a new home. Moving to a new waterhole is most often done at night, as was evidenced by our guests who woke up one morning to suddenly find a hippo in Bush Lodge’s waterhole. Territorial bulls can remain in the same territory for over 8 years. The hippo in the waterhole at Bush Lodge only stayed for a week or so before he moved on to “greener grass”.

The waterhole in front of Earth Lodge has had a resident hippo for quite some time. On every morning safari we can clearly see by his tracks where he has ventured during the night. Their large tracks, ranging from 25 – 30cm in length, attest to the impressive size of this enormous animal – the third largest land mammal after elephant and rhino. But don’t be fooled by the hippo’s large body and short legs: it is able to climb steep embankments when exploring new waters for females and can run at speeds of up to 30 kilometres per hour.

Hippos eat vast quantities of grass, making their droppings similar in texture to those of elephants and rhinos, but hippo droppings are smaller. They defecate mainly in water (promoting the growth of fish food), as well as on land. Perhaps the most obvious sign of a hippo’s presence is the accumulation of broken-up dung clinging to bushes. Dominant bulls engage in a behaviour called dung-showering, during which the hippo will reverse into a bush and flick his short fat tail backwards and forwards, spreading the dung and his scent. This very visible dung spray can easily be seen at the waterhole in front of Earth Lodge, where the resident hippo continually marks his territory.