The banded legged nephilia, commonly known as the golden orb spider, is a member of the nephila genus of arachnids. There are many species of nephila around the world, often referred to as golden orb-weavers, giant wood spiders or banana spiders.

The genus name roughly translated from Ancient Greek, means “fond of spinning”, a testament to the enormous webs the golden orbs weave. The golden orb’s web has been seen to start at the top of a 6 metre tree and stretch as much as 2 metres across. Whereas most other spider webs are short-lived, these impressive structures can last for years. 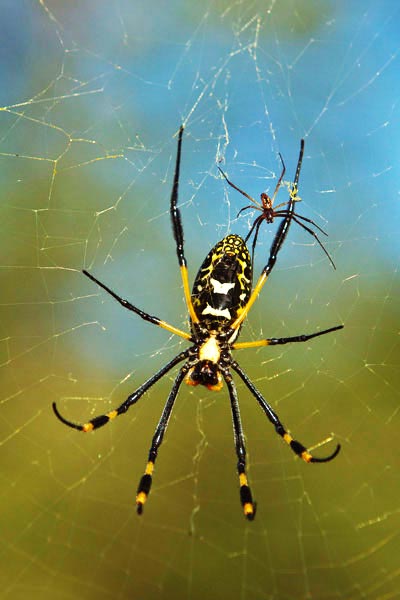 The golden orb spider is so named because of the colour of its silk. It is thought that this colour may serve two purposes; in the sunlight it will attract bees drawn to the bright yellow, whereas in shadow it becomes camouflaged into the foliage, thus ensnaring other insects.

The spider is able to adjust the amount of pigment in the silk, thus changing the intensity of colour of the thread.

Its size and formidable looks make this one of the most recognisable and easy to identify spider species. Although it is frightening to look at, this spider is non-aggressive and relatively harmless. It can deliver a painful bite if severely provoked, but the venom is not lethal, generally only causing redness and blistering.

A female golden orb spider can have an abdomen of up to 30mm long. She dwarfs the tiny 5mm male in both size and weight. In almost all nephila species the male is in danger of being devoured by the female after mating. To avoid being cannibalised, the male will approach the female when she is already feeding, or present her with a parcel of food to eat. Whilst the female is distracted, the male will fertilize her and then retreat to a safe distance.

The silk of this species is incredibly strong. It can even trap small birds. There is a theory that if were possible to weave a line of the silk to a thickness of a small pencil, it would be able to withstand and repel a 747 jumbo jet at maximum speed. In some tribal communities, the web silk is used to make fishing lures and traps. Fishermen on the islands of the Indo-Pacific roll the nets into a ball and throw them into the water. The ball unrolls and is then used as a net to catch bait fish. Efforts to use the silk commercially to manufacture cloth have failed; however, there has been some promising research on the silk in the field of tissue engineering for medical use.