Over many eons, several animal species have developed adaptations which enable them to use limbs and other modified appendages on their bodies as “tools”. These profound evolutionary changes are all part of the on-going quest for survival.

The rhinoceros evolved from a small, hornless ancestor which looked much like a little horse.

There are two kinds of rhino species at Sabi Sabi. The white rhinoceros (Ceratotherium simum) is the more common, social and non-aggressive of the two. The black rhinoceros (Diceros bicornis) is smaller in size and is a secretive, solitary and more belligerent animal. Both species of rhino have continually growing horns on their snouts, a larger, longer one in the front with a shorter horn behind. While most animal horns have a bony core, there is no bone whatsoever in rhino horns – they are composed entirely of keratin, a mass of tubular filaments similar in substance to hair and fingernails. Unlike antelope, rhino horns are not attached to the bone of the skull. White rhinos use their horns on a regular basis to enlarge mud wallows which they frequent on hot summer days. They use mud-wallowing as a means of thermoregulation, and for the purpose of coating the body with a layer of mud to rid themselves of ecto-parasites. Rhinos fight with their horns, sometimes impaling and severely injuring their adversaries. These fights are generally over dominance, for females or for territory.

Elephants form part of the order Proboscidae, the earliest known members of which were little pig sized animals which lived about 60 million years ago. African elephants(Loxodonta africana) are the world’s largest land mammals with their closest living land-based relatives being hyraxes.

Elephant tusks, which grow most of the elephant’s life, are the elongated modified upper incisors which replace tiny milk tusks when the animal is about a year old. Both male and female African elephants have tusks, which are remarkable tools. In feeding, they are used to loosen the bark off tree trunks, to dig for roots, bulbs or even salt, to push over trees and break branches. As a weapon the tusks are used in violent confrontations between males when competing for females or by either sex when chasing off predators. Elephants are either right or left tusked, with the favoured tusk being more used as a tool. This tusk is shorter and more worn down. There is at present a theory that elephants are rapidly evolving smaller tusks due to prized big-tusked elephants being poached and smaller tusked elephant genes becoming dominant.

The African elephant trunk (proboscis) is its most specialised appendage; a merged upper lip and nose with about 100,000 different muscles controlling its many movements. It is used to breathe, smell, to siphon water, to dust with sand and spray with water, for gathering food as well as to strengthen social bonds.

The trunk, which ends in two sensitive finger-like projections capable of gently picking berries, fruit or a single leaf, can extend to a great length. It can twist and coil to break branches and trees. When drinking, water is sucked into the elephant’s trunk and then squirted into its mouth.

About 260 million years ago, the first four-legged animals developed adaptions for climbing in trees. Claws were one of these specialisations.

Leopards (Panthera pardus), are the largest spotted cats in Africa. They are solitary animals except during the mating season or when a female is accompanied by juveniles. Leopards, like all cats, have five toes on the front feet and four on the hind which are equipped with strong, very sharp, curved claws. These claws are tools used as weapons in fighting, hunting and climbing. 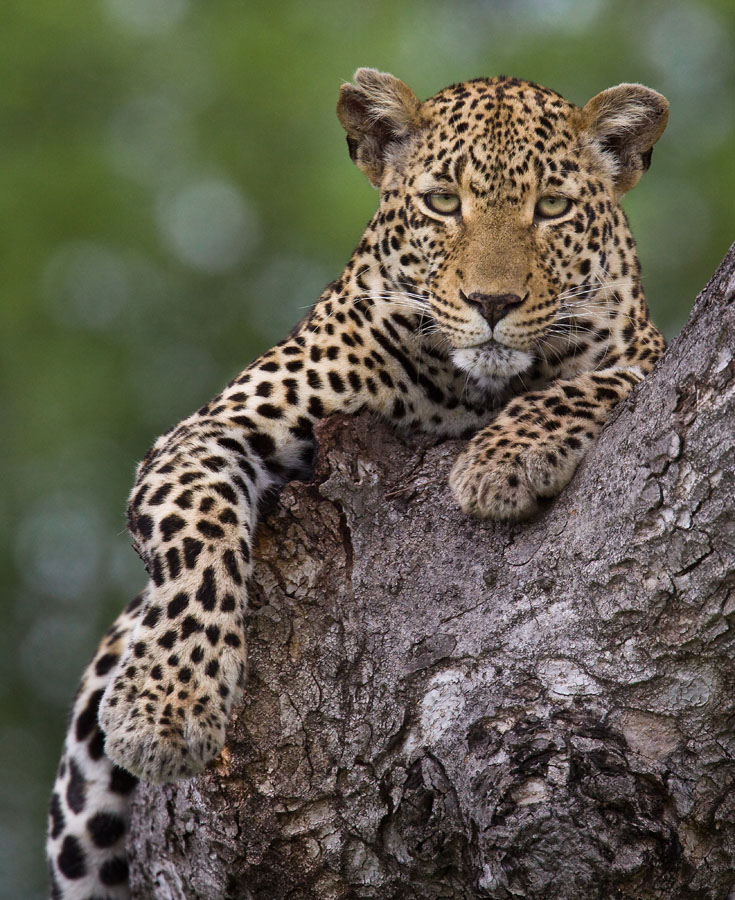 The claws are normally retracted to protect them from injury and are extended when necessary. Leopards utilize these razor-sharp claws and their great strength to hoist their kills high up into the trees away from scavengers and other large predators.