Bats are the second most diverse order of mammals in the world with over a 1 000 described species. Megabats, otherwise known as fruit bats or flying foxes, are members of the Chiroptera order and the Pteropodidae family. Among these there are several species of epauletted fruit bats which occur in Southern Africa, the most common being the Wahlberg and Peters, both of which can be found in the Sabi Sabi area.

Another epauletted species, the Straw Coloured fruit bat, is less common and is on the IUCN Red List as a threatened species. 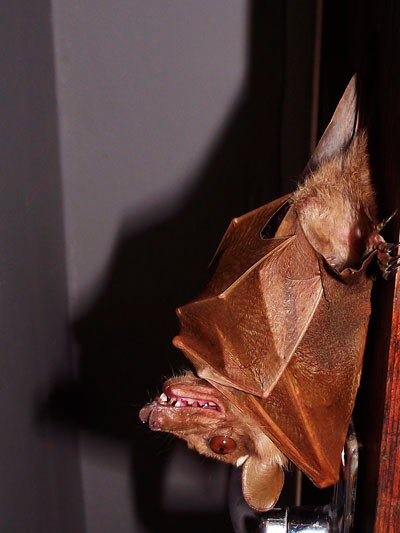 Although known as megabats, some of the species in this family are only just over 2 inches long. The Southern African Epauletted fruit bats however, are larger, attaining a length of between 12 and 25 cms, and weighing 80gr. on average. They have prominent chest bones to which are attached very powerful muscles which control the long wings. On the leading edge of the wing there is a sharp claw.Unlike most other bats, these fruit bats don’t only rely on echolocation to navigate. They have very large eyes and a keen sense of smell which they use to find their way and to locate their food.

These creatures are nocturnal, and are found in woodland, savannah and the edges of forests, hanging from their feet in the foliage under the canopy of evergreen trees. While in this position they may have their wings wrapped around their bodies, or, if is very hot, they will use their wings to fan themselves. They are sometimes found in colonies of up to hundreds of bats. Interestingly enough, although they are excellent at flying, they are not good at landing. Here they are extremely ungraceful, crashing in trees and trying to catch branches as they attempt to stop.

The Southern African fruit bats are mostly frugivorous, meaning fruit-eating. Their diet is largely very ripe soft-fleshed, pulpy fruits such as guavas, mangos, peaches and figs and they will remain in areas close to fruit bearing trees whether in the wild or near cultivated areas. Sometimes only the juice of the fruit is consumed, with the seeds being discarded. This serves the very important purpose of distributing fruit seeds across the countryside. They do not require any water, getting all their liquid requirements from the fruit.

The word Epaulette refers to the white fur on the male bats’ shoulders which covers a sunken glandular pouch. When the bat is stressed, vocalises, or during courtship displays, the pouches turn outwards, making the white hair very prominent. It is surmised that the white may also be for camouflage, making the upside-down bat blend into dappled light when viewed from the ground during daylight. The females produce a single young called a pup, which will cling to one of it’s mothers nipples while she forages and feeds.

There are abundant African myths surrounding bats. Beliefs include that of the bat being an evil bringer of disease, a spirit of the dead wandering the earth and haunting the living, or a kidnapper of unwary travellers. However, other than being a pest to farmers, bats have little contact with people, will not get caught in hair and certainly do not drink human blood. In South Africa all bat species either eat fruit, nectar or insects.