Summer nights at Sabi Sabi are filled with a cacophony of song as the nocturnal species begin their extraordinary sound rituals. Once the daily temperatures rise and the rains have begun, the amazing variety of frogs in the bushveld are stimulated to call.

Two Bush Lodge rangers, Wim and Calvin, decided to go frogging one evening to find species which are more often heard than seen. Within a few hours they came across the Bushveld Rain Frog, Eastern Olive Toad and the Painted Reed Frog. 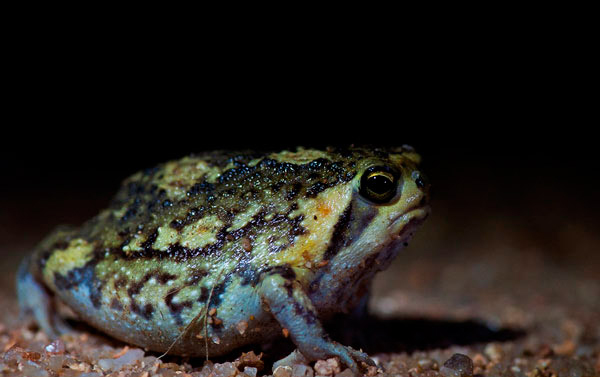 Bushveld Rain Frogs are terrestrial frogs found in the southern part of the African continent. These rain frogs are fat, short legged, and mottled brown, with variable yellow-brown patches on their rough, granular skin. They are burrowing frogs which live underground in terrain where there is suitable soil for their digging habits. They have conspicuous spade-like hard ridges on the heel of each hind foot that are used when digging tunnels backwards into the soil.

Bushveld Rain Frogs will only become active after rain, generally emerging at night to feed and mate, (they only breed in the rainy season). Initially the males will call from their shallow tunnels in the hope that females will rush over. If this fails they will move around later in the evening trying to find mobile females. Females of the species have mottled throats, with those of the males being black. The females are also substantially larger than the males. Because of the size difference and their short legs, conventional mounting during mating is not possible. Instead the female secrets a “glue-like” substance on her back which keeps the pair together at the contact area. Glued together, the pair lay their eggs in a chamber in the ground. The glue will slowly break down and the male and female will go their separate ways.

In case of danger the Bushveld Rain Frog has the ability to blow up its short fat body to appear larger than usual. 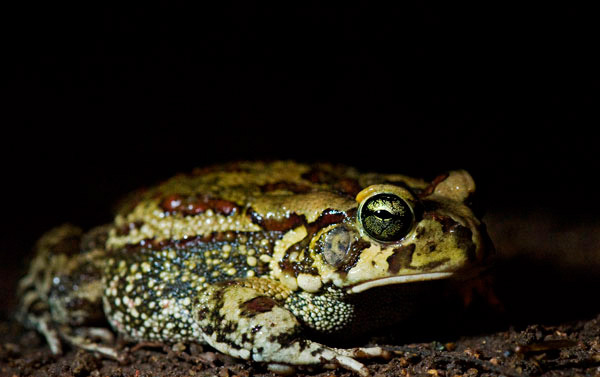 The Eastern Olive Toad is a medium to large size toad (40 – 140mm) with a square sturdy body. Unlike the Bushveld Rain Frog above, this species has legs which are longer than its body. Because these toads live and breed in pans and marshy areas, they will only survive in parts of the continent where there is a rainfall of more than 600mm. They have dark patches on their backs, granular white skin on their bellies, and red markings on the inner legs. On either side of their necks they have parotoid glands which secrete a poisonous substance when the toads are stressed. 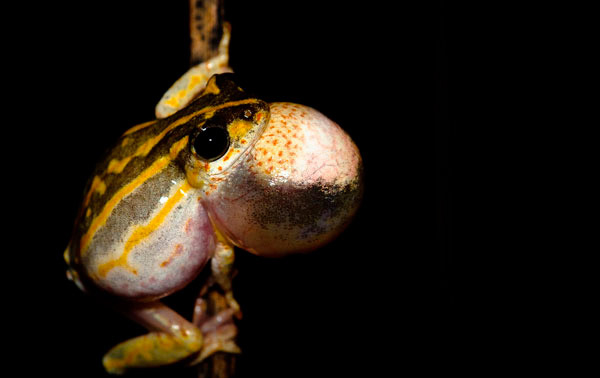 The colourful Painted Reed Frog, a small (20 – 35mm) frog also known as the Marble Reed Frog, is a must-see at Sabi Sabi. This is sub-tropical frog species that is fairly widely spread in southern Africa, in savannah areas, along river courses and streams and seasonal pans. It is right at home in the reed-beds along the rivers at Sabi Sabi.

Painted Reed Frogs have slender bodies, large eyes, long thin legs and no noticeable neck. Their brightly coloured patterning is quite varied, including stripes and spots. Even with all their colour they are fairly difficult to find, and are mostly seen when they jump, exposing the bright colours on the inner part of their legs. Painted Reed Frogs have sucker-like pads on the ends of their toes which allow the frogs to climb slippery reeds and plants.

Although you cannot always see them you can most definitely hear their unique loud call. The male has a large vocal sac situated on his throat that inflates and deflates like a balloon when he calls. When collapsed a thick disk of skin covers and protects the very fragile vocal sac. In the mating season, the male will use his toe suckers to climb high up the reeds stems, inflate his vocal sac and call the females with a loud piping whistle. When two males are close together their whistling call becomes a threatening screech and if in reach of one another they will try and kick each one until one of them retreats. These frogs also call in chorus, with the sound carrying over long distances.