In the natural world, there is nothing more important than passing on your genetic material. However, parenting, as I’m sure many of you know, is a time consuming job. Mothers of all species will do whatever it takes to ensure the safe passage of children to adulthood and hopefully raise offspring that are capable of further expanding the individual’s genetic line. There is one family of birds however, that has found a loop hole in the parenting contract, and these are the cuckoos.

Cuckoos are the evil geniuses of the animal kingdom. Instead of building a nest of their own and investing all their time and effort into raising their offspring, the cuckoos palm off their chicks to other species and let them do the hard work. The species that take on the task of raising the cuckoos’ chicks are unaware that they have been duped into sacrificing their time and energy, and treat the imposters as their own. This behaviour is known as brood parasitism.

The idea in theory is a great one but how do you persuade a bird of an entirely different species to undertake such a role? The first issue that the cuckoos face is how to get their egg into the host nest in the first place. Birds are the same as all other animals and will protect their homes at all costs, chasing off potential predators and competitors alike. To counteract this, the cuckoos have a unique method of gaining access to the nest. In fact, they are the special forces of the avian world. A female cuckoo will loiter close to the nest of a potential host, unseen and unheard. The male cuckoo will make itself known to the host bird and because the target recognizes the threat, it follows animal protocol and takes off after the male, believing that it is eradicating the danger. This leaves the nest momentarily unattended and the female simply emerges from her concealed position and takes advantage of the time space that the male has given her. 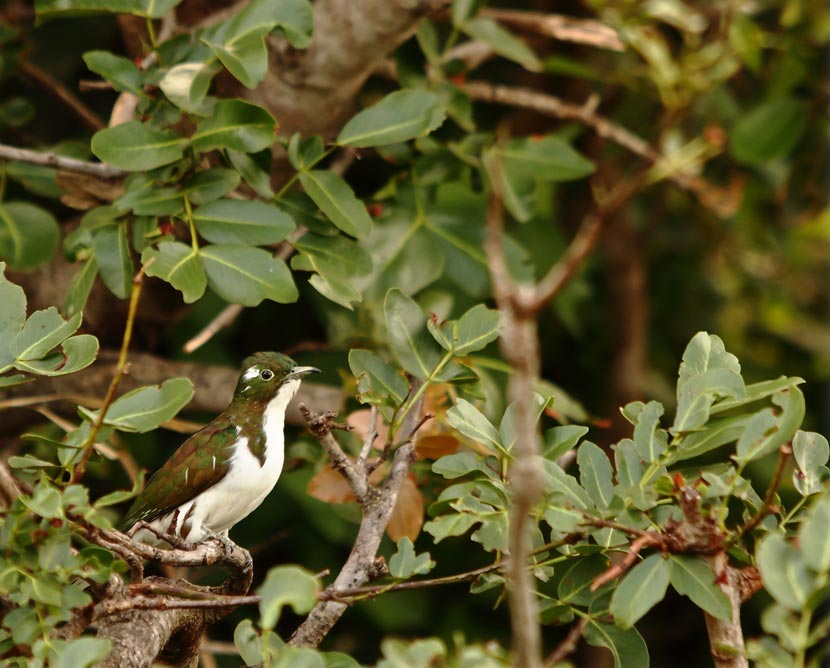 The window of opportunity is only small however as the host bird will soon return to the nest and her clutch. Therefore the cuckoo has one of the shortest egg-laying times of all bird species and can lay her egg in as little as 10 seconds! Cuckoos have very small eggs which are quick and easy to produce. As most of the host species are smaller than the cuckoo, the small egg also helps to continue the charade that nothing is amiss… However, some birds can count and would notice an addition to their clutch. The cunning cuckoo counteracts this by removing an existing egg thereby leaving the numbers the same. The host returns, proud of its achievement of chasing away the threat and settles down to incubate the imposter egg in addition to its own.

The story does not end there however. The cuckoos want to have their cake, and eat it! Not only do they want foster parents to do the hard work for them but they want their chick to prosper, usually at the host offsprings’ cost. Cuckoo chicks generally hatch before the hosts chicks, thus ensuring a head start in the development process. There is no sharing in the world of young animals and the stronger the chick, the more food it can procure. In fact, the chicks are pre-programmed to do more than just out-compete their foster siblings; many will remove the competition all-together. Most cuckoo chicks are born with a concave cavity in their backs which they will use this to shove unhatched rival eggs from the nest. This leaves them as the only chick in the clutch, receiving all the benefits of the parent’s hard work! Most also have large feet and will trample their smaller competitors to death. The Honeyguide family takes things a step further and the youngsters are born with a ‘bill hook’: a weapon on their bill that they use to literally stab and murder the host’s young!

Birds are not known for their cognitive ability and whilst it may seem inconceivable to us that a small bird, like a weaver, could raise a large chick, like a Diedericks cuckoo (pictured), the host bird remains oblivious. In some species, the chick reaches double the size of the adult before it becomes independent and one can only imagine how proud the parents are of producing such a strapping young child! What is perhaps the most remarkable of all is how the young cuckoo does not grow up suffering from an identity crisis. It never lays eyes on its parents nor any member of its own species; it never hears the language spoken by its own kind and is certainly never instructed on the more complicated issues in life such as migratory patterns.

Nature’s design has found a way to pre-programme the cuckoo chick with all the information it will ever need. Somehow, the fostered cuckoo grows up with an understanding of everything necessary to be a cuckoo. It will be able to recognise members of its own species by sight and sound, thereby enabling it to find a mate. It will know when and where to migrate in order to be with its peers and it will be able to identify the species of bird whose nest it will one day parasitise.

You may not like the cuckoo’s rather Machiavellian approach to parenting, but in some ways it is genius. Why waste the time nest building, incubating, feeding and nurturing your young if you can get someone to do it free of charge? The less time it has to spend parenting, the more eggs it can produce in a season and the better the chances of its genetic survival. The brood parasites merely go to show that nothing in nature is absolute. No niche or opportunity is overlooked and it adds another fascinating facet to life in the bushveld.