One of the most fascinating facets of a safari experience is watching the highly skilled trackers interpret the movement of animals from the signs left behind on the sand roads. The art of tracking is an acquired skill and as with all skills some people are blessed with natural ability. Tracking though, is not something that can be learned from a book. Most of the local Shangaan trackers working at Sabi Sabi have grown up in the area and have been taught by their fathers. They have also attended courses to refine their skills. For many, looking after the family’s cattle as a child has helped to develop their abilities. One of my former trackers once told me that his responsibility was to find the cattle each morning – this meant learning to distinguish his father’s cattle from the neighbour’s, merely by looking at the spoor!?

The most commonly tracked animals on safari are lion and leopard. Both belonging to the cat family (felidae) they share many similarities (taxonomy uses foot structure as one of its classification methods). The 2 main clues that the trackers look for when identifying a footprint are the back pad and the presence or absence of claws. All cats, from your cute little kitty-cat at home to the lions and leopards that roam the African bush, have 3 lobes on their back pad. Only felines display this trait and for those of you with domestic cats, you are welcome to check this! The dog family (canidae) and hyena family (hyenidae) only have 2 lobes. With a large number of hyenas wandering through the landscape after dark, the number of lobes is the first detail to check to eliminate misidentifying the spoor. 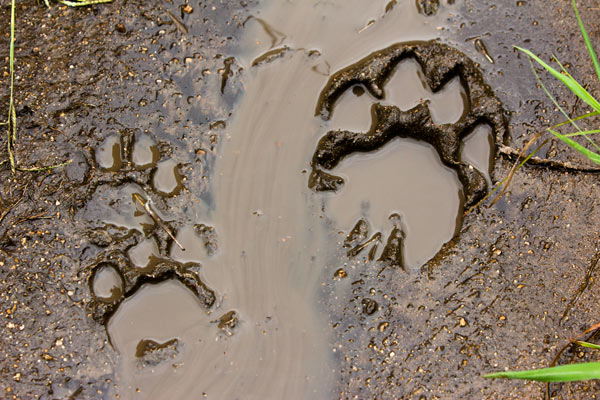 The second important characteristic to check is whether or not there is any evidence of claws. All cats have retractable claws and thus any lion or leopard track will show no trace of claw impressions in the substrate. Dogs’ and hyenas’ claws are always exposed and in the soft sandy roads of Sabi Sabi they are usually visible, thus enabling us to achieve a positive identification. There are exceptions to every rule of course…the cheetah has 3 lobes on its back pad and semi-retractable claws which do leave impressions in the track. This however, makes it easy to recognize as the cheetah is the only animal here to have both characteristics.

Once the spoor has been established as a ‘cat track’, the next part of the detective work is to identify the species involved and this is done simply by size. A large male lion for example can reach over 200kgs whilst a large male leopard only weighs 80kgs. Therefore, a lion track is much larger than a leopard’s as a larger surface area is needed to carry its extra body weight. In both species, size again should be able to define the sex due to the weight difference between males and females.

Specifics can also be assumed due to the individual characteristics of the track. For example, in all animals, the front feet are larger than the back due to the extra weight of the head and shoulders and this will be reflected in the shape of the spoor. The front paw of a lion will be far larger and broader than the back. Right and left can also be distinguished by looking at the toe arrangement. If you look at your own hands for reference, you will see that your outside finger (i.e. little finger) is the shortest. This is exactly the same in animals and so if you can identify which toe is the shortest or closest to the pad, this will show you whether it is the right or left paw. 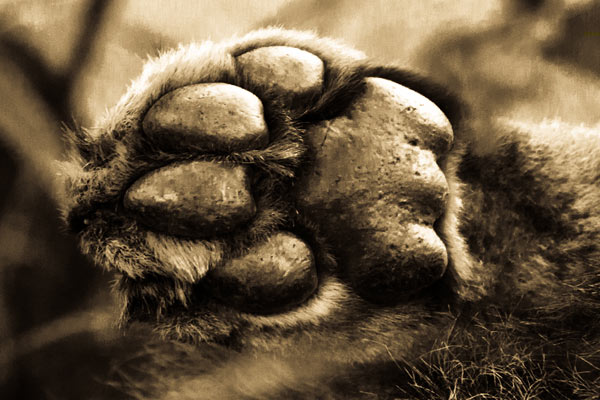 This picture shows both male lion and male leopard tracks. The larger track on the right is from a male lion and due to its size, we know that it is the front right foot by looking at the details: the impression is too large and broad to be a back foot. You can clearly see that the furthest right toe is the shortest, thus telling us it is a right front foot. The tracks to the left are from a male leopard. Here you can instantly see the size difference between the two cats. The track closest to the bottom of the photo is the front foot and the one in front is the rear foot. Again, you can see the size difference between the two and at a standard walking gait, the back foot usually outpaces the front. This will obviously change should the animal be trotting or running. The front paw’s toes are obscured by the standing water but in the back foot, again it is the furthest right toe that is closest to the pad and thus can be assumed to be a right paw.

The art of tracking is not something that can be studied in theory, it can only be achieved through experience. The interpretive skills of the trackers at Sabi Sabi are fascinating and guests and rangers alike can learn so much from these wise men. They are the CSI division of the safari department! Where they really come into their own is with ageing the tracks – determining how old they are and therefore how long since the animal walked by. They will look for signs of weathering from environmental factors and the presence of other tracks on top of the spoor to name a few. The trackers are the unsung heroes of the reserve and whilst your ranger can explain the environment to you, these elite men can read the bushveld better than anyone.