The African Civet is an elusive nocturnal creature which is mostly active from two to three hours after dark until midnight. It seeks out a wide variety of prey and will eat anything from insects to small vertebrates, which it kills by biting the creature over and over again. It then rips the food apart by using its forepaws to hold the prey item down. 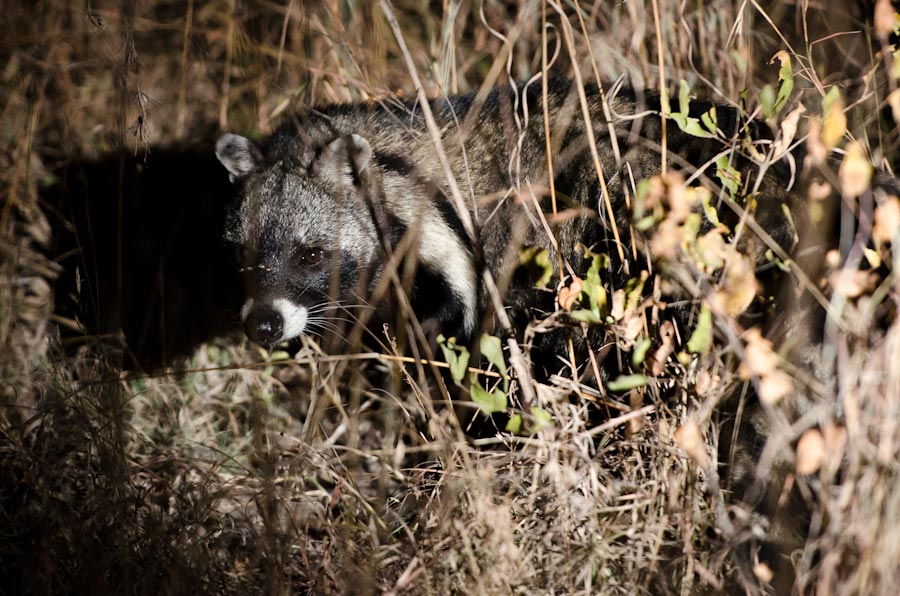 One of its most enjoyed foods is the poisonous millipede, an arthropod which contains cyanide which is released when the millipede is exposed to acidic digestive juices. It is believed that this potential cyanide poisoning is counteracted by the civet eating the fruits of certain trees. The fruit neutralises the civet’s stomach acids thereby allowing it to safely eat the millipede.

The civet has been used commercially for some very lucrative businesses, the first of which is in the manufacture of perfume. A secretion from the anal gland which it uses to mark territory and maintains a strong odour for up to 3 months, has been used as a fixative in perfume. Another well-known use for some species of civets is in the production of the most expensive coffee in the world, Kopi Luwak otherwise known as Civet Coffee. Coffee berry beans are fed to the civet, and these beans then pass through its digestive system, to be collected once the civet has defecated. The beans are washed, ground and roasted, with the processed Kopi Luwak coffee reaching prices of more than $300 per pound.