Woven into their game drives the Sabi Sabi game rangers find and explain the many smaller, less conspicuous, but absolutely fascinating events in nature. Coming back from a safari, one of our rangers was very excited to share video footage where he captured one of the unique behaviours acted out by birds – dust bathing.

It is extremely important for birds to constantly groom their feathers in order to keep them clean and functional. Most birds have a preen gland which secretes an oil used for preening and grooming. Dust bathing helps absorb any excess oil and also removes dry skin and other debris. Birds which don’t regularly dust bathe will have feathers which are oily and matted. Bird species which do not have preen glands still use dust baths to help keep their feathers clean and dry. 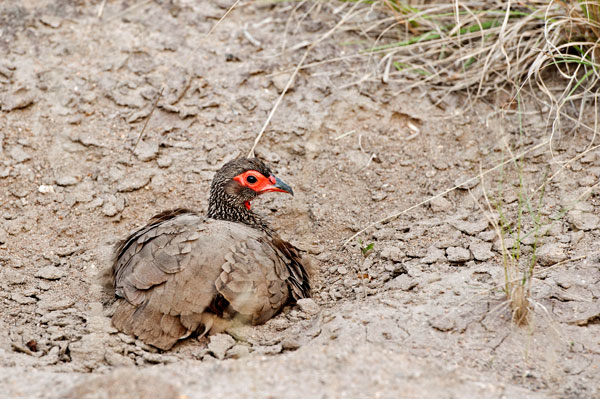 While dust is not something we would normally associate with cleaning, the main goal here is to discourage parasite infestation.

In areas with a lot of easily available water, water bathing is the norm, whereas in dryer areas, dust bathing is more common and appears to take the place of water bathing. Unless there is already a sandy patch, the birds will need to create their own dust. They do so by fluffing their feathers to expose bare skin, rocking and wiggling their bodies close to the ground and opening either one or both wings. This behaviour disturbs the soil and causes a dust cloud which then settles onto the bird, – which will then shake off the dust, followed by preening and grooming. The bird may even rub its head into the sand. Caged birds which have never been previously exposed to sand have also been seen to exhibit the dust bathing behaviour when presented with the opportunity. Other than the fact that one bath is wet and the other dry, during dust or water bathing birds use much the same methods and movements to clean themselves.

Another unique “feather” ritual is known as anting – a strange behaviour which, it is believed, removes parasites. More than 200 species of birds have been recorded displaying this behaviour.

There are two kinds of anting – passive and active. Passive anting is when the bird finds an ant nest, and then lies down on the nest sand, allowing the ants to crawl onto its feathers. After a sufficient number of ants climb onto the bird, it will shake its feathers causing the ants to secrete formic acid. Once the ants have discharged their acid, the bird may eat them. It is possible that the acid may also act as an insecticide or fungicide, but there is no real scientific evidence of this.

During active anting the bird will actually pick up the ants and wipe them over its plumage. Once the stroking is complete and the ants have discharged their acid, the ants are either eaten, or thrown away.

Anting and dust bathing are equally efficient methods of removing parasites, but anting is far less common, and is one of the more unique behaviours in the animal world.