Paradise Flycatchers are intra-Africa migrants which are found throughout most of Sub-Saharan Africa, excluding the south-western section. They are well adapted to riverine and open forests, woodlands or savannah habitats, and are regularly found in cultivated gardens in highly populated areas.

The African Paradise Flycatcher (Terpsiphone viridis) is one of 8 flycatchers found in our region and is definitely the prettiest of the flycatchers seen at Sabi Sabi Private Game Reserve. Belonging to the family Monarchidae, this particular species is the most widely distributed, and is a common resident as far south as the tip of the Western Cape Province of South Africa.

Flycatchers are perching (passerine) birds, sitting upright on their short legs on small branches hawking and catching flying insects in mid-air, or darting under foliage to glean tasty prey.

Their diet is not just limited to flies; they will eat many types of insects including beetles, moths, butterflies and various other prey items – even ants or spiders. 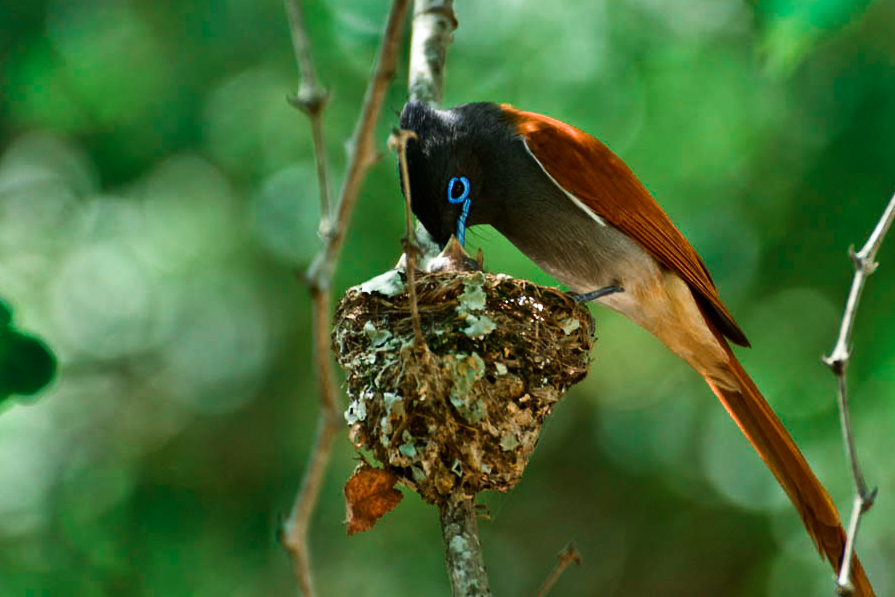 The African Paradise Flycatcher is quite a vocal bird, often heard long before it is sighted. Its call seems to vary in different parts of the continent. In the Sabi Sabi region it has a raspy, shrill contact and alarm call, but its song is a very pleasant rippling warble.

Although there are many flycatcher species, this is the most beautiful of all. With an iridescent, crested grey head, bright blue bill and eye wattle, chestnut-orange back and wings, this bird doesn’t need to be shy about its looks.

Unlike many other bird species, both the male and female Paradise Flycatchers are similarly brightly coloured.

They have fairly long tails which make them appear larger than their actual medium size, but in the breeding season the two central feathers of the male’s tail can almost double in length to over 30cms.

During the mating season the male will put on a colourful courtship display, sometime to several females at once, flying in a bobbing motion to best expose his bright under parts and long flashy tail.

Once settled onto a branch he will call the females closer with his bill wide open, exposing the bright inside of his mouth, while at the same time quivering his wings and sweeping his long tail back and forth.

He may even add a little dance to his display.

Once a mate is chosen and accepted, African Paradise Flycatchers are monogamous, pairing for life.

African Paradise Flycatchers are co-operative breeders and building the nest and incubating the eggs is a job equally shared by both sexes.

The nest is built as high up as possible in the fork of a tree, between 2-10 meters above the ground. The nest is a wonderfully crafted, tiny, neat eggcup-shaped construction of both fine and coarse material. 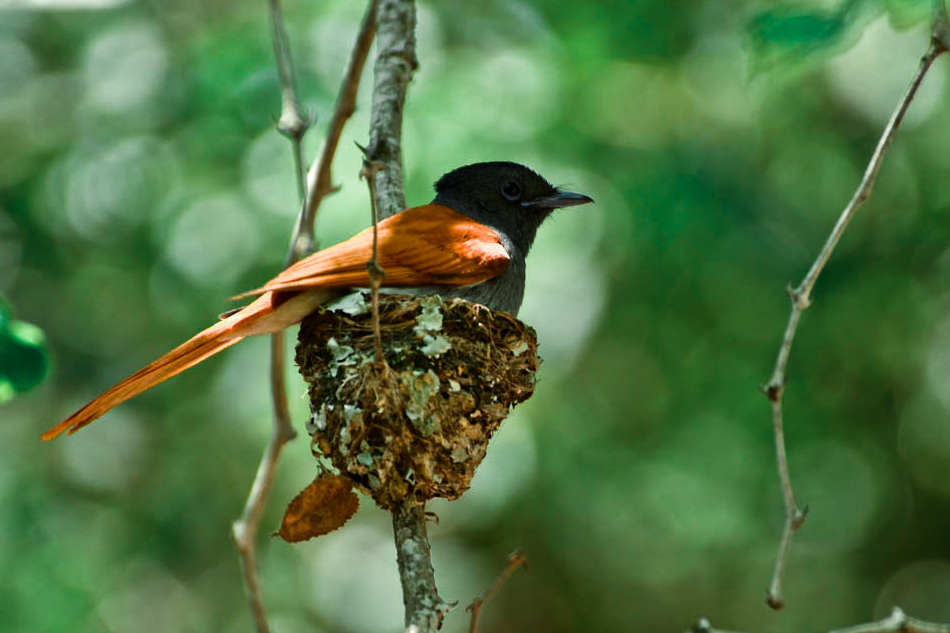 Coarse matter such as branches or bark are used for the framework and once that is done the nest will be lined and camouflaged with soft grass, lichen, leaves or even animal hair, uniquely held together by spider web.

Breeding and egg-laying season varies from one region to another but in the Sabi Sabi Private Game Reserve it peaks between October and January. Males defend the territory surrounding their nest and in the case of a few nests close together, will defend the territory communally.

The female lays 2 -5 eggs, with incubation being 13 – 15 days. New-born chicks are fed for at least a week after they have left the nest. Unfortunately, if the nests are found by Diderick Cuckoos, Green-backed Honeybirds or Jacobin Cuckoos, these brood parasites may forcefully remove the flycatcher’s eggs leaving their own eggs and subsequent young to be incubated and fed by the flycatchers.

Guests at Little Bush Camp recently had the privilege of observing two Paradise Flycatchers on their amazing nest, in their natural environment – the pristine Sabi Sabi bushveld.