The winter night sky at Sabi Sabi is one of the most amazing things to see. I have been photographing the stars a lot and trying to find new ways of doing it. After some extensive reading I decided to try stitching multiple photos of the stars together to form one great image.

Equipment that is necessary:

So for this photo-shoot I set everything up in a nice open area, which allowed for a great expanse of stars and a low photography angle. I then took a couple of test images to get the best timing. Then came the difficult part. I set my Nikon D3s up to capture landscape with the Nikkor 24-70mm at its widest and then took the photo in manual mode bumping the ISO up to 3200, aperture wide open at f2.8 and a shutter speed of 20 seconds. After each image I had to angle the camera higher to get the next part of the sky and did this to create what would end up being a portrait shot of the Milky Way. 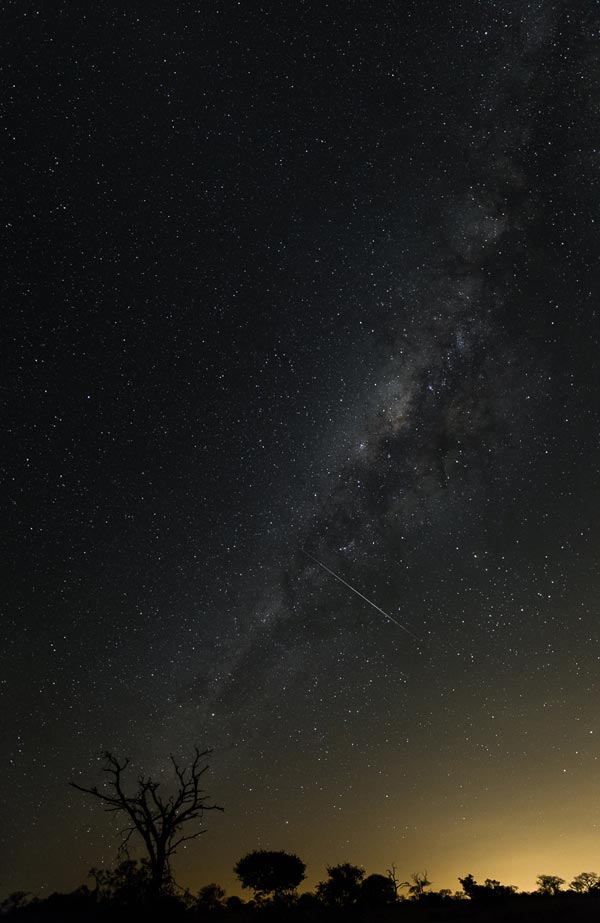 It took a total of 8 photos to create this image and once they had been downloaded onto the computer I edited them in Lightroom, exported them as a 16-bit TIFF and then used Photoshop to merge the images. In order to do this in Photoshop, I went into File>Automate>Photomerge and when the dialogue box popped up I then chose to realign images. I browsed and selected the images that I wished to merge. The program did the rest. The last part is using the “rectangular Marquee tool” to select the crop you would like and go to edit>copy merged. Now you will need to create a new picture by going to file>new and then paste your cropped image onto the new canvas.