White Rhino, once a really threatened species, have fortunately gone from the brink of extinction to having re-established fairly stable numbers throughout South Africa.

They were, and in some parts of Africa still are, hunted for their horns, (which are actually just composed of keratin, the same protein which makes up our fingernails and hair.) 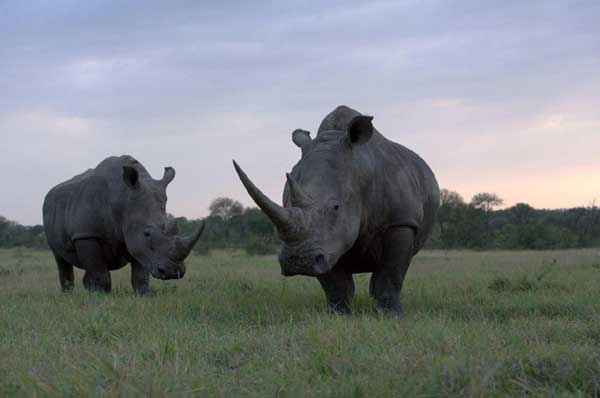 I wanted to get a photo where a rhino showed off its impressive size and shape.

With almost all wildlife photography, the lower that you can get to your subject, the better. Rhino have really poor eyesight and this was to my advantage. Dressed in dark clothing I carefully climbed off the Land Rover, moving slowly and making sure I made as little noise as possible. Although they may not see well, rhinos have very good hearing! I propped myself up next to the vehicle wheel and then just sat quietly, waiting for them to move a little closer.

Being low to the ground gave me a much better angle and the rhino looked almost larger than life. I used my 70 – 200mm f2.8 lens and a 1/1250 shutter speed as I was hand-holding the camera. I had to push the camera by + 1/3 as the rhino pair was a dark subject against the brighter sky and I would have lost detail on their features had I not done so.

The result is this marvelous portrait.