The rhino is a truly prehistoric looking animal. When you see your first rhino you just can’t get over its size, and the way that it moves makes it really look like a tank.

This is an animal that is facing a very uncertain future. In the past year untold numbers of rhino have been poached from many reserves and it might not be long before we no longer see these amazing creatures in several parts of Africa.

Fortunately at Sabi Sabi we have healthy populations of rhino and we take great steps to ensure that they are secure and closely guarded. Rhino are not easy subjects to photograph. While travelling about on this particular afternoon I was fortunate to see 3 separate crashes of rhino. The ones I was photographing started moving off towards some nearby water. I followed closely behind hoping that they would go and roll around in the mud and that I would get something different from the usual to photograph. 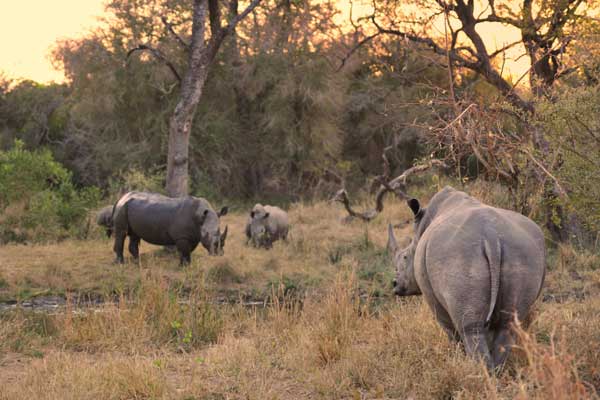 When they arrived at the waterhole there was already another crash of rhino enjoying the cool mud. In both crashes there where territorial males so I expected some action. The sun was setting and I saw the potential for interesting activity. When one of the bulls stopped and faced off with the other I put my camera with the 70-200mm 2.8 lens onto my Wimberly head which is great to use with telephoto lenses, and decided on the following settings.

I needed enough depth of field to get the rhino just in front of me into focus but low enough so that the background and other rhino were out of focus. When doing this one gets a sense of depth. I used F3.2 and a speed of 1/500 of a second. I knew that because these animals are naturally very dark, and because the lower part of the shot was also dark, the camera would compensate. Unfortunately the sky would therefore be overexposed. The only way to sort this out if I had the time, would be to put a dark graduated neutral density filter on. Not having the time to set this all up, I nevertheless just clicked away. Although the sky is a little light it lends warmth and still creates a wonderful mood.