The magical thing about these types of photos is that it’s all about playing. By changing the smallest things you can see the biggest results.

For this type of picture it is imperative that you have a tripod. Without one it becomes very difficult as you need absolutely no movement for the 30 seconds your camera shutter will be open. The reason I chose a shutter speed of 30 seconds is because the idea of this image is to expose for the stars. They are the natural light we are working with for this photograph.

My ISO was set quite high as it was still early on in the night and the stars were not at full brightness yet. Later on in the night I could have lowered my ISO dramatically to around 800 if the conditions were good enough. However in this case at f/2.8 and shutter of 30 seconds, ISO 3200 was required to get the stars to really punch through. 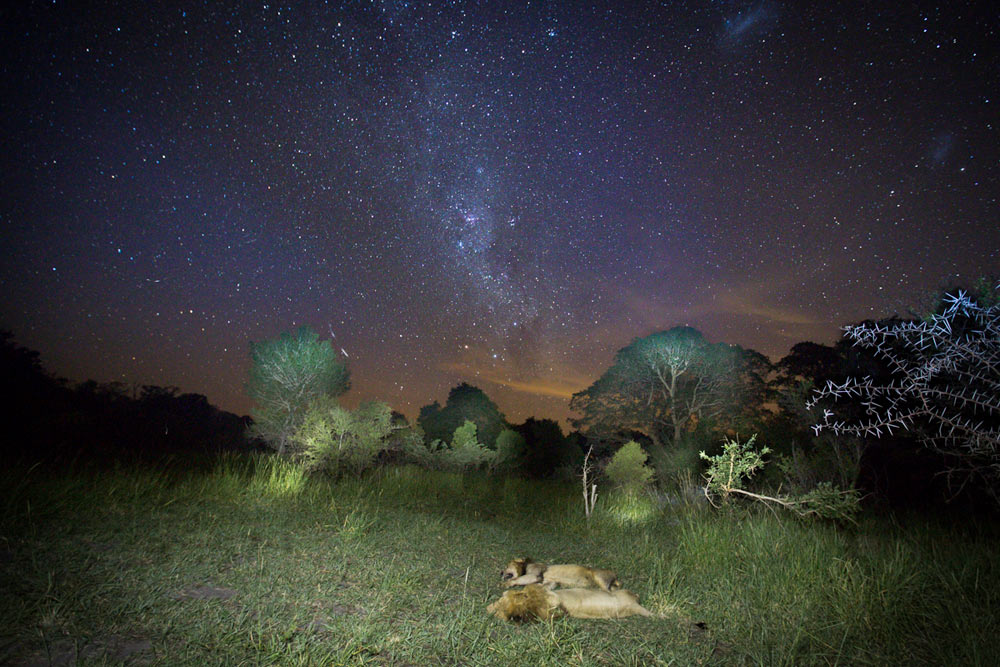 Now if you are still with me at this point you will have noticed you have a beautiful looking sky and a horribly black foreground with no lions to be seen! This is where your flashlight comes in. I was using an LED lenser flashlight, which has a focusable beam (important). You want your beam to be able to focus so you can get an even amount of light on your foreground. The simple rule with light is that every time it doubles its distance, it halves its intensity. This is why a flashlight is used for the foreground in this image rather than a speed light.

**NB** If you took this image with a speedlight you would in all likelihood get bright lions and still black trees, as there is a huge distance between the two – around 30 meters. Your camera would see that you are focusing on the lions and would expose for that, ignoring the trees in the background – as it is impossible for it to light both evenly.

This is where the focusable flashlight comes in. You can make a bright narrow beam to light up the background and a wide, dimmer beam to light the lions closer to you (spending more time on the background further away as that area needs more light). This is where the fun comes in as you literally “paint” with light on the areas you want to see in the picture. Anything your beam doesn’t touch will remain black.

The reason the lions are relatively sharp in this image, even though it is 30 seconds long, is that they were only being exposed to the camera’s sensor at the times I was shining my light at them (roughly 2 seconds in this image). So as long as they don’t roll over, stand up or breathe too much in these 2 seconds, they will be sharp enough for a decent picture.

Bring your creativity to life.