The more I get out into the African bush the more I learn about animal behavior, and, more importantly, how to get the best out of the bushveld light. The new generation Nikon cameras have opened up entirely new opportunities. In years gone by I would have been well on my way home as soon as the sun dipped below the horizon. No more.

Look at this photo of yet another beautiful male leopard. I will show what can be done with really low light. This leopard had done little other than sleep all afternoon. The light was poor so I was not thinking about photography and just spent time enjoying the scene. But like most leopards, once the sun set and it started to get dark the he woke up and started to move. I followed and soon the leopard climbed a big termite mound. He was clearly hunting and could hear something inside the mound. 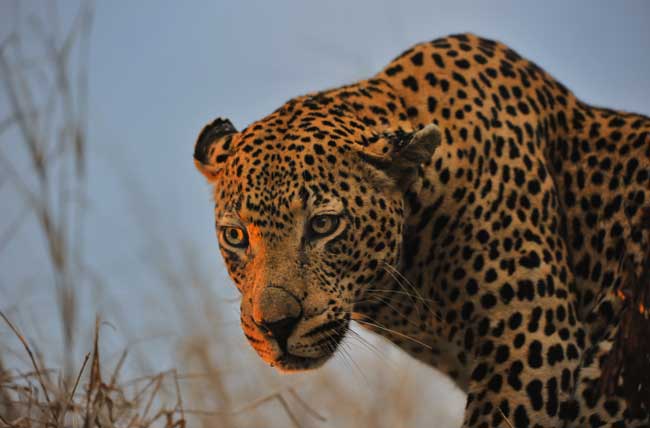 I positioned myself where I thought he might move next and got my camera ready. He did not move for a long time so I managed to get things really well set up. Using my 200-400 F4 lens, I pushed my ISO up to 2000 and set the camera on F4 and 1/400. This was a little slower than I would prefer but the light was all but gone.

While I was waiting, another Land Rover joined me at the sighting. They had a better view of the leopard than I, but I was sure he would move soon. I asked the other ranger to please shine his spotlight on the leopard if he did start to move, and I didn’t have to wait long. As he descended the termite mound he paused briefly to listen, obviously to what he could hear moving inside. As he stopped I put my finger down and took a burst of 11 pictures, much to the amusement of the guests. But on reviewing my screen I saw fantastic photographs, with the spotlight throwing just enough light on the leopard to create a really dramatic left eye. As well, the blue sky was perfectly exposed, really making this a wonderful image.