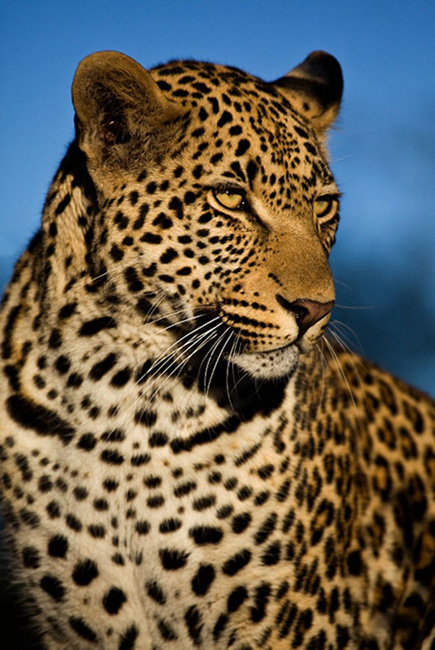 Achieving a great portrait of an animal sounds a lot easier than it actually is. Unfortunately, when working with wild animals as models, one is unable to manipulate ones subjects or to position them in the way one desires. When it comes to portraiture the background is a key element. A shallow depth of field blurs out any background distractions and puts all the attention on the subject. With this leopard portrait, the young male leopard was sitting on top of a termite mound which allowed me to capture the beautiful blue sky in the background, giving it perfect contrast between the golden colors of the leopard in the beautiful early morning light.

I used my Canon 100-400mm lens to get a nice tight crop, a little too tight for some. Photographing in aperture priority, I set my aperture to f5.6, giving me a shutter speed of 1/2500th of a second. I captured this picture as the leopard’s attention was drawn away from me, losing the eye contact. Usually eye contact is an important aspect in portraiture, but in this case, the stare into the distance portrays the animal better. It creates a feeling of candidness and also a little intrigue and interest as the viewer of the photograph wonders what the creature is looking at. It also portrays, in this case, the shy nature of this illusive animal. A little more space to the right of the frame would have been desirable to give the leopard space to look into, but for me this still works great!