Searching for the right spot for sundowner drinks is an integral part of the safari experience and this afternoon we were in the right place at the right time!

We were in time to see the sun go down, the colors change and watch the full moon rise. But wait, isn’t it impossible for a full moon to rise with a sunset? First of all the moon will rise in the east and secondly the sun and moon can’t be on the same side of the sky for it to be a full moon!

Two pictures were used to create this image: a picture of the actual sunset; and a picture of a full moon taken on another occasion. 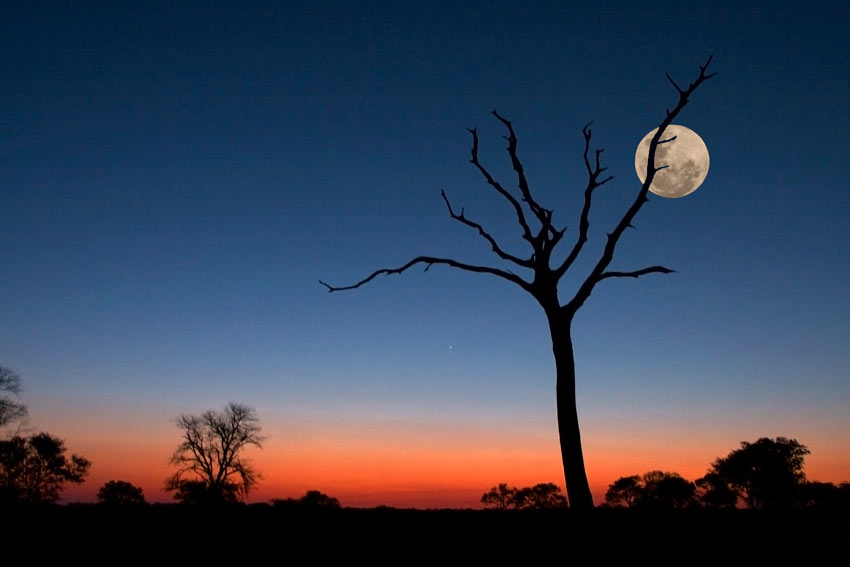 The sunset picture was taken using a 24-105mm 4.0 L lens with the camera on aperture setting. I under-exposed to get the true colors back into the picture. I set an f-stop of 5.6 and the shutter speed down to 1/15 with the ISO set to 400. No tripod was used, but I used a tree for extra stability.

The picture of the moon was taken with a 100-400mm 5.6 L lens using the aperture setting and again underexposing the picture to get the right exposure time. My f-stop was 5.6 with a shutter speed of 1/40 and with the ISO set to 400. No tripod was used so the shutter speed had to be quick enough to handhold the camera.

Both pictures were opened in Photoshop CS5. The quick selection tool was used to cut out the branch I wanted to have the moon behind and saved as an extra layer by: Layer via copy. In your work space it then forms Layer 1 (on top of your background).

It is important to make sure that Layer 1 is first in your work space underneath Layer 2and on the bottom the background. If Layer 2 comes first, the moon will fall over your branch and not underneath!

Now the moon is dragged to the right spot behind the branch and the image is saved.