Three decades ago, at the inception of the Sabi Sabi Game Reserve, a trio of enthusiastic young applicants from nearby villages was chosen to join the initial Sabi Sabi workforce. It was impossible to predict how long they would remain part of the team, but the three were talented and hardworking – and at each 10 year award ceremony, Rob Lubisi, Frank Sibuye and Rose Thibi, took their places to be thanked and acknowledged. Thirty years on, these same remarkable people have been recognized for their amazing loyalty and contribution to the Sabi Sabi family.

When Rob Lubisi joined Sabi Sabi in 1980, he was employed as a gardener, but, being ambitious, he had his eyes on opportunity. He progressed after a while, moving into the hospitality side of the business and becoming a waiter. Then, after some training, he was promoted to barman, a position he held for sixteen years. But Rob didn’t stop there. He further developed his skills, acquired a special interest in wine, and was finally appointed food and beverage manager at Bush Lodge – a post he still holds today. In reminiscing about his growth and training over the years, Rob says that one of the highlights was attending a series of wonderful wine courses at various vineyards in Cape Town, Stellenbosch and Paarl – and then coming back to Sabi Sabi to pass on his new skills to the various lodge managers and waiters. He attributes his long service to the family atmosphere at Sabi Sabi and loves the fact that there is always something new to keep him interested and involved. “This is a beautiful place to work and the people are amazing. There have been huge changes to Bush Lodge over the last few years and I have really enjoyed being part of the upgrading and refurbishment.” he says. “As I am talking to you on the phone I am watching an elephant with only one tusk eating from the Marula tree in front of the lodge. You can’t beat that!” Rob has a son, Trevor, who is following in his Father’s footsteps, working as a barman at Little Bush Camp. 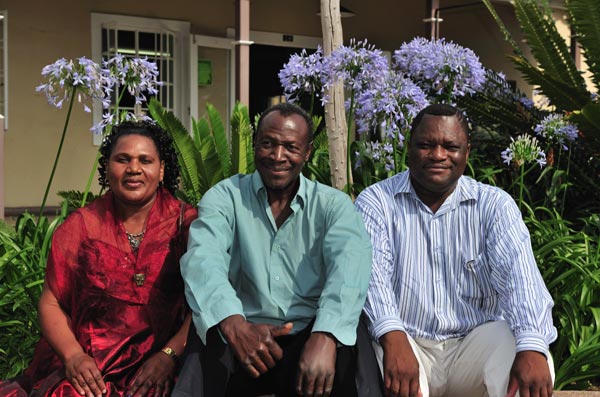 Frank Sibuye, the talented lodge maintenance “go-to” man, talks about the many changes both at Sabi Sabi and in South Africa during his thirty year tenure with the company. With his quietly-spoken demeanor and imposing bearing, Frank was a respected Induna (advisor) in his village. As a community leader he was thrilled to be part of South Africa’s peaceful transition from the apartheid era into a miracle rainbow nation.

Many years of on the job experience, further enhanced by working alongside talented builders and wood-workers during the lodge upgrades, have allowed Frank to develop his keen interest in furniture-making and restoration – an invaluable skill and rewarding hobby. He, too, has had family members employed at Sabi Sabi over the years, including a brother, Frances, who was previously employed as a ranger.

The third of the long service trio, Rose Thibi, perhaps knows Bush Lodge best of all. Rose is one of the cornerstones of the housekeeping department, having worked in all of the quiet ‘back of house’ departments – the unsung heroes of the beautiful accommodation. She understands how important is the attention to detail which keeps this 5-Star lodge running like clockwork. However, knowing the various operational workings of Bush Lodge so well, Rose is also often called upon to assist in many other areas of the lodge. She has proudly watched all the changes at Bush Lodge, and loves being part of the vital housekeeping department.

It is very rare to find people who commit so many years and so much dedication to one employer, a point that was highlighted at the thirty year awards ceremony. In addition to the formalities and ensuing celebrations, Sabi Sabi Directors Jacqui and Hilton Loon treated Rose, Frank and Rob to a private lunch in Hazyview to personally thank them for their ongoing loyalty and for their contribution to the unique spirit of warmth and hospitality for which the lodges are so famous.