We asked one of our rangers, Ally Ross, to give us an update on the Lions at Sabi Sabi, and she shared this fascinating story with us.

On my first safari at Sabi Sabi, I distinctly remember my excitement as we pulled up alongside a small group of lions. The majority were wide-eyed, young and somewhat timid in nature, and I remember we discussed the splendour of this once grand pride. Shortly before my arrival at Sabi Sabi as a guide, there was an intense altercation between the then large Southern Pride (comprising mostly of females, sub-adults and cubs), and two nomadic lions, known as the Avoca lions, who were surveying the outskirts of their territory. These two dominant males met up with the Southern Pride in the midst of a buffalo hunt, and once the dust had settled, the catastrophic remains lay strewn across the plains.  At one stage this pride was known to have 22 members. 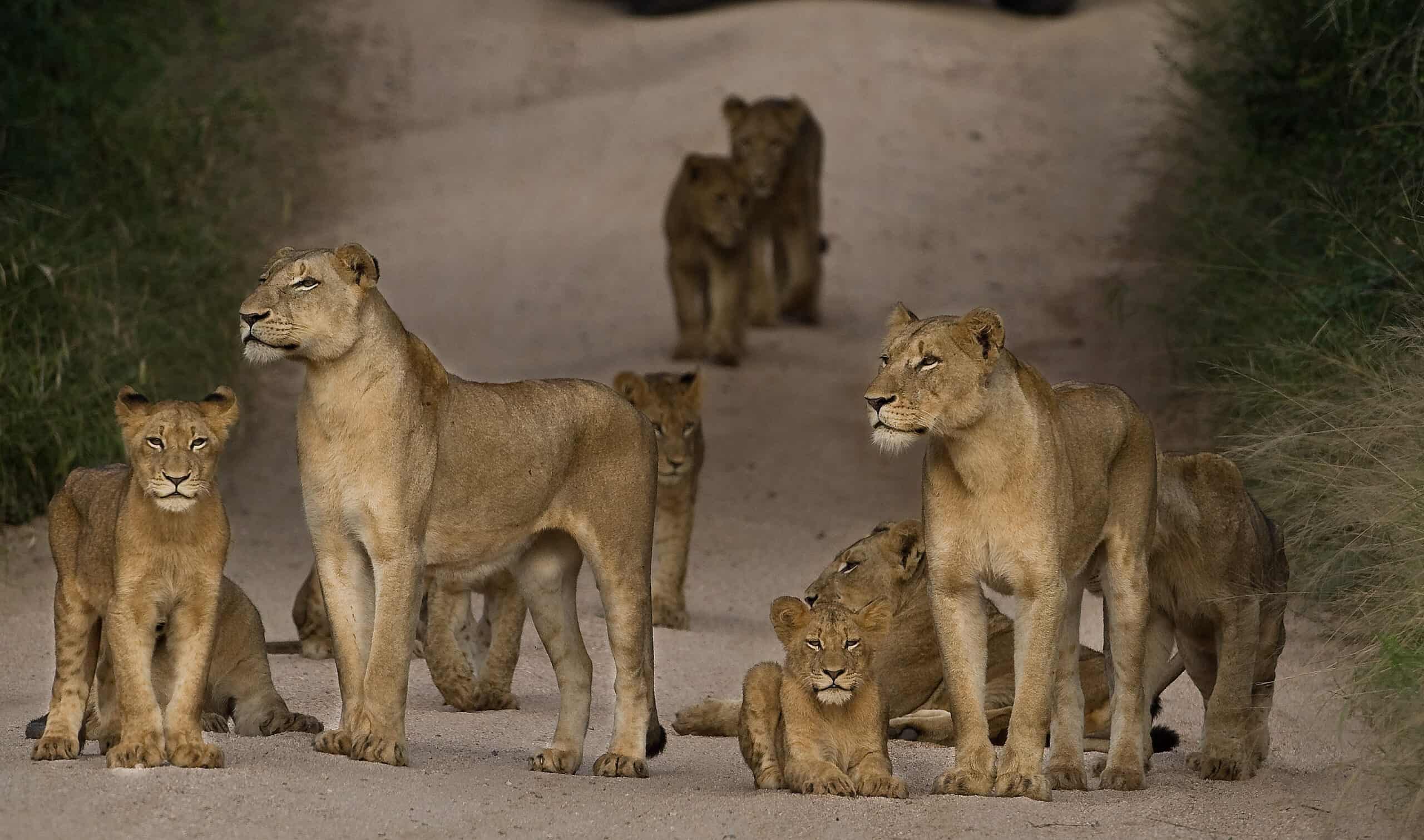 The females, as their matriarchal role requires, defended their young as much as they could, without the protection of a male coalition. 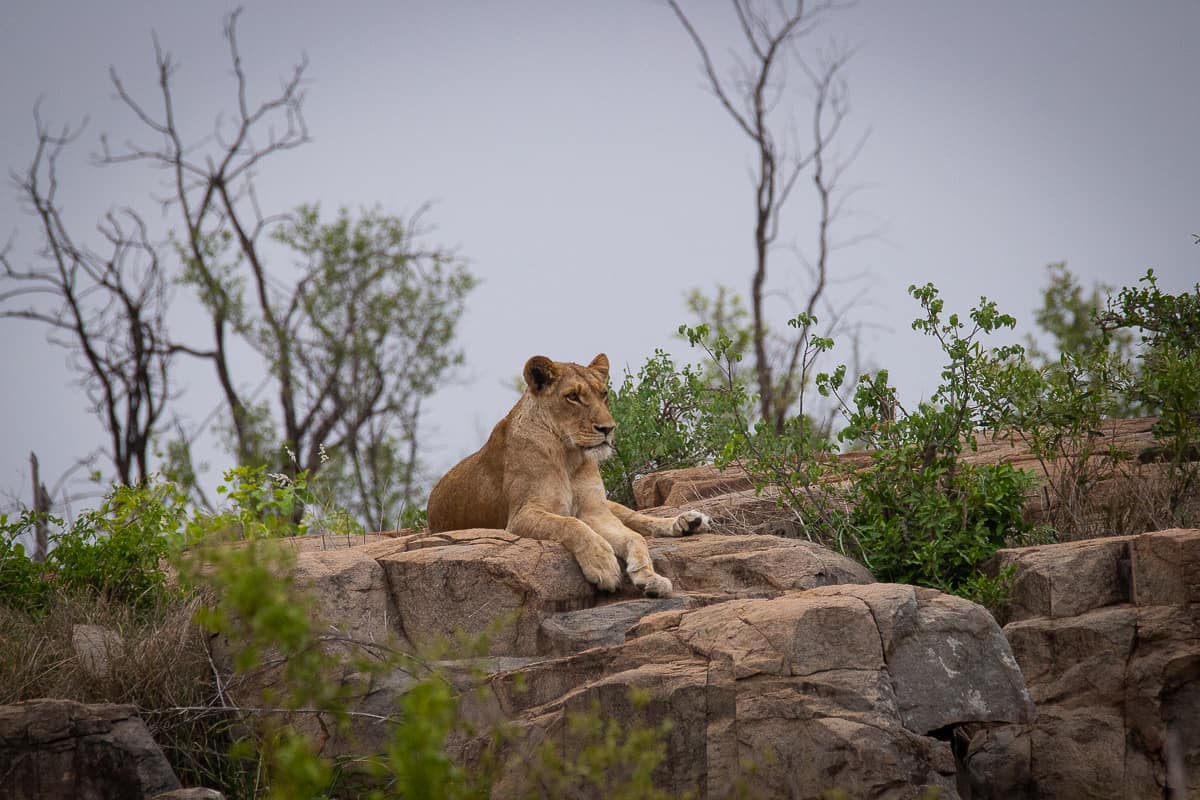 For many months we watched as the remaining five clung to life. Soon, five became four, with one of the young males disappearing, and we could only hope for a better outcome for the survivors. One female stood out above the rest. Her tenacity and power captured our attention as she played the role of protector and provider, with her mother continuously stepping up alongside her – a splendid teacher indeed. It seemed they had found a way to survive this tragic but natural process in the wild.

A Welcome Return
One morning, commotion erupted over the radio.  A few of our Rangers spotted four large males roaming the open plains in the central north of the reserve. We made our way to where they were – these boys were a sight for sore eyes. 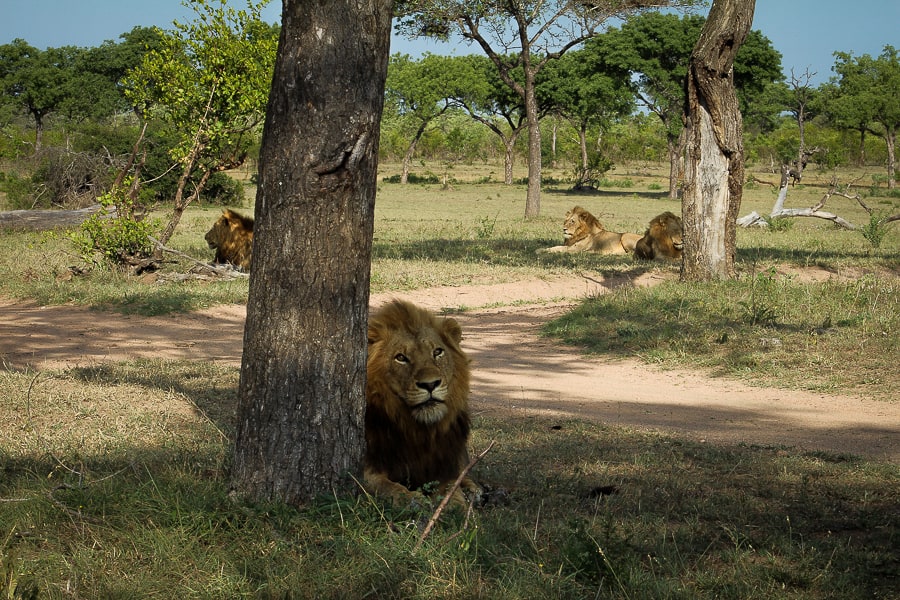 The N’waswishaka males, as they became known, had battle-scarred faces that told the story of their success in becoming a powerful coalition. 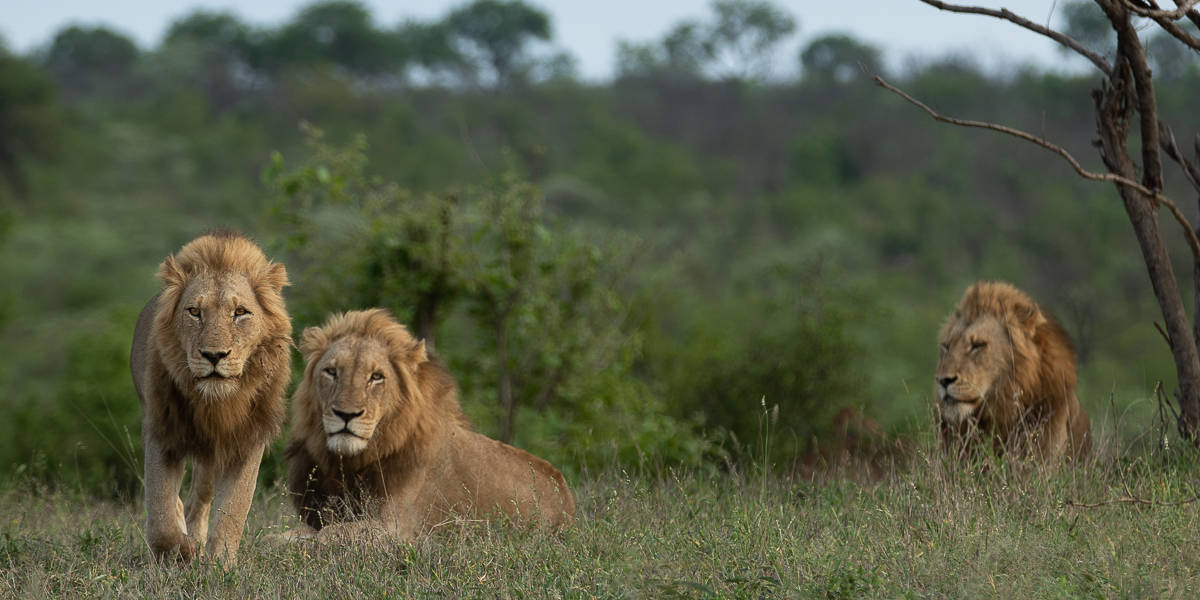 Meanwhile, with a big portion of land now available for takeover due to the decline of the Southern Pride, we noticed a large amount of movement in the northern sector of our reserve. One pride in particular, the Mhangeni’s, moved into the area.  This turned out to be devastating for the remaining Southern Pride lions, as another huge altercation left the older female battered and bruised.

For some time after this, we saw only the older Southern Pride female and her young daughter, and it was during lockdown that we witnessed a massive deterioration in the older female’s condition. Her inability to travel long distances took its toll on the pair, but the young female continued to provide and care for her matriarch.

A Dominant Return
For some time, lion dynamics in that area were a little low, and we had almost accepted that it would be a while before decent lion activity returned. Then, one morning we saw vultures circling around Selati Camp, and in the midst of lockdown, it took some time to realise that something magnificent might be happening right before us. 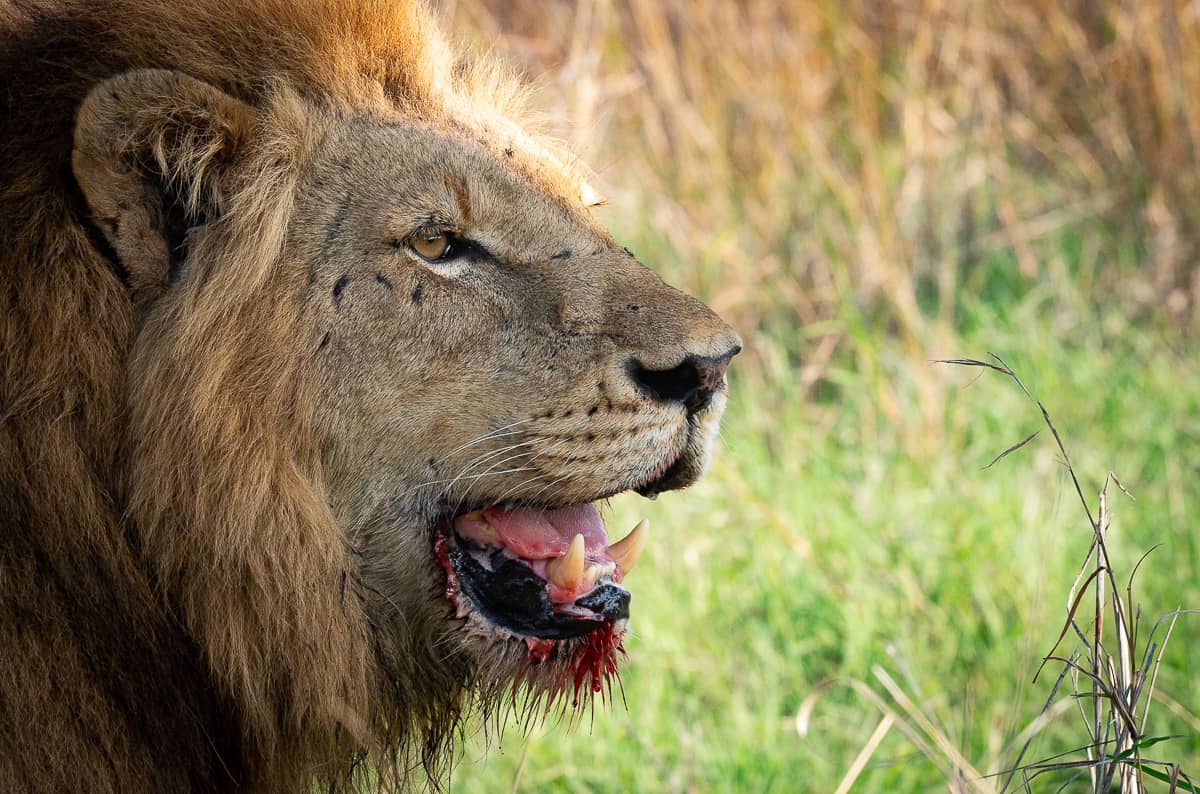 The N’waswishaka males had returned! Blood-stained coats, full bellies and salivating mouths made it clear that these boys were here to stay. They had brought down a rather large buffalo and concealed it under low-lying vegetation. We spent the entire afternoon marvelling at the sheer size and success of these males, as the stench of their prize lingered through the open area. 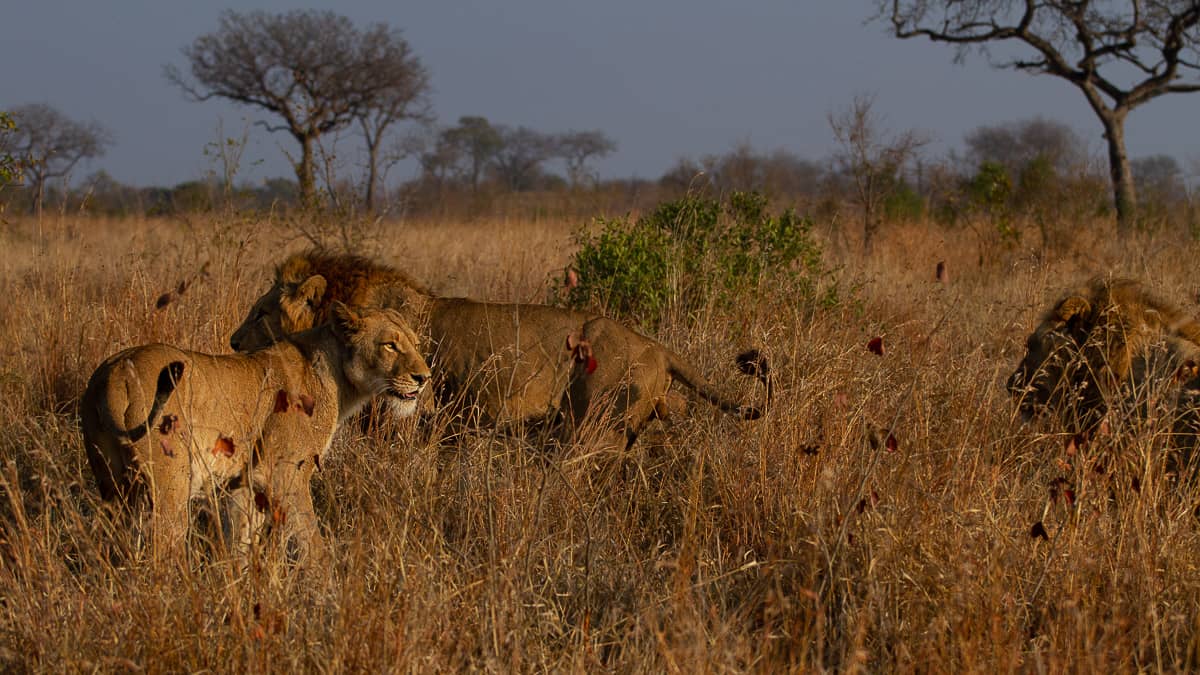 Not long after the excitement of the males’ return, the death of the older Southern Pride female happened. It was a sad moment for those who had witnessed her raise young cubs and lead a pride with her sisters. Her daughter, around four years at the time, spent a short while paying her respects, before leaving the lifeless body to be returned to the soils of Sabi Sabi. This young female then lived alone for quite some time, providing for herself, and becoming stronger by the day. She actually fared better than many of us had expected, until one day we came across a joyous surprise. She had met up with the N’waswishaka males! 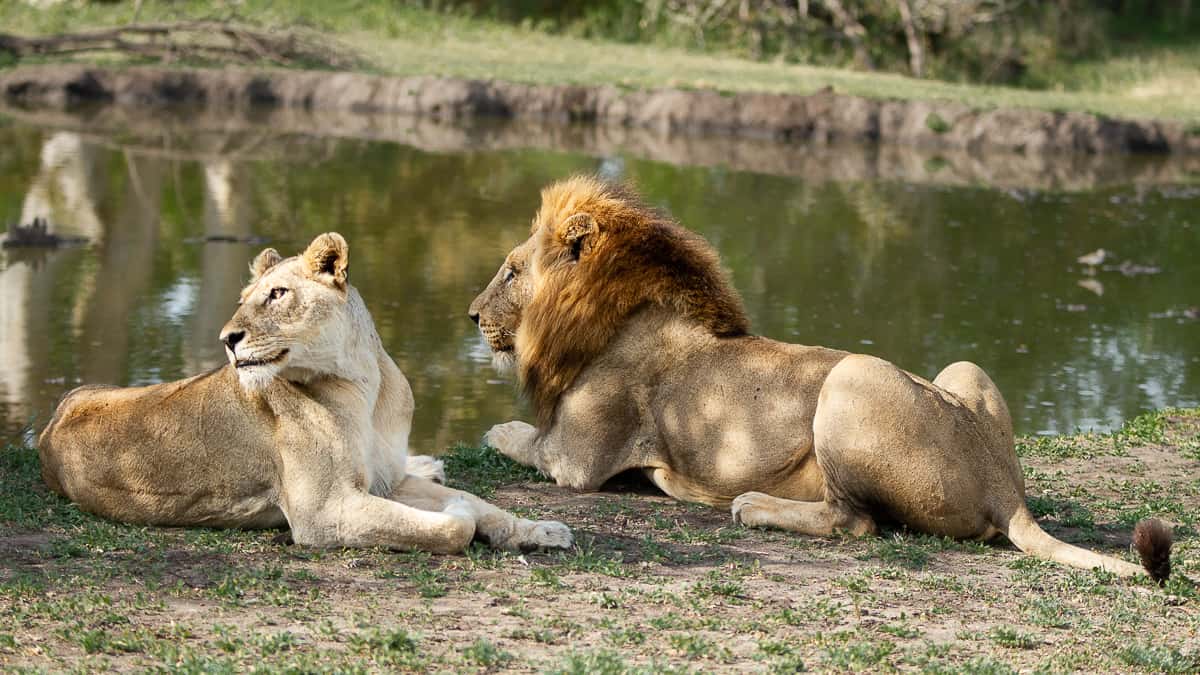 Her attempt at singling out these males for herself didn’t go without some competition, as we began seeing females from the Styx Pride infiltrate into the southern sector of our reserve to fight for mating rights. The presence of the males was amazing to witness, as their takeover was powerful and their vocalisation travelling far and wide to grab the attention of all potential intruders. It was a warning best heeded. 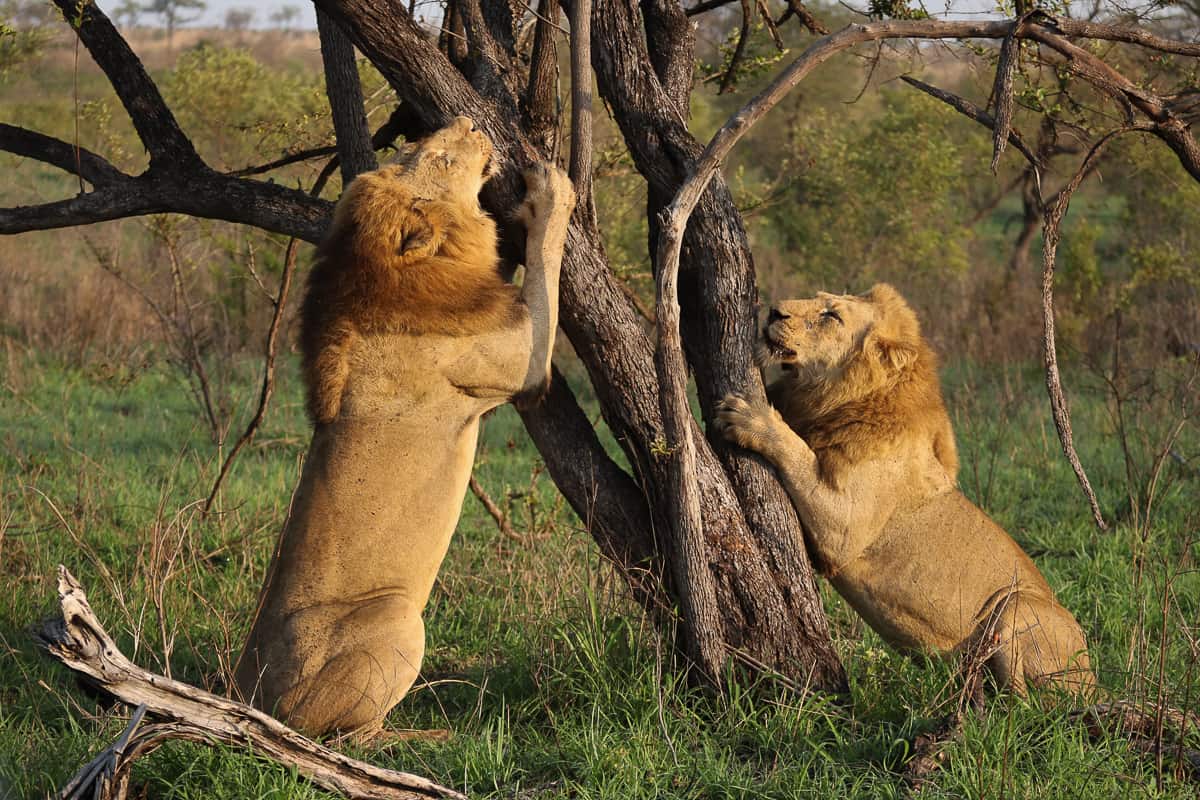 The Greatest Gift
In September 2020, having not seen the lone surviving Southern Pride female for some time, our concern was growing, until we spotted her again.  Concealed alongside her belly lay the sweetest gifts Sabi Sabi could bare… The rebirth of the Southern Pride. Tucked away in the rocky outcrops, her offspring were undoubtedly Sabi Sabi’s best kept secret, and she worked tirelessly to provide for and protect her young cubs, concealing and defending them for all she was worth. 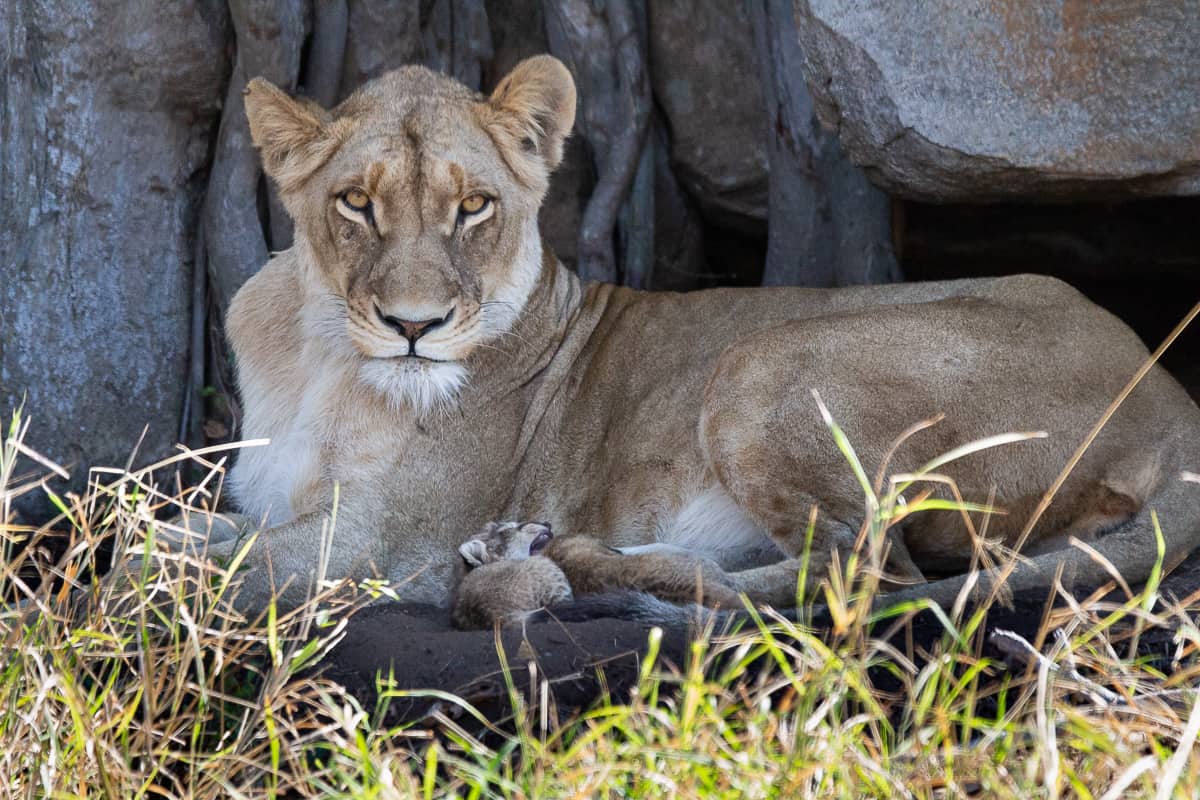 Since then, we have watched the two busy cubs keep up with mom and the males. They have successfully made it through some of the most dangerous early stages of their lives. With the protection and the bond they are forming with the N’waswishaka males, the most dominant being their father, we hope their birth will carry the Southern Pride legacy forward for years to come. 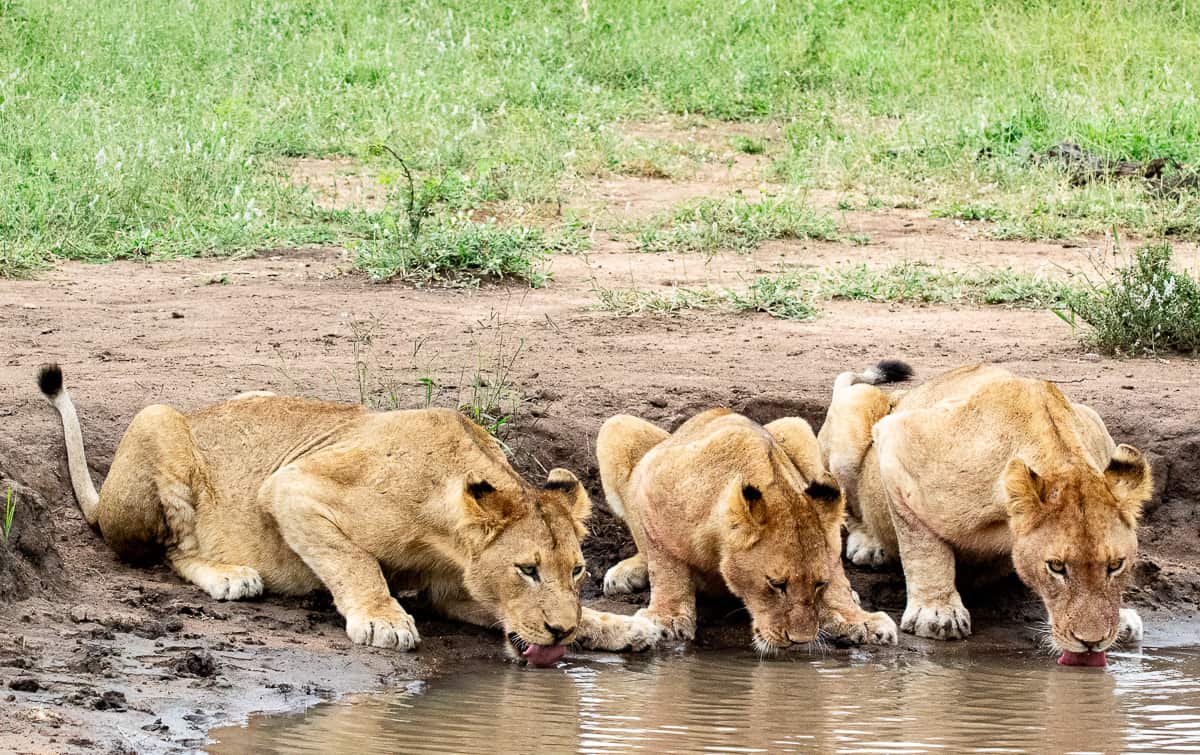 There are of course continual threats facing the Southern Pride female and her youngsters. One such potential threat is the split and movement of the Kambula Pride, which comprises of females and a mixture of sub-adult males and females. These nine individuals have been seen moving into the central parts of our reserve, and this grouping could pose a threat to the Southern Pride female, should they go in search of new land further west.

Mothers Know Best…
However, a more imminent threat is that one of the Styx females has been seen mating with one of the N’waswishaka males. Since seeing what looks to be a heavy belly – with subsequent reports of cubs being born – she is causing friction in the northern sector of the reserve. Not too long ago the Southern Pride female ventured into the central northern sector of the reserve, an area she hasn’t been to since the passing of her mother. She successfully chased and killed a large male kudu by herself. With a bounty to share, she sauntered off to fetch her cubs, but her return was met with a snarling Styx female, trying to claim what was not rightfully hers. A battle took place over the kill, with the two cubs right in the middle of it all. However, surprisingly the Southern Pride female eventually allowed the Styx female to feed for a short period before leaving. Soon after she and her cubs moved in to feed. It was as though there was a new mutual respect between the two mothers, and their similar needs. 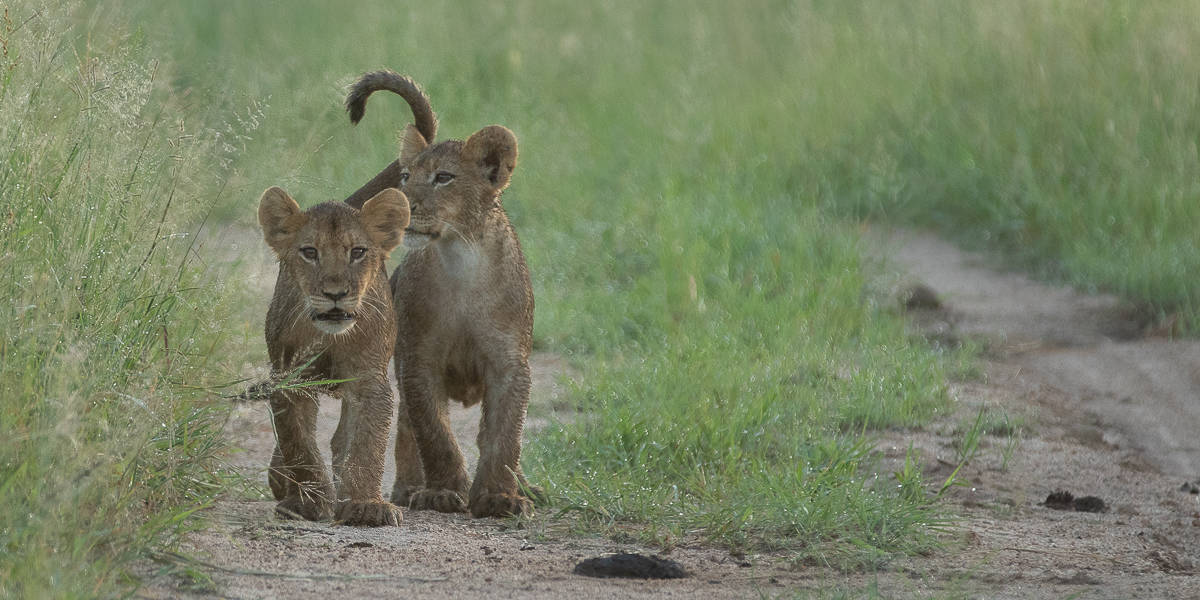 We are hopeful that the Southern Pride lioness will rear her two cubs to adulthood and that they remain under the protection of the four strong males.