In the 30 years since its inception, Sabi Sabi has built, changed, innovated, and become recognized as one of the leading destinations in the world. Each of its four distinctly individual 5 star lodges has been artfully designed to echo different times and eras, their décor and ambience capturing the spirits of Yesterday, Today and Tomorrow – and visitors are now spoiled for choice!

Selati Camp is the lodge of “Yesterday”, steeped in the history and romanticism of the Old Transvaal. Bush Camp and its smaller counterpart, Little Bush Camp, are the lodges of “Today”, eclectic, colourful and vibrantly African. “Tomorrow” has been brilliantly captured in the newly refurbished Earth Lodge, its glamorous edge reflecting all the mineral wealth that this country has to offer. 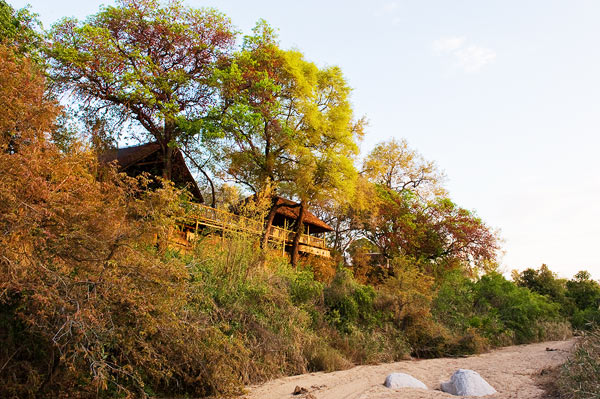 There is a rich history in the Sabi Sabi area, with legends of fearless hunters, marauding man-eating lions, hidden gold and grand old steam trains. The 19th century Selati Railway Line which carried ore from the gold rush towns in the Transvaal highveld to the Lourenco Marques harbor in Mozambique is surrounded by folklore and tales. It was called the “man a mile” line, a testament to the number of labourers who died during its construction. There were several stops along the route where passengers would climb trees to avoid being eaten by lions while waiting for the trains – with strategically placed ladders an indicator for the drivers as to where they were hiding.

The disused old rail-bed can still be seen in the Eastern section of Sabi Sabi close to Selati Camp, a stunningly beautiful, intimate lodge whose character reverberates with memories of the steam train era. Nestled in the shade of the giant indigenous acacia trees which hug the Msuthlu River, the ambiance at Selati is luxuriously “Out of Africa” and unashamedly romantic. Beautiful gardens lead to the 8 detached suites, each of which is identified by nameplates of the stations along the train route. With four poster beds covered in sumptuous linens, authentic antiques, exquisite furnishings and fascinating memorabilia it is almost tempting to just luxuriate indoors and soak up the atmosphere. But outside the bushveld awaits!! 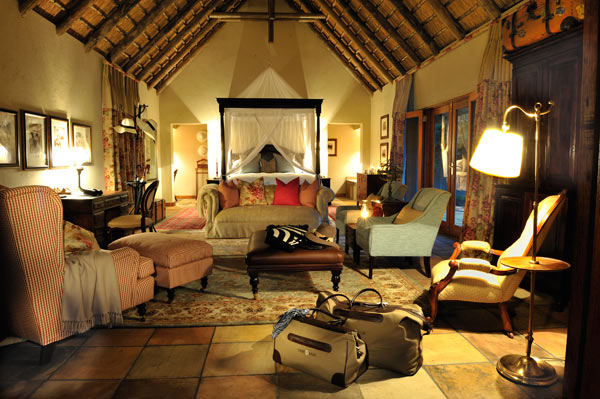 The Ivory Presidential Suite was completely rebuilt after being destroyed by a fire in 2010. Determined to recreate its original glory, the designers scoured the country to find replacement antiques, and they were indeed successful. The result is extraordinary. Priceless carved wooden dressers, tables and upholstered couches sit atop the huge Persian rugs which adorn the floors – even in the enormous bathroom, which also features a gorgeous chaise lounge. Sliding glass doors lead to a private plunge pool and enclosed garden, while the patio overlooking the pristine bushveld invites relaxation. The soul of yesteryear remains, but the luxury is undoubtedly the best of what’s available today.

The historic theme extends into the lounge – a veritable railway museum, complete with uniquely roofed indoor bar area – a charming tribute to the pioneers of the gold rush towns. Even the Farmhouse Kitchen, site of many a mouthwatering dinner, evokes the spirit of a calmer, gentler time. 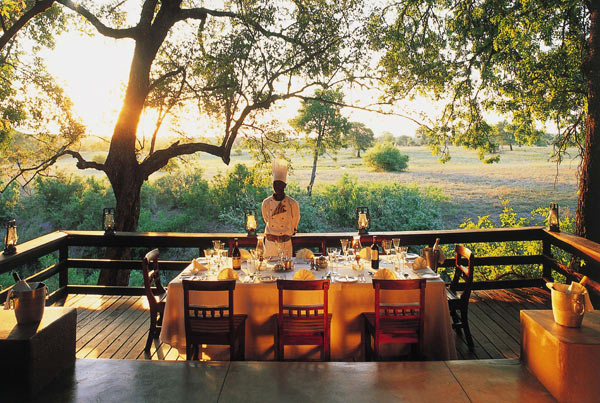 The railway is now nothing more than a memory, its name immortalized at Selati Camp. But the bushveld is still very much alive, with big game prowling the untouched wilderness. Instead of climbing trees to avoid predators, travellers now board Land Rovers to seek them out. Instead of hunting with rifles, the only shots are those taken by clicking cameras as the rangers discover the myriad animals and birds which inhabit the Sabi Sabi Reserve.

And, while sitting around the pool or quietly on the viewing decks watching animals drinking from the waterhole and grazing off the land as they have done for centuries, one can almost hear the whispering from the past. This is the spirit of Selati Camp, Sabi Sabi’s tribute to the Africa of Yesterday.