There are several prides of lions which utilise the Sabi Sabi Reserve as part of their territory, prides with which the rangers have become very familiar. For decades the triumphs and failures of these prides have been studied and documented. In a previous newsletter we discussed ‘The Southern Pride’, a very successful pride which has dominated our reserve for several years. At that stage, about three years ago, the pride numbered five adult females, four of which were strong and healthy and one that was so emaciated and sickly that she appeared to be on her last legs. No-one was sure what had happened to her, but it was thought that her hip had been severely damaged from being kicked by a zebra. 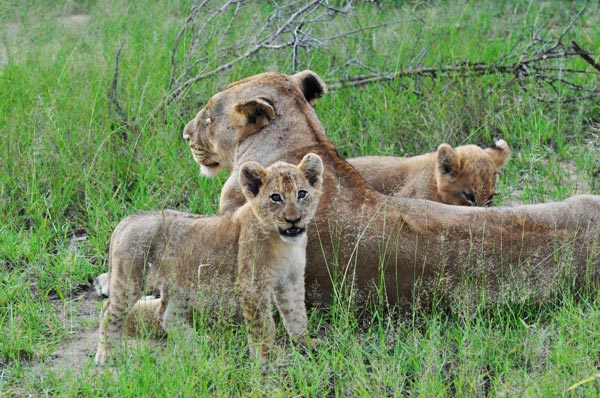 Her injury, though serious, did not deter her from mating with the two dominant males in the area. She and the other females all produced healthy cubs at about the same time. Although her damaged hindquarter prevented her from hunting with the rest of the pride, this determined lioness still played an extremely important and positive role; she became the guardian of all the vulnerable young cubs, staying with them and protecting them from prowling predators. Several times Sabi Sabi guests and rangers witnessed her chasing off hyenas and leopards intent on harming the helpless lion cubs. Of the 12 cubs born at that time, nine survived to adulthood and are now forming their own pride.

The injured lioness became stronger, craftier, and even more valuable to her pride. One of the dominant males died, leaving the other vulnerable to attack from opportunistic newcomers seeking territory. On quite a few occasions when these interlopers challenged the remaining male lion, the lioness went into false oestrus – distracting them – which gave the pride time to get away. Her actions saved the youngsters, as, if a new dominant male had taken over the territory he would have killed the cubs. 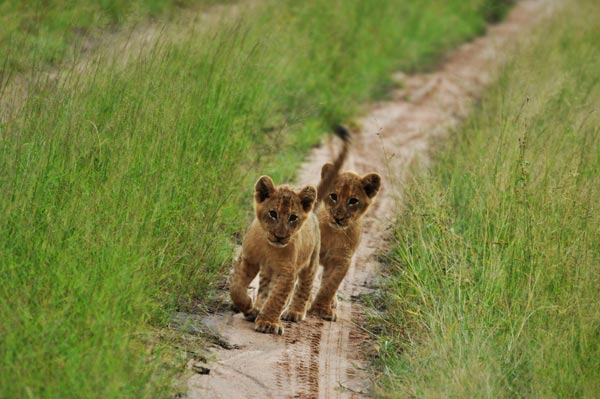 Towards the end of last year, this amazing lioness together with three others, joined three young males and established a new pride in the heart of the Sabi Sabi bushveld. Just two months ago, tracks in and out of a drainage line indicated that she had once again given birth; but it was several more weeks before trackers and rangers saw the new litter for the first time – together with the rest of a pride at a wildebeest kill. Since then these cubs have produced some wonderful memories and photo opportunities for everyone who has had the privilege of seeing them, guests and guides alike. They are growing daily and are typically mischievous, stalking, jumping and playing and – being male – trying to outdo each other at every turn. Like their mother, they are totally relaxed around Land Rovers, and have been seen at a number of kills together with the rest of the pride. Although they are still suckling, it is obvious that they are becoming more and more interested in meat.

While there is evidence that the other females have also given birth, their cubs have been kept out of sight so far; leaving the once injured mother the focus of attention. Against all odds she has successfully raised several litters to adulthood and independence.