The Kambula Pride has been seen frequently around the reserve and seems they are looking to extend their territory. We have been seeing them for a while now moving deeper into our reserve. The coalition of four N’waswishaka male lions that roam this territory are always moving around to numerous prides found within it, this allows for genetic diversity and too allows for their bloodline to run deeper than ever before. With many different females carrying their young, they most certainly have been successful.

A herd of wildebeest were grazing after dark in an open area, oblivious to the fact that the Styx Pride were watching from a Tamboti thicket. One of the younger subadult females flanked around without the herd noticing. She chased the herd towards the Msuthlu drainage line where they managed to isolate a wildebeest. One of the adult females got hold of the wildebeest and the rest of the pride rushed in. The pride fed through the night just in front of Bush Lodge until the morning when a clan of hyena built up enough numbers to push the pride off.

Two days later, the Styx Pride was successful once again in killing a wildebeest, most of the kill was consumed and almost twenty hyenas and countless vultures kept a close eye on any opportunity for some scraps. Suddenly two male lions came running in sending the Styx Pride, hyena and vultures in all directions. Read all about this sighting in Andries’ blog, “A morning full of surprises”.

With leopard high on our guest’s wishlist we were determined to track and potentially find the Kigelia female, who was spotted the night before.  However, we were unsuccessful as light rain had washed away any fresh tracks. We decided to continue through some drainage lines as these are naturally good areas for leopard.  As we continued driving through open areas and riverbeds alike, stopping and listening for any alarm calls, suddenly we heard a squirrel calling!  Success!!  It was not Kigelia, but rather the young Golonyi female, whose presence has become constant. Her calm nature left our guests in awe, and she rested with ease in close proximity. A beautiful experience for those witnessing their first leopard! 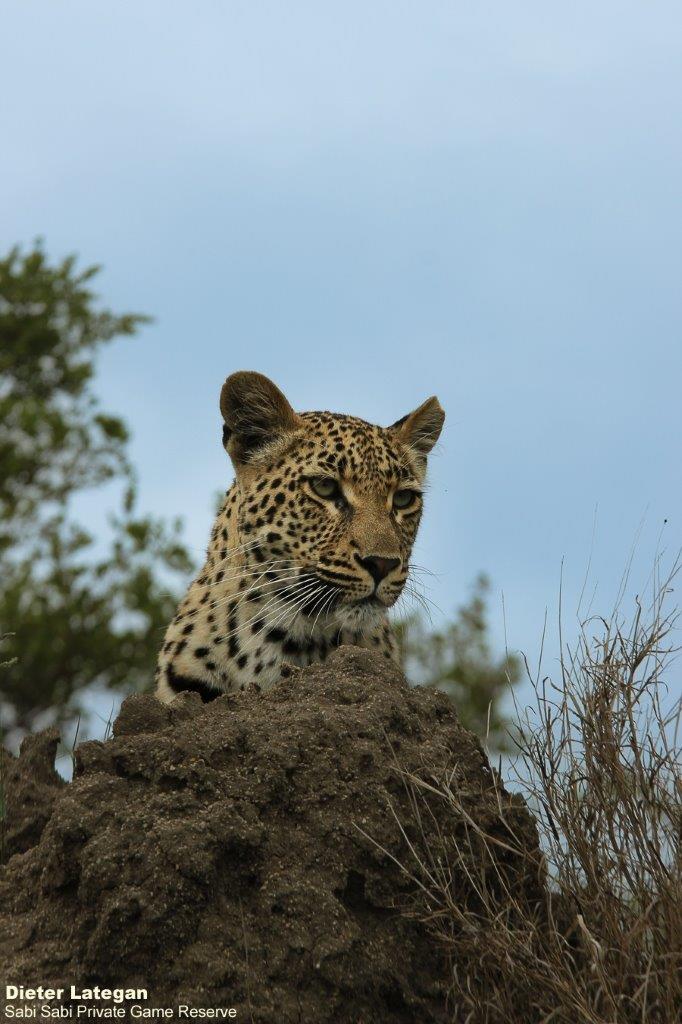 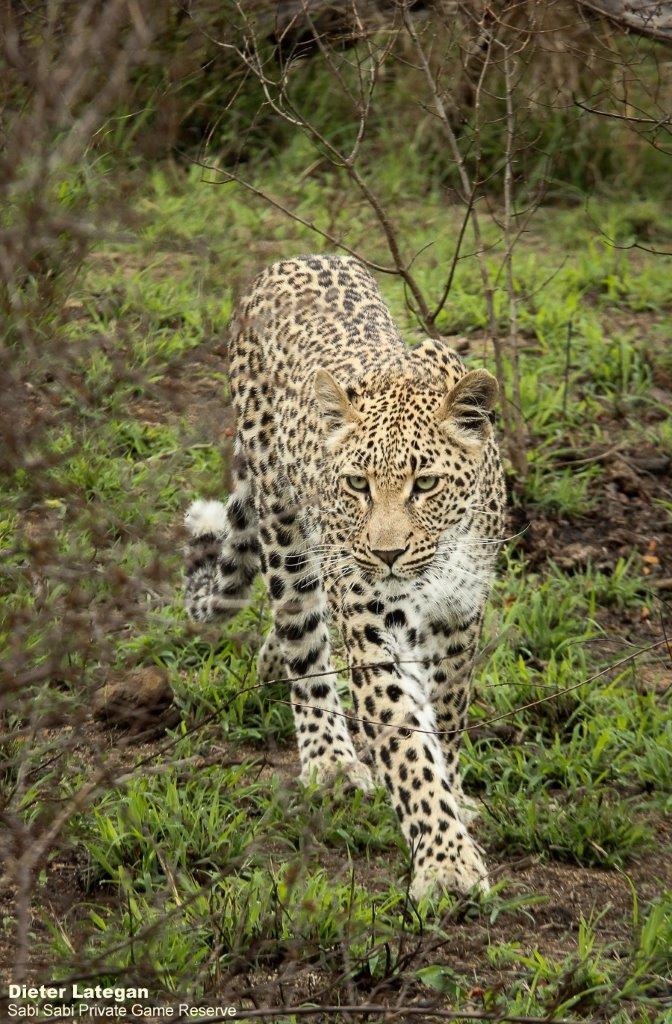 Our sunset drinks stop was cut short when the sawing calls of a male leopard were heard close by. The barks from a troop of baboons roosting in a large Jackalberry tree on the banks of the Msuthlu drainage line were our next clue as to where this leopard could be. We rushed over to find a large herd of impala all staring in one direction, where we would finally find Mawelawela walking through a thicket and marking territory.

The bush constantly provides messages for those willing to stop, listen, take in, and interpret. On this occasion it led us to a large male leopard, going about his daily activities of marking and advertising his territory. 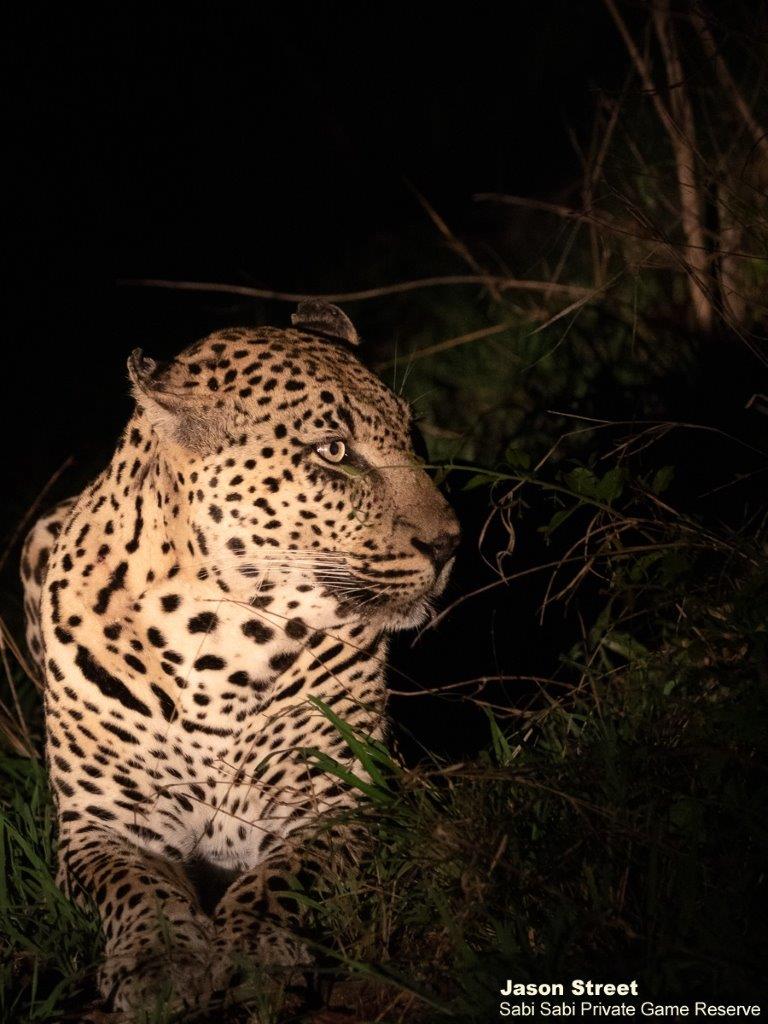 Ntsumi was found giving soft contact calls searching frantically for her cub, who had been found earlier not far from where she was. She took advantage of the freshwater that built up after heavy overnight rains before continuing her search.

Predators often take advantage of heavy rain to hunt as it gives them a distinct advantage over prey. The rain will aid predators to get closer to prey as visibility is reduced, scent is hidden and sounds masked. We presume Ntsumi took advantage of the conditions, made a kill, she was searching for her cub to take him to the kill.

Ntsumi and her cub were found with full bellies. They lay out in the open with eyes locked onto a herd of impala. The ever-opportunistic Ntsumi quickly spotted an impala lamb and wasted no time. Quickly into stalk mode she closed the gap and pounced on the new-born. Within seconds she had the impala high up in the branches of a Marula tree.

Even though Ntsumi and her cub looked well fed, an opportunity will never just be left to walk off. Leopards have the advantage of being able to hoist kills keeping them out of reach of other predators like lions and hyenas that could overpower a leopard.

We found this female leopard not far away from where we last saw her about a day ago. She had been following a herd of impala around the area for the whole morning without any luck and her cub was not making it easy for her either!

Impalas are starting to give birth now and we have been seeing the new-born impalas a lot over the past week; rightfully so leopards are taking advantage of the vulnerability of the lambs as they are still relatively slow and dependant on mom for safety and guidance. Ntsumi’s cub was very interested in the lambs, running towards them without any plan and therefore disturbing his mother’s hunt as the impalas noticed him and ran off.

On our first sunny morning after a long stretch of overcast mornings we went out feeling hopeful for what the morning had to offer. With a male cheetah been spotted on the reserve we set off hoping to find him! A little tracking paid off when a flick of a tail tipped us off.

On our way into the area, we made our way across an open area and saw just a flick of an ear and the tip of the tail, and we realised that the male travelled a long distance into our reserve and was now right in the heart of the northern sector of Sabi Sabi. We sat and watched as he would roll around and just every now and then give the area a quick scan for either an impala to prey on or any potential threats.

We are so lucky to have a hyena den here at Sabi Sabi. Four curious hyena pups came out of an old termite mound, which is being used as a den site, as we approached the area. They carefully came closer to the vehicle, inspecting this strange object, before they lost interest and started playing with one another.

Female hyenas will leave the den site in search of food, and when they return the cubs will then suckle. She won’t bring food back to the den, as this can result in the food being stolen by other hyenas on the way back to the den site. Cubs will suckle for the first 9 months and are normally weaned by the age of 10-14 months.

In the early morning light, we decided to take a quiet moment underneath one of the iconic large trees found along the banks of drainage lines at Sabi Sabi. The Sycamore Fig produces large quantities of figs which provide life for countless species.

The African Green Pigeon is one species that frequents these massive trees that supply life for so many.

While resting its head on its mother’s back, this young hippo seemed to enjoy a siesta in the water away from the scorching sun.

The African Wattled Lapwing creates a shallow depression in the ground formed by the male who pushes his breast into the ground with a rotary movement of the tail while kicking legs backwards, he will then stand and move backwards pecking at the ground and side throwing material.

This mother had laid three eggs and will incubate the eggs for the next 28-32 days when the eggs will hatch.

Warthogs are known to use burrows dug in the side of termite mounds and this one seemed quite content with its chosen spot!