A week of magnificent seven and much more…

The orange skies were met with a rather exciting silhouette poised perfectly alongside a termite mound. The Ntsumi female. She seemed to be using the termite mound as a vantage point to catch sight of the impala moving in the thickets up ahead. She darted down to conceal herself among the long grass, moving slowly, albeit with purpose. A hyena came across her path, as we know they are notorious for trailing leopard from time to time, she quickly climbed onto a large fallen-over Marula tree, let out a rather raspy growl as the hyena passed by, then continued in her pursuit of a meal. 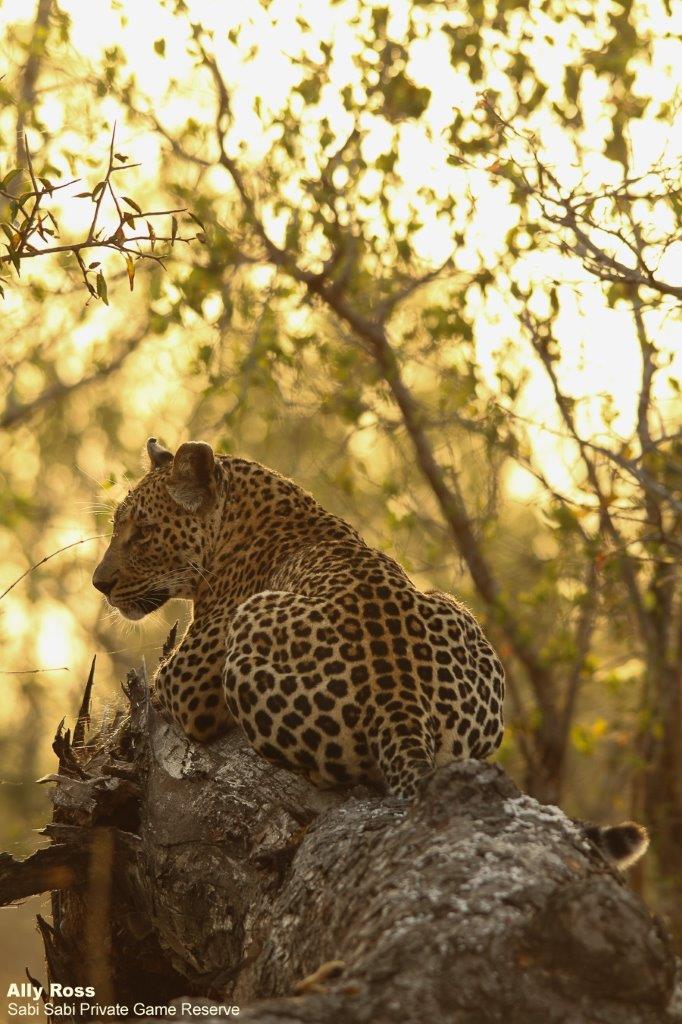 Later in the week, she was on the hunt again… Her posture suddenly changed to full-on stalking mode. Getting closer and closer to a thick shrub, making sure she doesn’t make a sound. And within seconds she pounced! Birds scattering everywhere, but one. She successfully caught a Natal Spurfowl. Plucking the feathers with her mouth, she got to the little bit of meat the bird had to offer. It didn’t take long before a hyena arrived, but there was nothing left for it. With this small appetiser, she kept on hunting, hoping for a bigger meal.

Six hyenas broke through the morning mist, dashing across the road ahead of us. Excited, we followed suit. Momentarily camouflaged, the young female leopard could not sit still much longer and broke cover, making a quick escape to a fallen-over tree. High enough for her to be out of reach, she waited for the hyenas to pass and made her way down. Much to her disappointment, a seventh hyena appeared from nowhere to investigate, sending her across the road and out of sight. A short but exciting sighting of this newly independent female.

Hyenas are known for trailing leopards from time to time, but seven rushing in was not what we were expecting. It was an interesting dynamic to witness. We were all wondering what may have caused the rushed commotion. 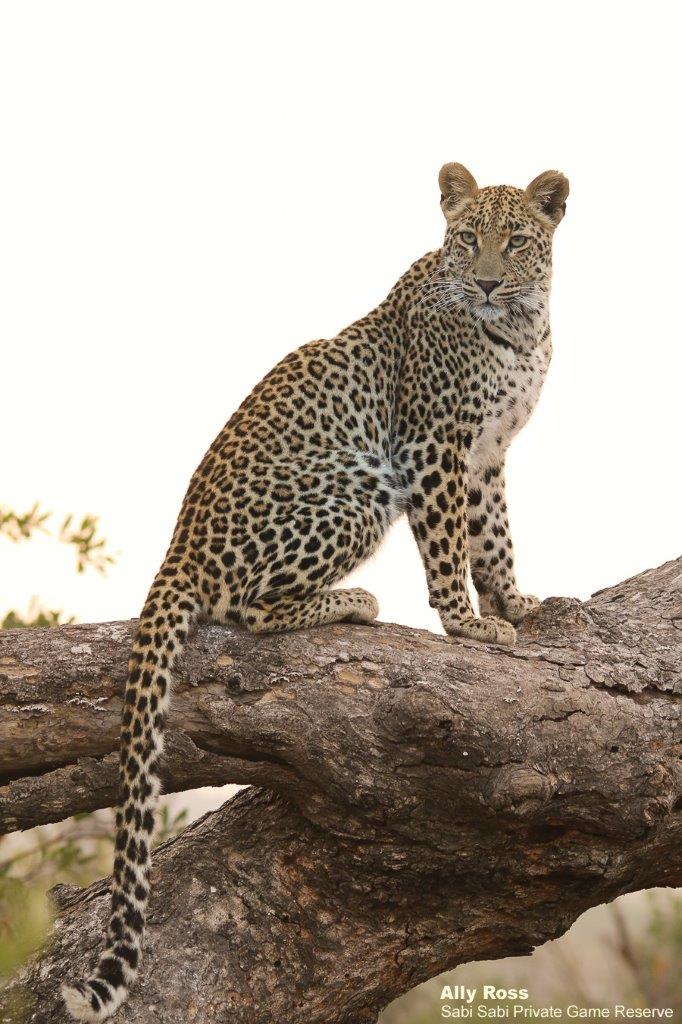 Kigelia female leopard had been seen with a kill, up in a tree, during the morning drive so in the afternoon we headed to the location. We found her – full-bellied and still fast asleep where she was last seen earlier in the morning.

We watched her for a while before making our way to our sundowner spot where to our surprise, found an African Wild Cat lying in the grass on one of our open areas.

We followed N’weti for some distance as he was moving very fast across the reserve, marking his territory as he went along. It seemed like he knew where he was going, as he ignored one or two herds of impala, and kept moving. He spotted a termite mound and moved closer to investigate and we could tell from the change of his posture, that there was something inside a hole on the side of the termite mound. He rushed to take cover as close as he could and waited.

Leopards are known for their patience when it comes to hunting and they do not rush to attack but wait longer until they get a clear opportunity to attack. This male leopard did the same as we spent more than two hours with him, and still, he did not leave. As we waited in anticipation, a warthog kept on popping its head out of the hole to check its surroundings before going back inside. Several times we watched this happen and we all thought possibly the warthog was aware of the leopard’s presence. It was interesting to see just how much patience a leopard has!

Shortly after leaving the lodge, we found tracks of a female lion, which we thought might be those of the Southern Pride female. We found her sub-adult daughters the day before, not too far from where we found her tracks this morning. We made our way to where we left the subs, but only found their tracks. We knew they must be somewhere close by. As we tracked them, we heard a big growl. A very scary sound to hear, but when tracking an animal, it is the best sound! We are on the right track. We made our way into the bush where we heard the growl and located the Southern Pride feeding on a buffalo calf. There was not much left as the mother chewed on a leg and one of the daughters on the skull. What a successful and exciting tracking exercise!

Tracks of a pride of lions were found not far from Bush Lodge as we started our morning drive. It took a lot of expertise in tracking as they were moving through dense bushes, making it very difficult for our trackers to see their tracks. It took a lot of walking trying to find the actual direction to follow and eventually the lions were found in a drainage line resting close to a termite mound.

The Styx Pride has been moving around our reserve a lot and not staying in any specific area for longer than a day or two. This is quite common for this pride which makes keeping up with their location difficult. It is a tough job for the females to keep their cubs safe and well fed. If other males that are not the dominant males of their territory find them with the cubs it would not be good news hence them needing to continuously move to avoid any intruders.

Upon heading out on safari, we immediately noticed lion tracks at the entrance to Bush Lodge. A short tracking exercise led us to the Styx Pride. After a run-in with the Kambula females, the Styx Pride have been through some difficult times. They did however look in better shape after what must have been a large meal judging by the size of their bellies. One of the cubs still has some flesh wounds but seems to be healing well with the protection of the pride. There is still one cub and one adult female absent from the pride. 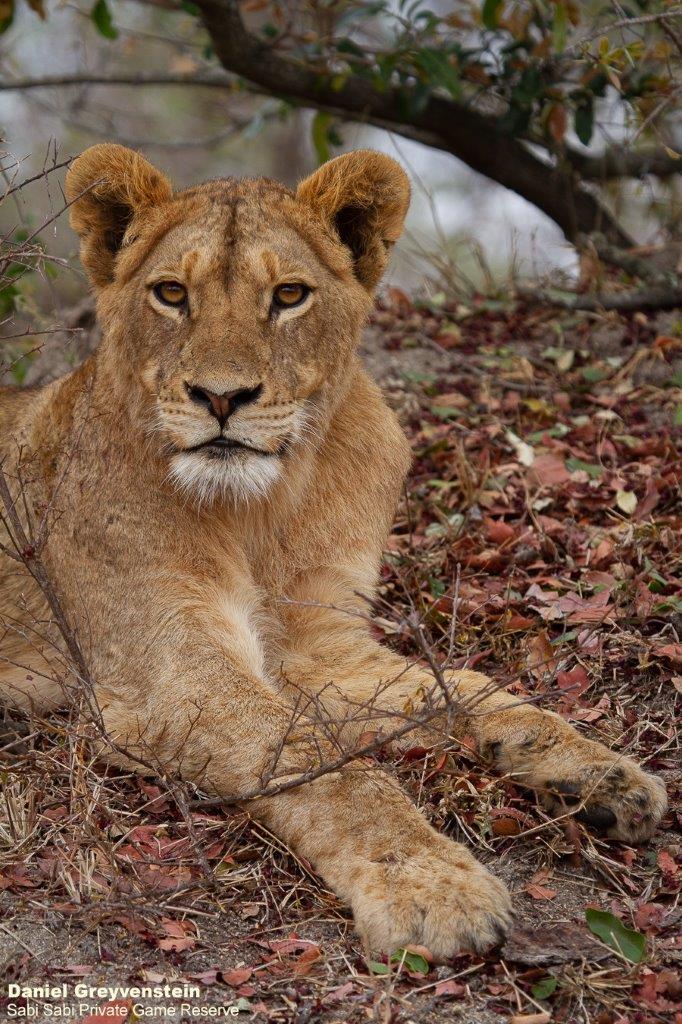 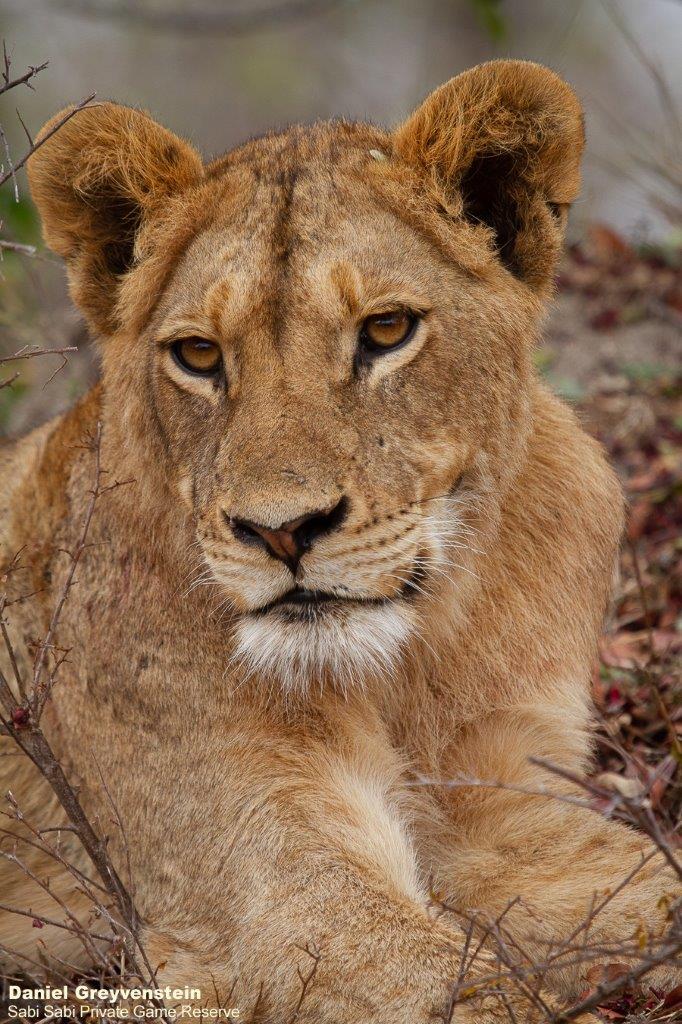 We found a herd of buffalo still resting very close to the road, so we spent some time with them. As we were about to leave them, we spotted a pride of lions approaching the herd. The herd was not aware of their presence. We waited patiently but the lions took their time, waiting for the perfect opportunity to hunt.

Lions in this area are known to be very patient in following these big herds, and often, are successful. Most of the time they spend trying to spot any weak members of the herd – looking for the sick, injured or young – as they are easy targets. Despite this, these hunts do not always go to plan as the herd fights back to protect their own. We were at the right place at the right time to witness this.

Watching this cheetah mom and cub hunt was incredible! Although the hunt was unsuccessful, sitting and watching as she planned out her hunt was amazing to see. A herd of impala was her target. She made her way through the open area, leaving her cub behind, hoping he would remain out of sight. If he sprints too early, the whole hunt would be spoiled. But unfortunately, the impalas saw her before she could make her next move, and they all ran away. Calling back her cub, they climbed on the nearest termite mound, keeping the impalas within eyesight.

Cheetahs normally hunt in wide-open areas where they can use their speed to their advantage. But being in an open are, they must plan their hunt very carefully, so they are not seen by their prey.

It is a cloudy morning at Sabi Sabi, giving a sense of mystery and adventure. Wondering what the day will bring for us, rain or yet again spectacular sightings. This morning was no exception of a spectacular game drive! The morning started off with two wild dogs that caught an antelope. As soon as they finished their kill, they moved around in search of the best spot to digest their meal. They settled in a small drainage line, hidden away from anything that might come their way, and providing shelter from rain or sun!

Wild dogs can be seen in packs from 2 to 50 individuals but on average about 12 individuals in a pack. They are extremely good hunters, and the more individuals they have in their pack, the higher the success rate. Wild dogs will normally hunt either in the early mornings as soon as it is light out, or in the afternoon at the last light of the day.

On our way back to the lodge after a successful day, we did not expect this last sighting for the day. Two honey badgers walked in the road in front of us. We kept an eye on them as they went up a big termite mound and disappeared into a burrow.

Honey badgers are known as the most fearless animals in the world according to the Guinness Book of World Records. They will not hesitate to take on a big male lion to defend themselves!

What an amazing sighting! Not even reaching mom’s shoulders, we saw that its umbilical cord was still attached, meaning it is only a few months old.

Baby giraffes are approximately 1,5m tall when they are born, and almost double that in their first year. They grow about 0.5cm each day! 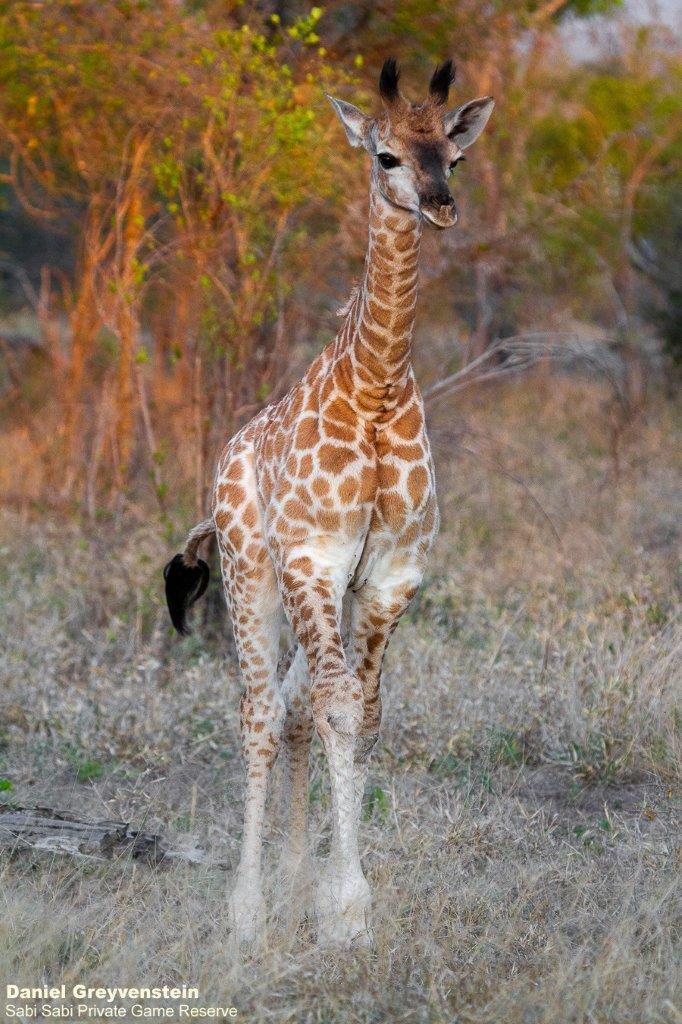 What an unusual sighting! There were about 30 warthogs around a watering source, along with impalas and nyalas of all sizes and ages. A real feeding frenzy! We enjoyed the sighting as we watched how the warthogs chased one another around trying to find the best feeding space. Some of them came towards the watering hole, providing for excellent photographic opportunities. 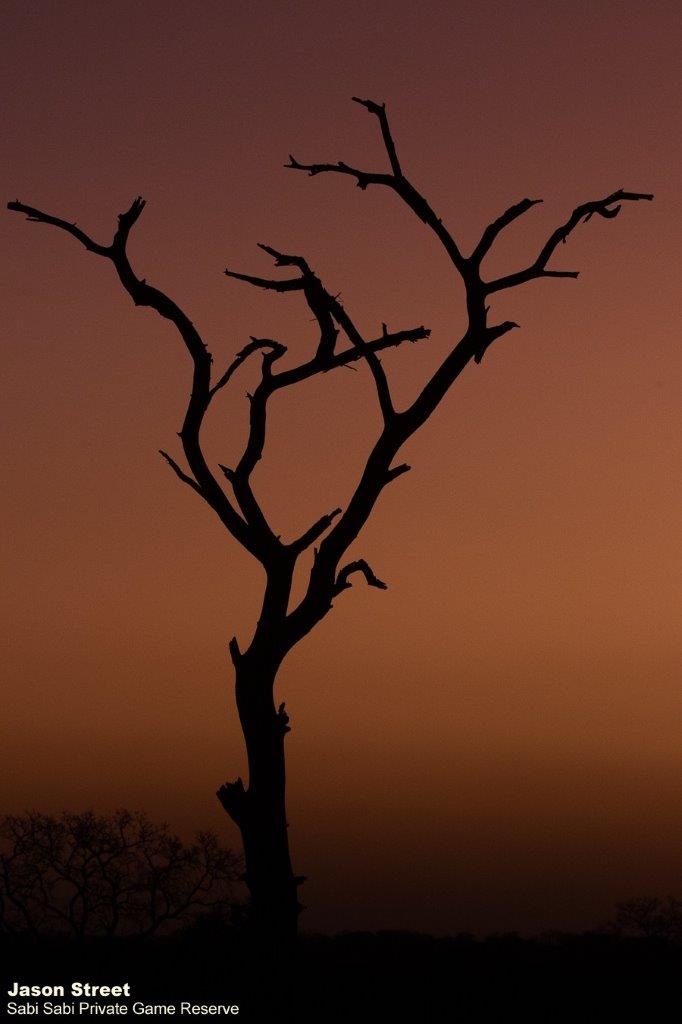