Our week started off with an afternoon safari into the South of our reserve to look for a male lion that was seen in the morning after our guests had indicated that they wanted to see a “beautiful male lion”.

We heard that there was a spot available to help track and find the male, so Coenraad and his tracker Donald jumped at the opportunity to do what they love, and that is tracking and finding animals. They struggled at first but then as they approached one of the small open areas there he was walking out of the drainage line in all his glory. They followed him for a bit and watched as he took a nap on a small termite mound not too far away. After that, they carried on and went to watch as some vultures were feeding on a dead buffalo. To the surprise of our safari team and our guests, a lone hyena showed up and decided to take his share, being very aware of his surroundings and watching for any approaching threats to his meal.

Our guests were amazed by the beautiful male lion and said that that is exactly what they meant when saying they want to see a “beautiful male”.

We decided to search for the Southern Pride and were successful! It was wonderful to see them on the move and followed as the beautiful female led her daughters through the grass.

We started off one afternoon tracking two (2) leopards that were found mating earlier in the morning. We made our way through the harsh terrain to see Kigelia moving through the grass with a male known as Mawelawela. We followed them for a while as they would stop and mate occasionally – an incredible sighting!

We found Golonyi resting on a tree stump. After a few minutes of posing left and right for the camera, she jumped off the stump, making her way through the bush. She noticed a herd of impala not too far away from her, and you could see the change in her body language. It went from strolling to stalking. Using a termite mound as a vantage point, she established where the impala was, and what her best approach would be. As she walked, she made sure that she remained concealed, using the thickets as her cover. The herd of impala did not notice her but moved in the opposite direction into a more open area, and she gave up her hunt for now.

When leopards hunt, they will try to always stay hidden from the prey. Only when they are close enough will they pounce on the prey they were stalking.

After some wild dogs had been seen during a morning safari, we decided to follow up and try and find them in the afternoon. Knowing that it would be a challenge, we were pleasantly surprised to find out that they were still sleeping at the same waterhole as the morning, only lifting their heads every now and then or moving to find another shady spot.

After leaving the wild dogs, our focus shifted to that of birds, and we were fortunate enough to watch some Brown-headed Parrots playing around in a dead Knobthorn tree.

Before we knew it, it was time for us to stop and admire the sun setting while enjoying a refreshing sundowner and discussing just how special the sighting of the wild dogs was. Seeing them just lying around was a real treat because once they get moving, they move at pace and the sighting can be over very quickly. 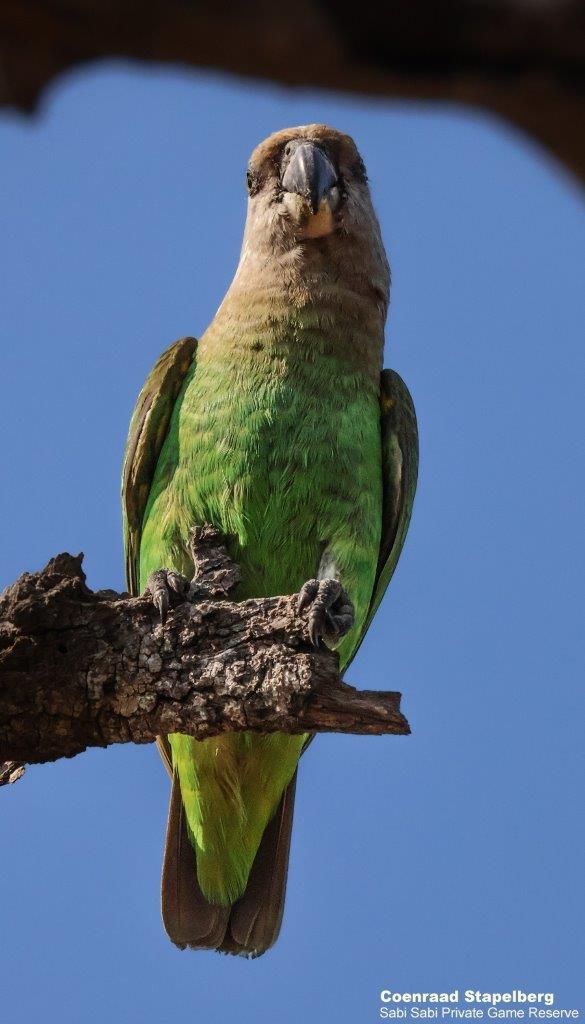 We stopped close to a waterhole to get direction on some alarm calls we had heard. A hippo popped out and gave us an opportunity to snap some moody shots of him. While stopped, we heard the calls of a male lion echoing through the drainage sending the impala alarm calling again. 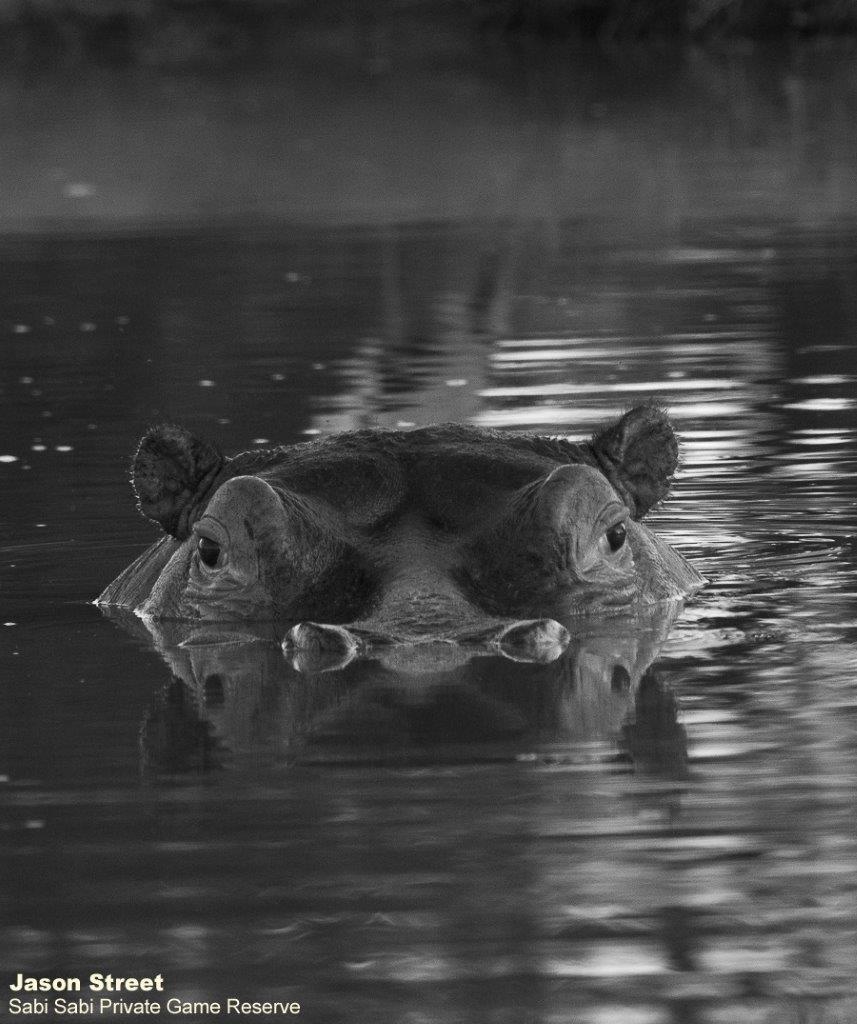 We had hoped to find some elephants and it wasn’t too long before we came across herd. The herd was massive, so we spent some good time with them, looking at all the different individuals with some drinking from a waterhole as the sun began to set.

On a quiet and hot morning, we decided to head to a drainage line with large Jackalberry and Sycamore Fig trees and do some birding. We got lucky with this Grey-headed bushshrike coming out of the thicket and showing off its beautiful colours. The Grey-headed bushshike could be confused with the Orange-breasted bushshrike which is a lot smaller and has a smaller bill and a yellow forehead.

After fresh dung was deposited, this Wood Sandpiper, alongside a few other bird species, wasted no time in digging in.

The position of the yellow ring around the eye of this Red-billed Oxpecker, along with the down-turned bill made it look quite grumpy, almost as if it was displeased with the overcast weather conditions.

With the Marula fruiting season having come to an end, a Yellow-footed squirrel took full advantage of a Marula nut he had found.

Early mornings are still cold, so these dwarf mongoose snuggled up close together trying to warm up in the early morning sun.

Out of a large herd of buffalo a unique female stepped out into the dappled light, giving us a beautiful opportunity to capture her. The beauty of witnessing large herds of buffalo mean that we get to see unique individuals such as this surface from the “crowd”.

The herd surrounded this small baby as it flopped around playfully enjoying the dust that was settling around him. We watched as the herd gently helped him up from his less than graceful tumble. Elephant herds are known to be incredibly attentive to family. They have strong social bonds that run deep through generations. This comes in handy when raising young babies in the herd. “It takes a village to raise a child”. 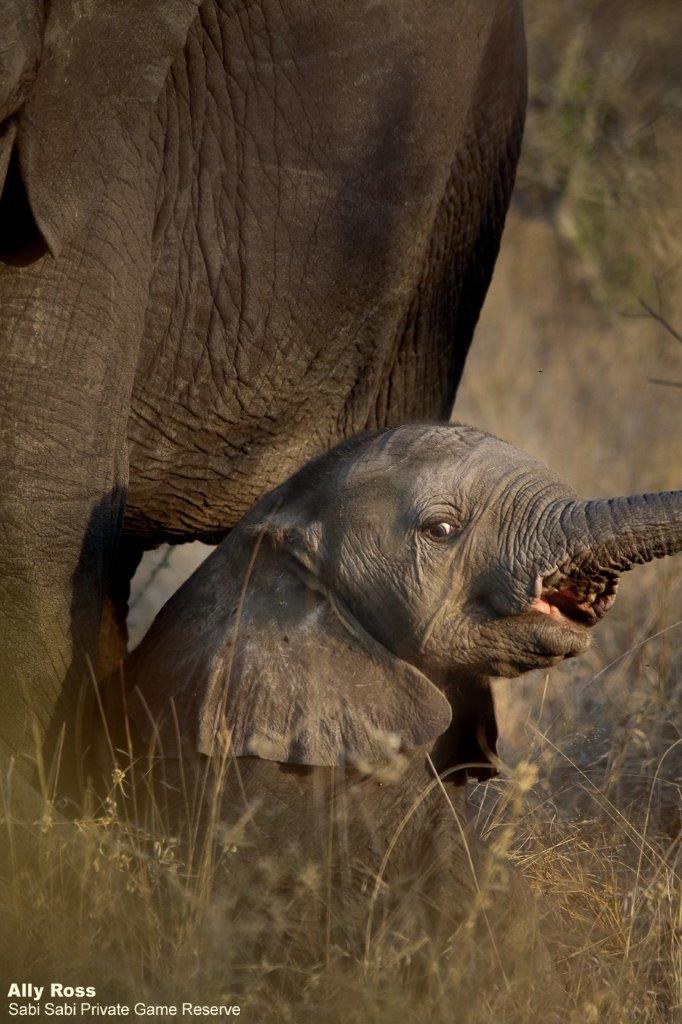