This past week has seen massive herds of buffalo on the reserve… and where there are buffalo, there are lions…

Not far from Selati Camp, a buffalo herd of a couple of hundred were in the vicinity of a waterhole. While watching them, one of our guests spotted some movement further on along the drainage line. Upon investigation, we found some lions. Excitement filled the air and we decided to wait and see what would happen…

In a situation where lions follow these big herds of buffalo, the scenario that comes to mind is lion kill, but this is not always the case. Lions are good hunters and can be successful in hunting buffalos, but buffalos won’t go down without a fight, especially in big herds like this with lions trying to stay undetected until they are sure they are all ready to try to hunt. As we were watching the buffalo getting closer to the pride of lions, one cub was determined and brave enough to get into a stalking position and suddenly, she started chasing. The older females, noticing that the cub is chasing alone, joined in to not only protect but possibly find an opportunity for a kill. The buffalo ran but regrouped and turned back quicker than the lions would have anticipated and chased the lions away.

After their failed hunt, the Styx Pride were still in search of a meal, moving from open area to open area. Lions are the only truly social cats. Their social structure is matriarchal, with groups being formed and based on close bonds between females. Males will fight for the right to oversee a territory and have rights to females. Females tend to stay with their natal pride but could disperse with brothers who are evicted at around three years old.

We woke up at Selati Camp one morning to the sound of lions roaring – or so we thought. Ronald was busy with wake-up calls when three male lions appeared from nowhere, so he quickly made his way to the safety of the main lodge area. The lions didn’t seem to be bothered with his presence as they were focused on fighting with another male. All the sounds we had heard were from these lions, within the lodge grounds. We then noticed the Styx Pride lionesses lying in front of camp.

Hearing these lions roar very close to the camp was amazing! Male lions roar for different reasons but mostly to assert their dominance over other males in the area. We could not get a clear ID on the males but assumed they might have been the N’waswishaka males chasing another male who came too close to the Styx Pride.

In situations like this, male lions will always try to protect their prides and not tolerate any other males in their territory. It was incredible watching them as they ran past camp but were not able to locate them again as they continued to chase the intruder. The rest of the Styx Pride were later seen at the waterhole in front of Selati Camp, with all members accounted for, but visibly unsettled, alert and weary of their surroundings.

The Mhangeni Pride had spent a couple of days resting close to a waterhole, with full bellies. They then became active as they began grooming, stretching, and drinking water. Lions have protracted claws that are sheathed when relaxed. When tendons are flexed, the claws are exposed. Scratching on trees will help keep claws sharp and in good condition. It also helps to stretch tendons that are used to flex the claws. 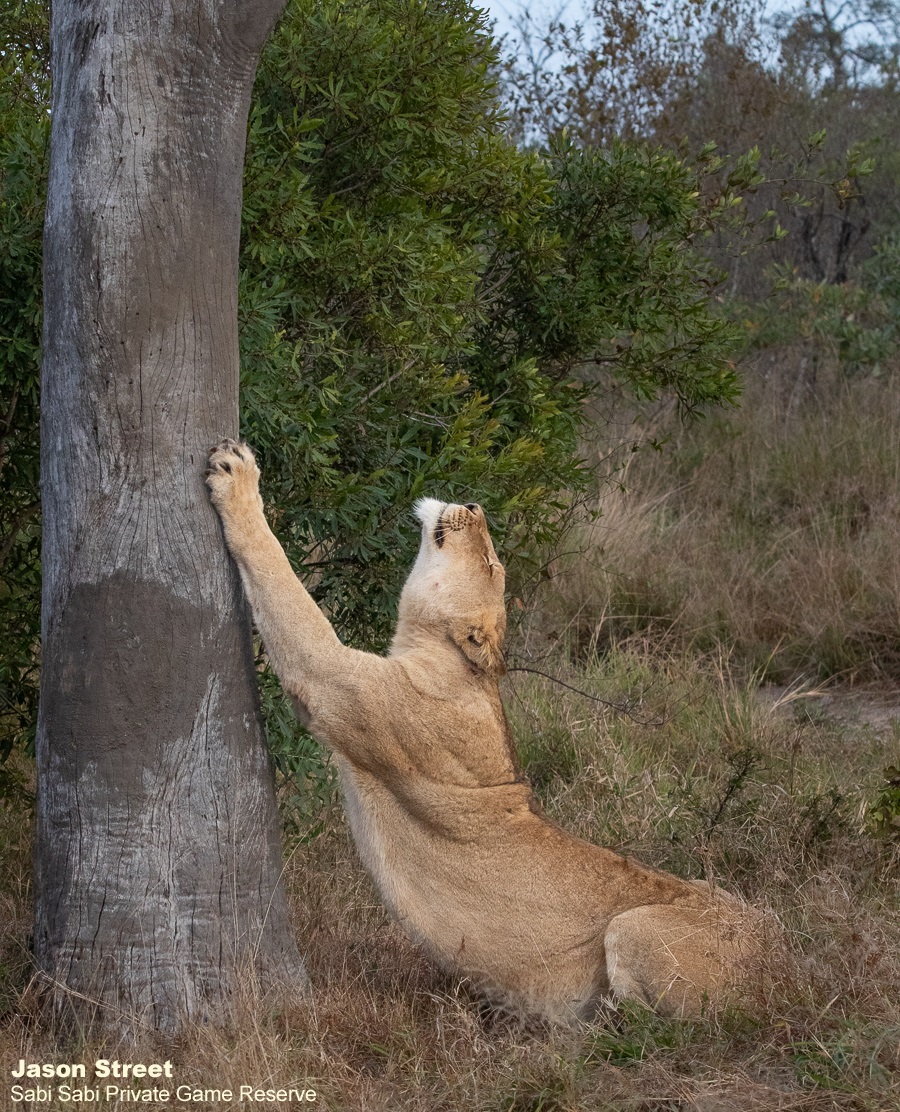 Tracks for the Mhangeni Pride were seen not too far from the Gijima males, with the pride also showing interest in the large of herd of buffalo moving through the reserve. The pride was eventually found sleeping and once the sun set, started getting active again and on the trail of the buffalo.

An interaction between the Mhangeni Pride and Gijima males is looking imminent with the pride only about 500m from the males. The Southern Pride female had eventually moved off and joined up with her two daughters who were also not far from the Mhangeni Pride. Interesting times lay ahead should the Mhangeni Pride choose to stick around for an extended period. 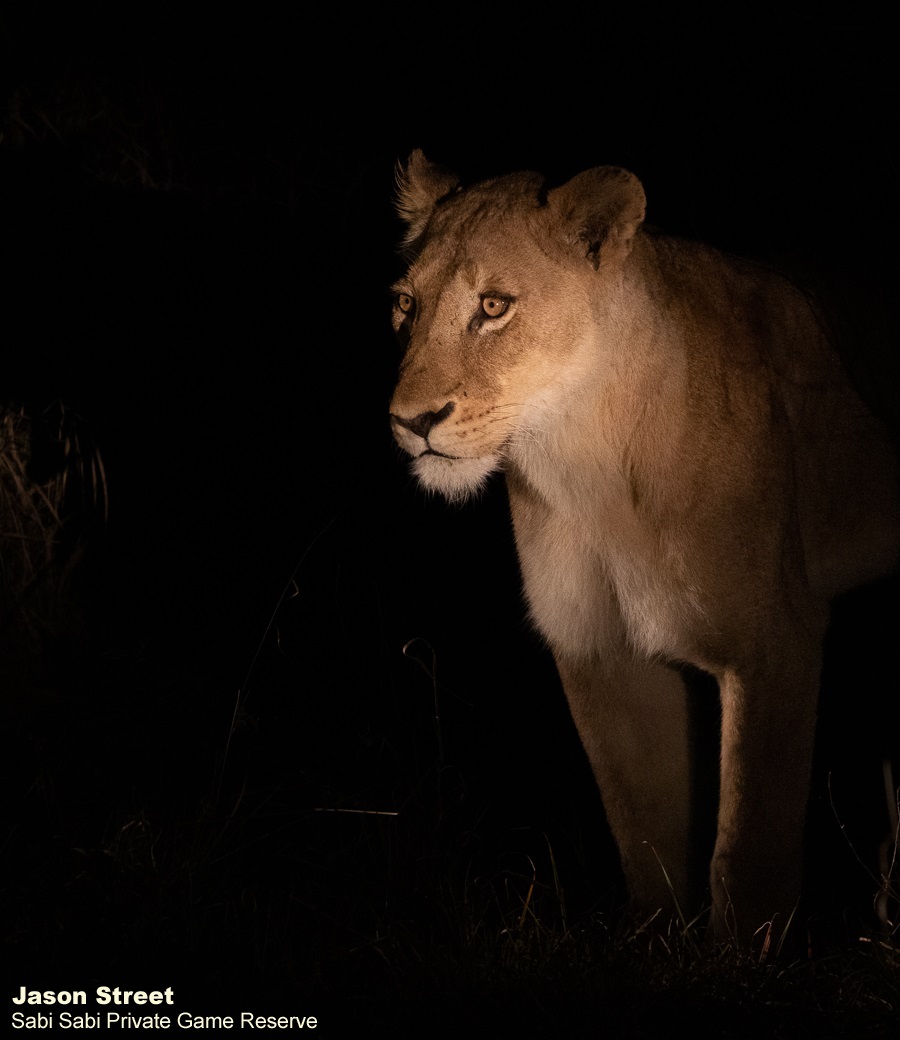 We found the two Southern Pride subs not far from a big herd of buffalo. The cubs were very alert to every movement near and far. We have been seeing these two by themselves a lot more often of late. Normally, as they mature, they will stay with their mother to grow their confidence and master the technique of hunting, but with the presence of the Gijima males, they do not seem to be comfortable around these males yet.

We tracked Ntsumi during the morning without any luck. With afternoon safari, the team set out again to attempt to track her again. We had a brief sighting of her before she set off into the thickets again. This made it much easier as we knew in which general direction she was moving and were able to find her again. To our surprise, Golonyi also made her way into the sighting! This is very rare as you don’t normally see two adult leopards in one sighting. They had a brief disagreement before they took refuge for shelter in a tree nearby and the other took her place on a big termite mound. Two hyenas heard the noise and came to investigate. With them approaching, the two female leopards ran away seeking shelter elsewhere. After a few minutes we saw Golonyi up in a tree again hiding from the hyenas where she made herself comfortable. Once again Ntsumi made her way back to where Golonyi was up in the tree. She did not dare to go closer and took her place underneath a tree nearby. A few minutes later the hyenas came closer again and Ntsumi decided to move away from Golonyi and the hyenas. What an amazing sighting!

Finally, after being unsuccessful for a few days, Ntsumi managed to kill a duiker. The kill was hidden, and she went and collected her cubs from a nearby drainage line. Both cubs and Ntsumi managed to feed well before a hyena found them. The ever-alert Ntsumi quickly grabbed the kill and hoisted it into a tree. The cubs both ran off into a thicket leaving Ntsumi in a stand-off with the unwelcomed guest. With the kill and cubs safely out of harm’s way, Ntsumi fell asleep with a full belly as the sun set.

Hyenas are one of the biggest threats to leopard cubs. The fact that they can climb trees from a very young age increases their chances of survival tremendously. 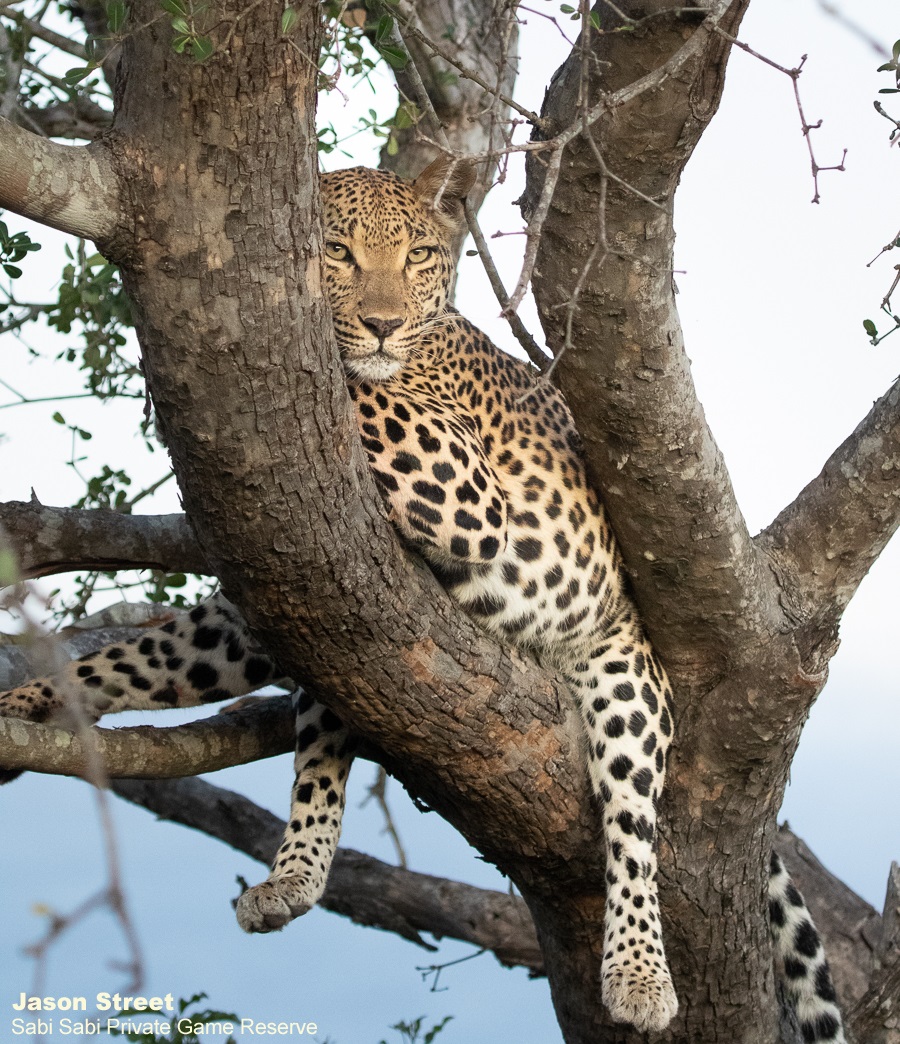 We were having morning tea with our guests before departing for safari when we heard a male leopard vocalising not far from camp. We left everything and rushed out. N’weti was found close to Selati Camp, heavily marking his territory.

Male leopards usually patrol their territories over quieter times of the day; and during the early morning and late evening they will roar as part of their territorial marking to announce their presence to any other leopards in the area. This male was really moving fast through his territory, turning to even the smallest of bushes to spray his urine before moving to the next one. In recent times, he has successfully hunted warthog from inside their burrows, so it was no surprise that as he moved around, he took the opportunity to dig into some fresh warthog burrows, but to no avail this time.

Three male cheetahs made their way through a rocky outcrop towards a large open area in pursuit of a bachelor herd of impala. The cheetah got close and gave chase, but the impala managed to get away. The coalition then took to some shade in the heat of a warm winter morning.

Male cheetah form coalitions after dispersing from their mother which improves their chance of survival through better hunting success. Being part of a coalition enables them to hunt more frequently and bring down larger prey. 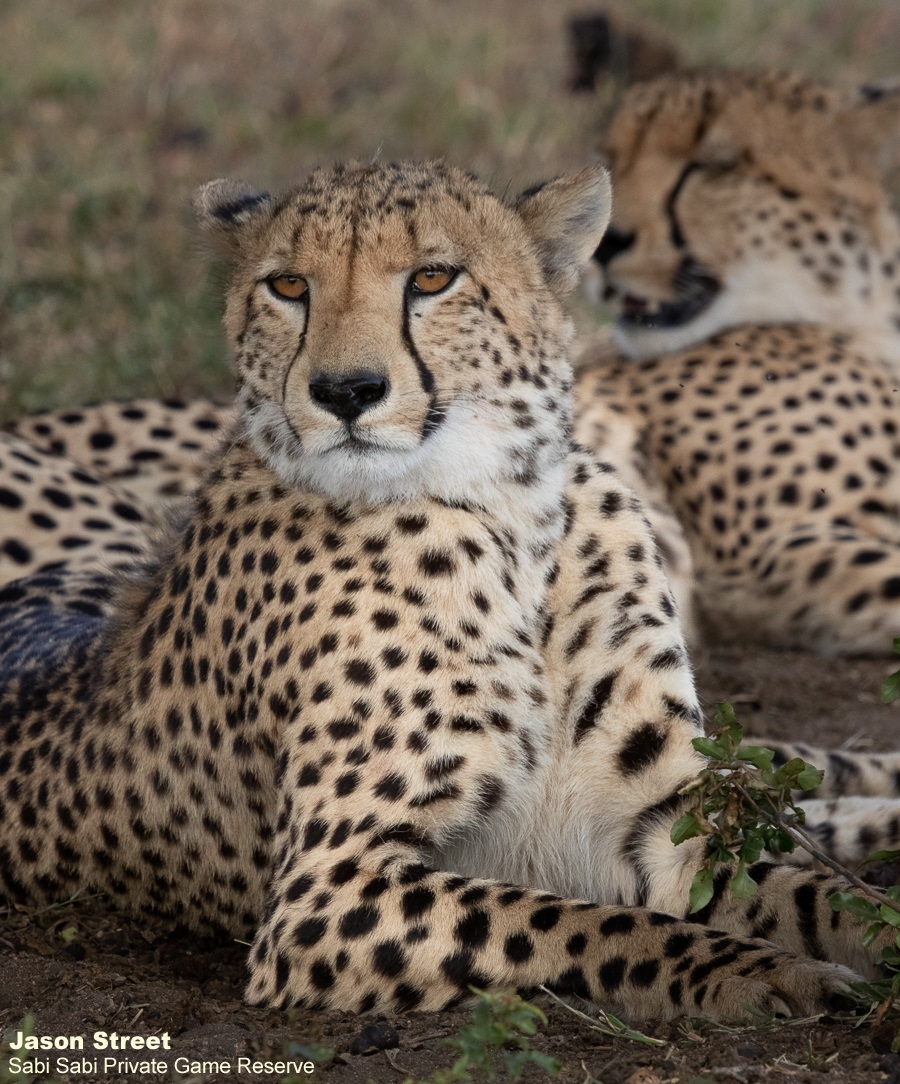