Every ranger has a list; a list of animals or sightings that they one daydream of seeing with their guests. Animals like pangolins, aardvarks and honey badgers are on top, but with them is one that feels even more elusive … the den site of a female leopard.

Late last year, rangers and guests were blessed with the sighting of the Ntsumi female leopard mating with the N’weti male, a rare occurrence in its own right. 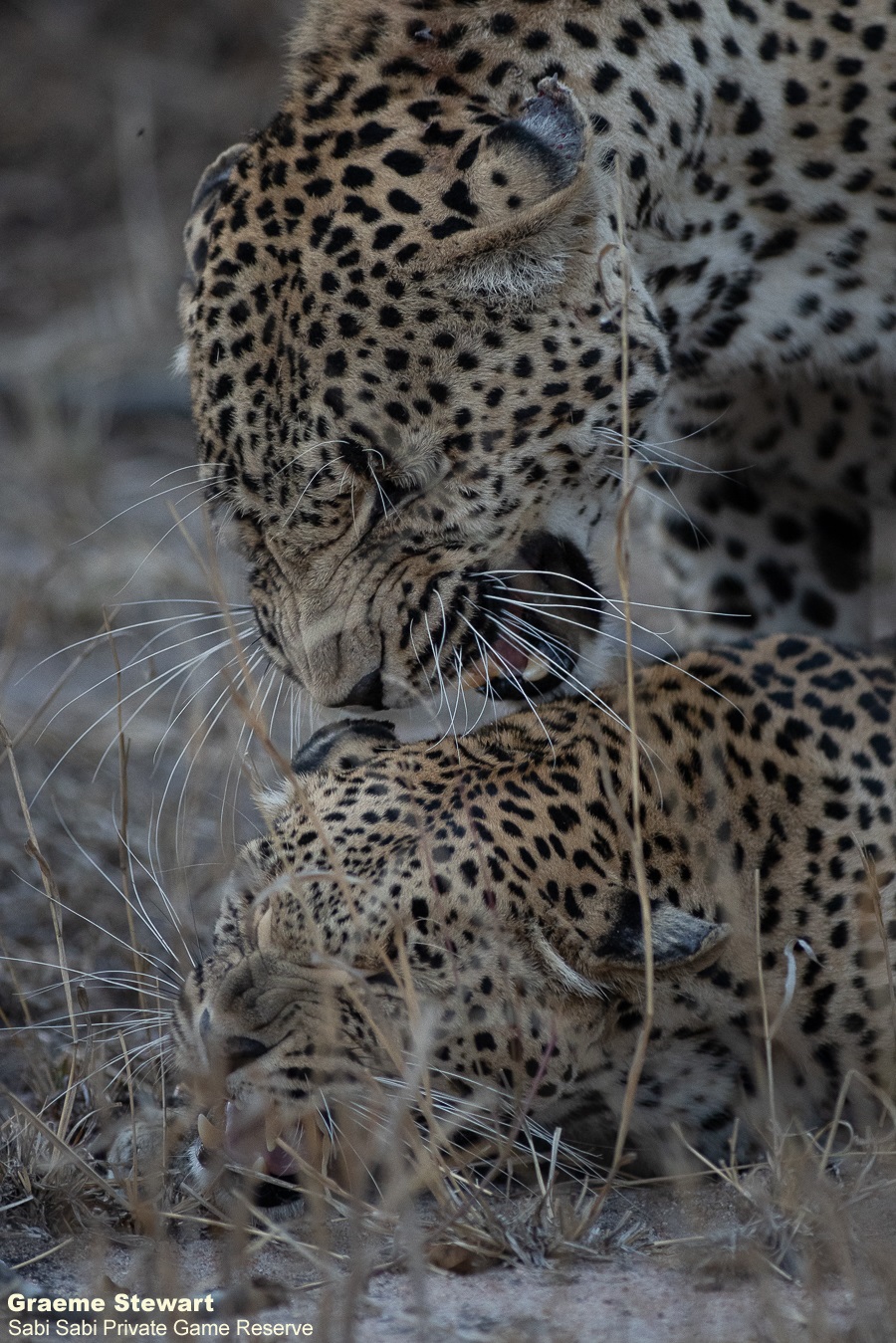 With her most recent cub, the Golonyi female, reaching maturity and becoming independent of her mother, it was time for the Ntsumi female to mate once again. 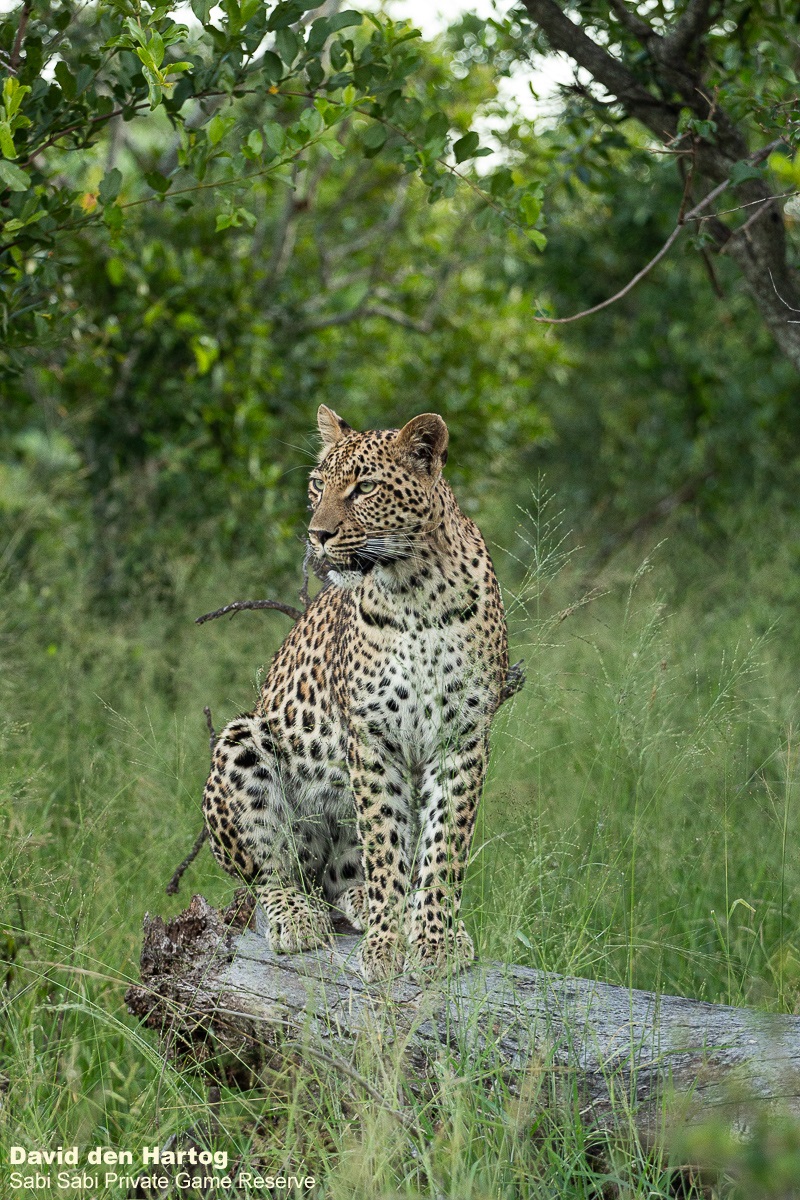 Female leopards will search out males when they are in oestrus, constant scent-marking and calling is done to catch the ears or nose of a potential mate in the area. A span of 3 – 4 days of constant mating takes place once they meet up. At the peak of her oestrus, the pair will mate every 15 to 30 minutes. After all is said and done, the two leopards go their separate ways. Not too long after, the whispers began in the safari team, the possibility of new cubs on the reserve looming overhead.

The gestation period of a leopard is around 90 to 105 days, so we knew we were in for a much-anticipated wait before the search could begin. The landscape of Sabi Sabi offers a large array of choices for a den site. The cubs could be hidden in the nooks and crannies of a rocky outcrop or in the deep thickets of a dry riverbed. But leopards are creatures of habit, den sites are used again and again, some even use the same den site that they were born in. You know what they say, there’s no place like home.

We knew of a couple of places the Ntsumi female had denned before. I often caught myself gazing off into the thickets with the hope of a tiny leopard cub catching my eye whenever I drove past. The theories of riverbeds or termite mounds, even deep thickets in the eastern part of the reserve, bounced off the walls of the Rangers’ room. During December and January, the sightings of the Ntsumi female diminished slowly, until we eventually didn’t see her for almost two weeks.

“She must be denning somewhere around Three Dams.” (A road close to where she had denned before).

This sentence was repeated almost daily while rangers prepared their gear for the afternoon game drive.

Finally, she made an appearance again, not too far from Selati Camp. Moving slowly through the grass in the dark of night, the first thing I looked for were any suckle marks or any sign that she was lactating from her teats. My tracker, that night, was one step ahead of me. He turned to me and smiled, then pointed at her while nodding his head. Yes, she was indeed, lactating.

This was the first confirmed piece of proof that she did actually have cubs. Now, all we had to do was find them. I tell you, Dear Reader, that is very much easier said than done.

Cut to a few weeks later when my tracker, four lovely guests, and I headed out in the afternoon to look for a leopard. We searched the entire afternoon with no luck. Then just before sunset, the sharp eyes of Sydney on the tracker seat spotted female leopard tracks. We hopped off and slowly walked along the road to investigate.

“These ones are very fresh; we can find her.”

Sydney muttered softly to me; the instant nodding of my head echoed his statement. We had just over half an hour of light left so we had to get to work. We followed them, then lost them, then found them again and suddenly, the tracks just vanished into thin air. From the last track we couldn’t find which direction she had walked off the road. It was like she’d been airlifted from the spot and been placed somewhere else.

We circled the area for as long as we could, milking every last drop of light from the sun. But eventually, we knew the trail had gone cold and a gin and tonic for our guests was an absolute necessity. So, we settled to watch the burnt oranges of dusk disappear before heading back to camp.

The next morning, we were headed straight back to where we’d lost the tracks, combing the surrounding area to see if she’d popped out on the road at any point during the night. Then the call came on the radio. They’d found a female leopard on the exact road where we’d given up on our search the previous evening. I won’t lie to you and say my three-point turn was smooth or graceful, but the energy from the guests and my tracker made up for the bushveld massage I gave everyone on the vehicle.

We arrived and one of the rangers guided me into the thicket where he’d seen her walk into. Then I heard his hiss over the radio, “I just saw her cubs! Do you have a visual?”

I felt my heart rate skyrocket and turned to my guests with possibly the biggest smile on my face that I’ve ever had.

“Folks, there are cubs here.”

We navigated a thicket of Tamboti trees and there she was, lying down against a tree trunk. I told my guests that we must be quiet and see if they come out. So, we waited, the only noise was the soft rattle of camera shutters and deep breaths brimming with anticipation.

Suddenly she called, a soft gentle call … a soft kind of “Hhummpff.”

Then, out of the thickets came a tiny leopard cub. It ran out and jumped onto its mother, and she groomed it between her front paws. At first glance I couldn’t believe what I was seeing. Sometimes I still wake up thinking it was a dream. A leopard cub! One that couldn’t be more than 5 weeks old.

That moment has cemented in my mind as one of the highlights of my career. To my guests, Austin and Kate, thank you sharing your videos and pictures with us. Marcello and Juiliana, thank you for your never-ending smiles and enthusiasm.

So far, we think there are two cubs and for the next month and a half, we will leave the Ntsumi female and her cubs to themselves. But when the cubs reach around 3 months old, we begin the jaw-dropping experience of viewing young leopard cubs.

The feeling of ticking an animal off that list that looms in the mind of all rangers is unmatchable. It is emotional and almost overwhelming. I will never forget that day or the wide grins of my guests behind me.