You may be wondering what I mean exactly by the title “Tricks of the Trade”, but in order to explain, we need to start off with the basics of parenting.

Simply put, we as humans did not just magically become who we are today and instantly know what we know by chance. It was all done through the years of growing up, where our parents taught us what to do, as well as us learning from how they behaved. Taking that into account, fast forward to who we are today, and we realise that we are, in some way, shape or form, part of our parents. This usually comes down to how your parents raised you and what you decided to learn from them. With animals, they can’t be as picky as us, as their lives are pretty much defined by survival, finding and catching food and finding a partner to mate with in order to pass on their genes. To do this, they need to watch their mothers (and sometimes fathers) very closely because unlike us, many young animals don’t have their parents around for 18 years (some maybe longer…) providing for them. They have more or less 2-3 years before they have to be able to fend for themselves. Some predators, like lions, kick the males out at a young age but the females generally stay with their mothers forming the pride but with leopards who are solitary, the time frame is quite short before they have to go out on their own to find their own way.

I am going to be sharing our experience with a female leopard and her cub that I had a chance to witness recently.

It was a cool winter’s morning and I decided to make my way to the eastern section of the reserve to follow up on a recent sighting of Ntsumi and her cub.  As I left the lodge, I saw a few giraffe feeding on a tree in the distance as well as some zebra nearby grazing in the adjacent open area. I stopped the vehicle just to listen for any kind of warning calls given by birds or animals that could alert us to the presence of a predator. Nothing. It was very quiet in the bush. I continued driving. As we got closer to the far eastern section, where I thought we would find them, we scanned the area from top to bottom but they were nowhere to be found.

I had been circling the area, driving up and down the roads several times, stopping to listen every couple hundred yards or so, but all to no avail. By now, about two hours or so had passed, and it was starting to warm up. The predators would probably start looking for some shady areas to rest for the duration of the day until it got cooler, and darkness fell. We drove towards a boundary road on the eastern side of the reserve in a final effort to find tracks that could give me a rough idea of her whereabouts. We approached the boundary road and turned right and there they were! What luck! They were walking toward me. 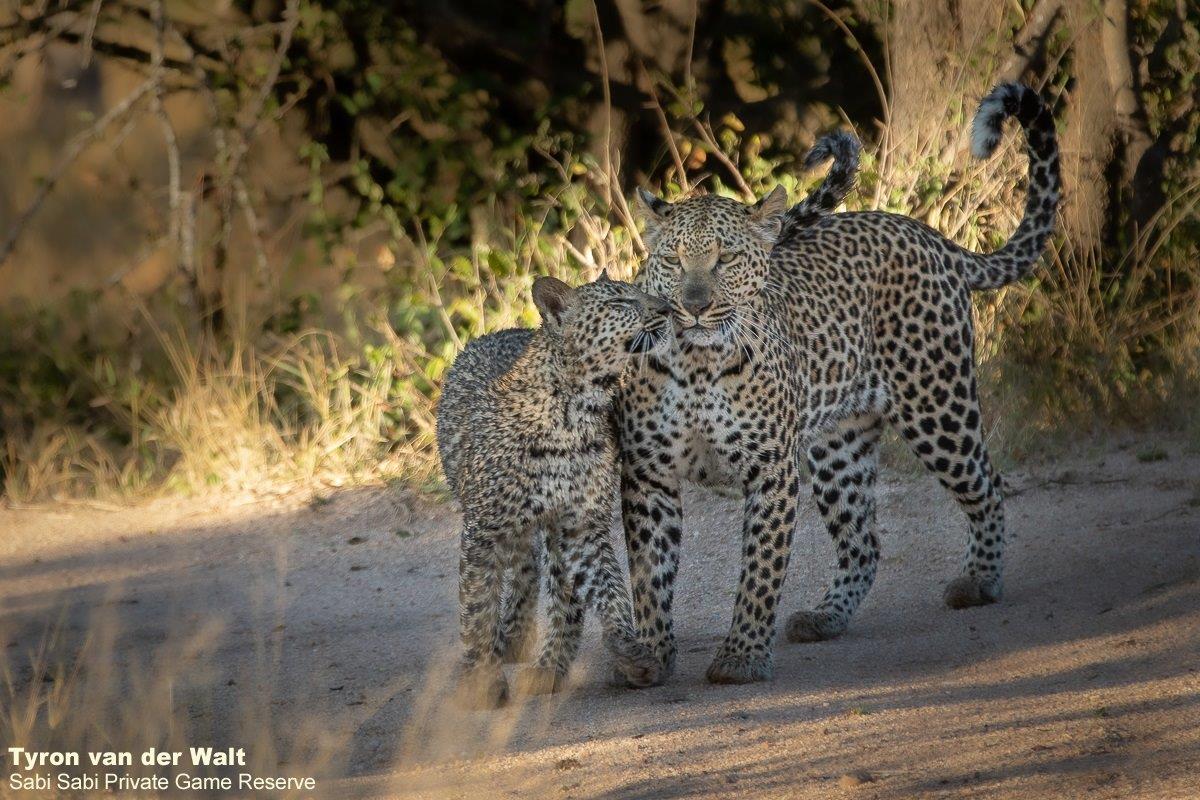 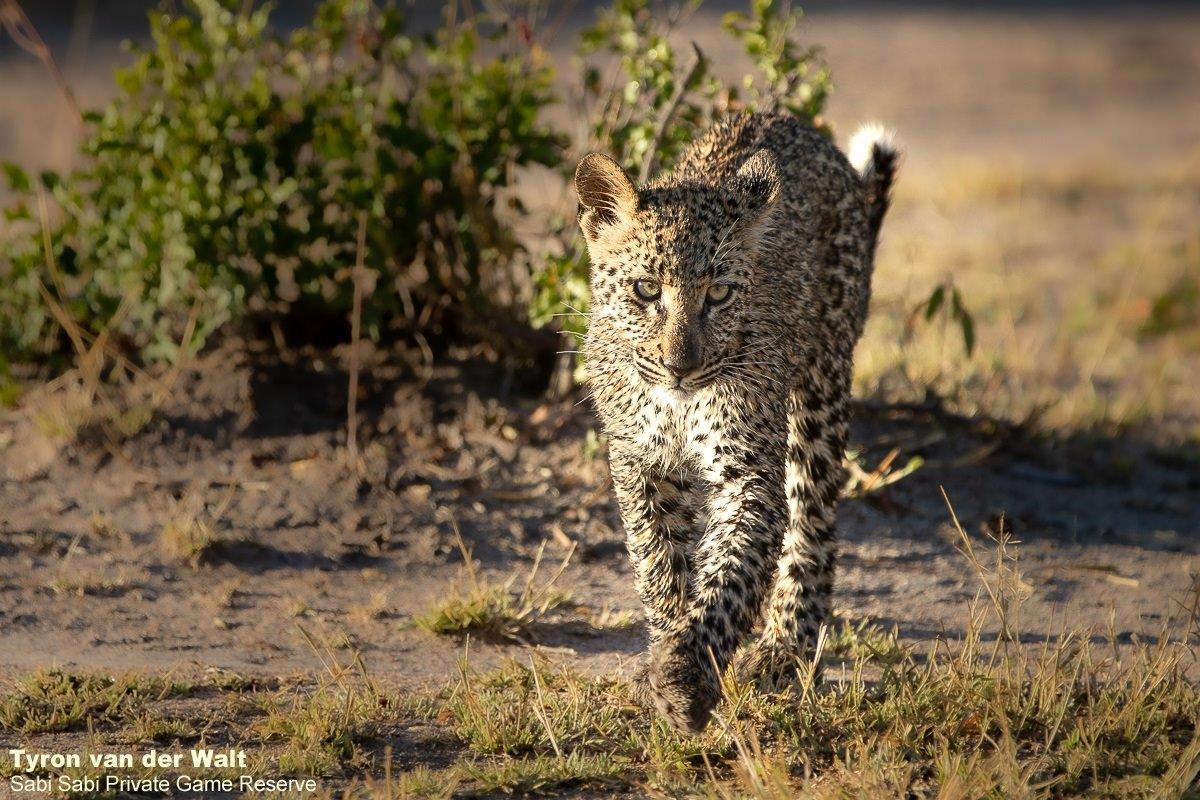 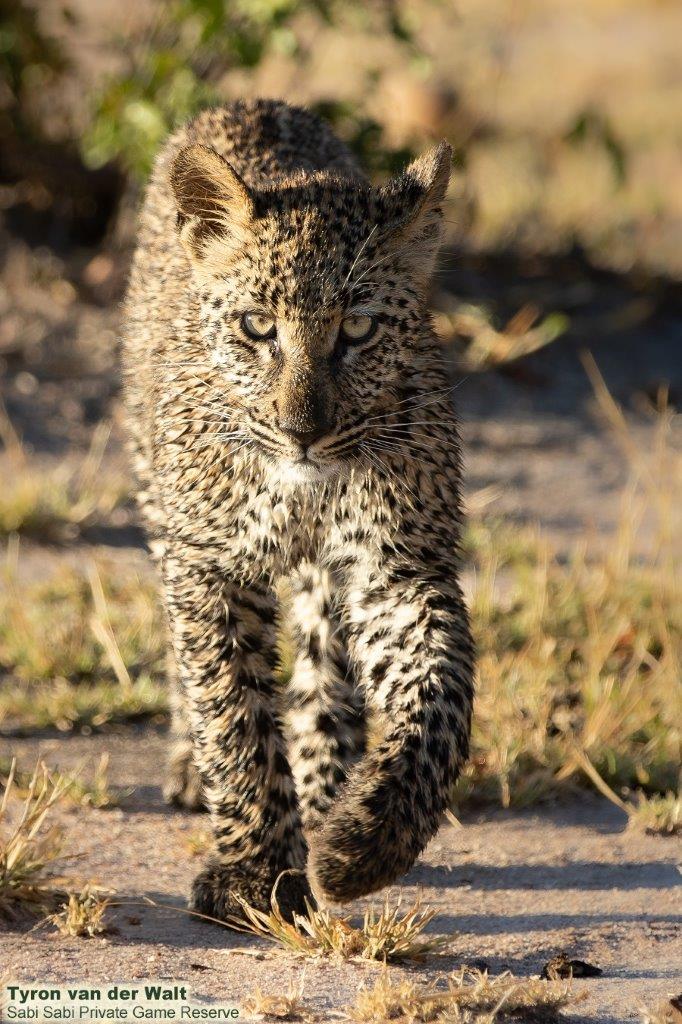 I pulled off the road and let them pass, the cub being a bit curious as it walked past us. After they had walked by, I turned the vehicle around and followed them, but after some time, I was unable to follow them any longer.  I thought to myself, I had searched for hours for this female leopard and I had only got a brief sighting. I’m not ungrateful, but I would’ve loved to watch them for a bit longer. They moved off and I could not see them anymore. We decided to move on, and I drove very slowly up the road hoping for some kind of change in direction from the leopards, but it did not happen. 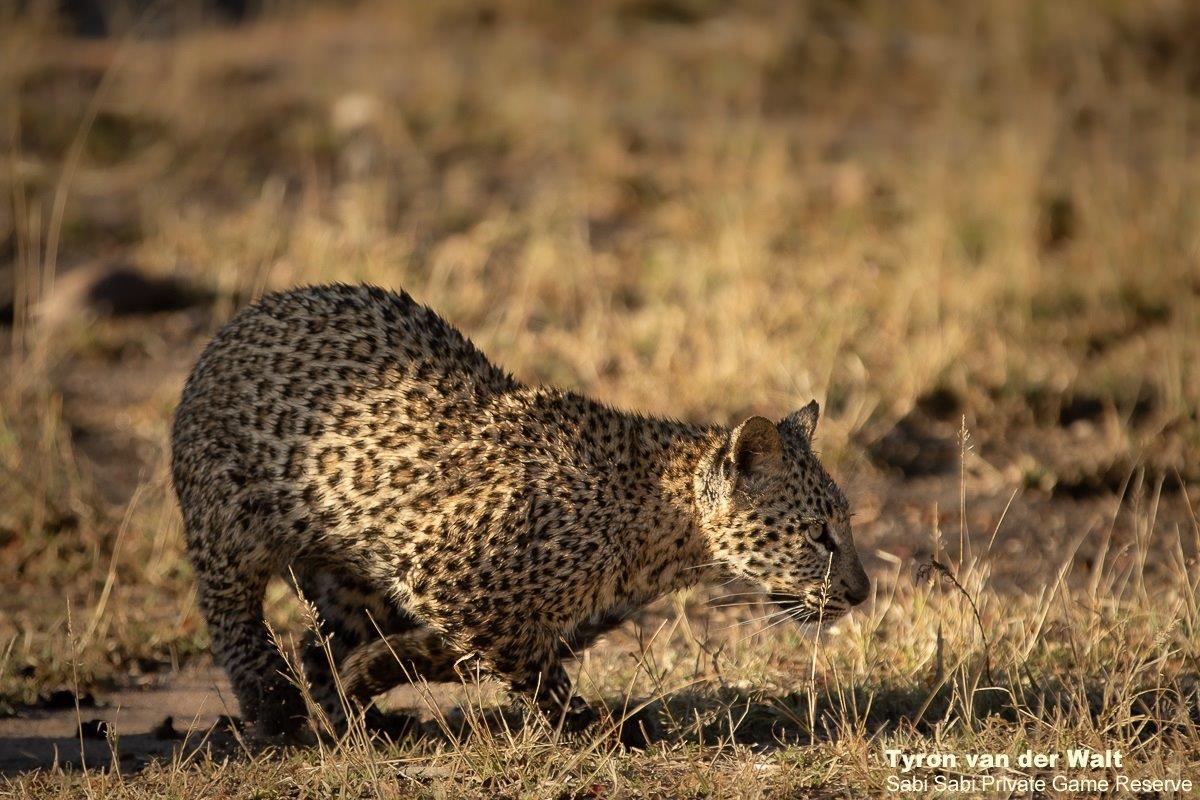 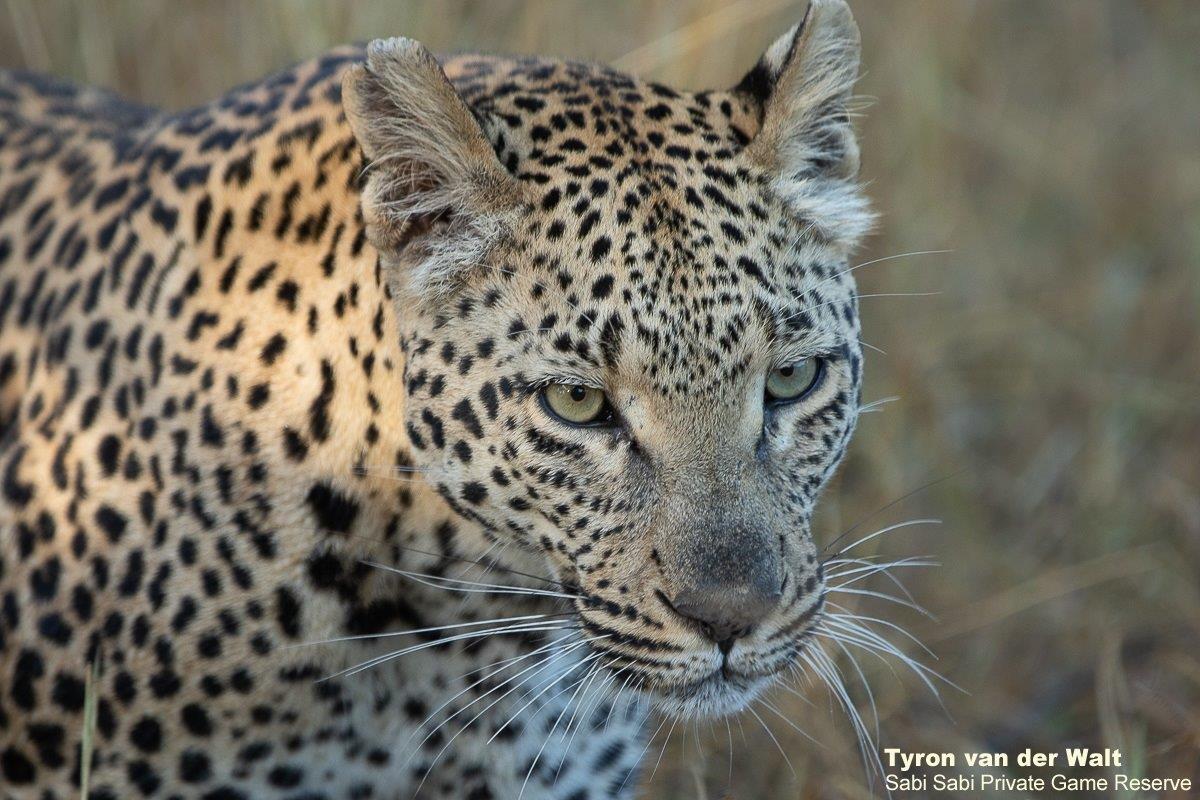 I listened again just for a short time and as I was about to start my vehicle, chaos ensued! All of a sudden there was screeching coming from the direction of where we had last seen the leopards. Continual, deafening screams! Straight away I knew that the mom must have caught a duiker as I have heard that screeching before. I tried to get some kind of view of what was happening, but it was hopeless as they were behind some bushes. It was a horrible feeling as there was action and I could not get there. 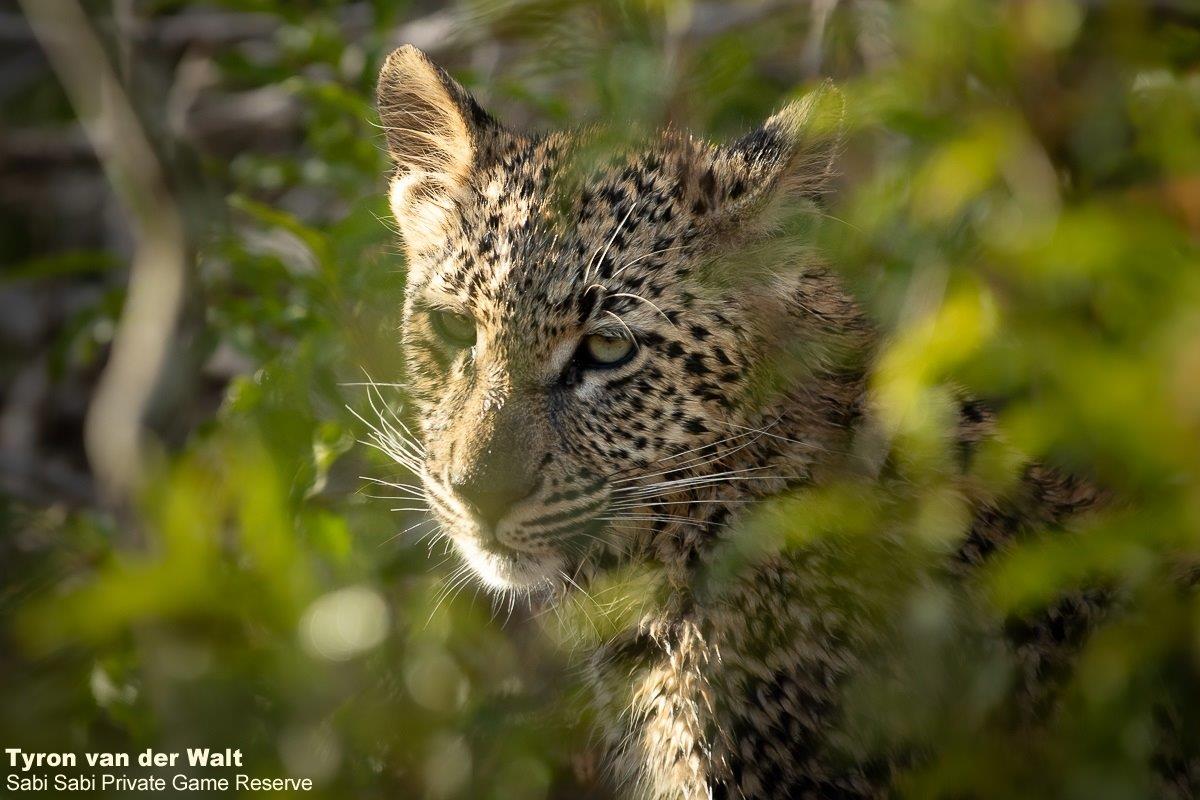 The screeching carried on. We saw the bushes rustling and a flick of tail every now and then. The screaming got closer and closer, and we realised that not only had Ntsumi caught the duiker, but she was now teaching the cub to finish the job. We had quick sightings of the young duiker dashing from bush to bush, but on its heels was the young cub. It was learning how to catch its food! It was now a test, with mom not far behind, watching what was happening and to help if needed. The cub and the duiker darted back and forth, coming closer and then going farther and coming nearer again. The leopard cub would by this time be able to knock down or trip the duiker, but it looked unsure of what to do next. 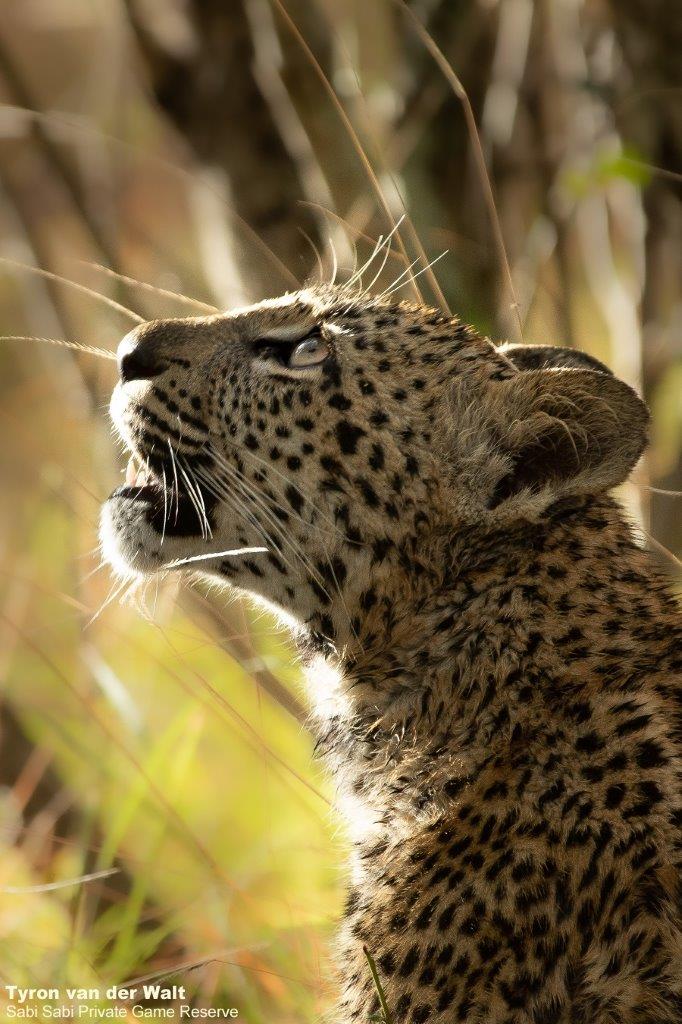 All three of them ran across the road behind us, allowing us to watch from close up. By now the screams from the young duiker had alerted the nearby hyenas that something was going on and they started to run down the road towards us. I looked toward the little leopard cub that was trying its best to catch and suffocate this little duiker, who by this time, must have been exhausted. Cue the leopard cub’s mom, who was nearby watching and listening. She burst into the area where the cub was, grabbed the little duiker and scaled up the nearest tree with the cub in tow. Just as they got high enough, about four hyenas rushed in and stood at the base of that tree looking up at the meal that got away! 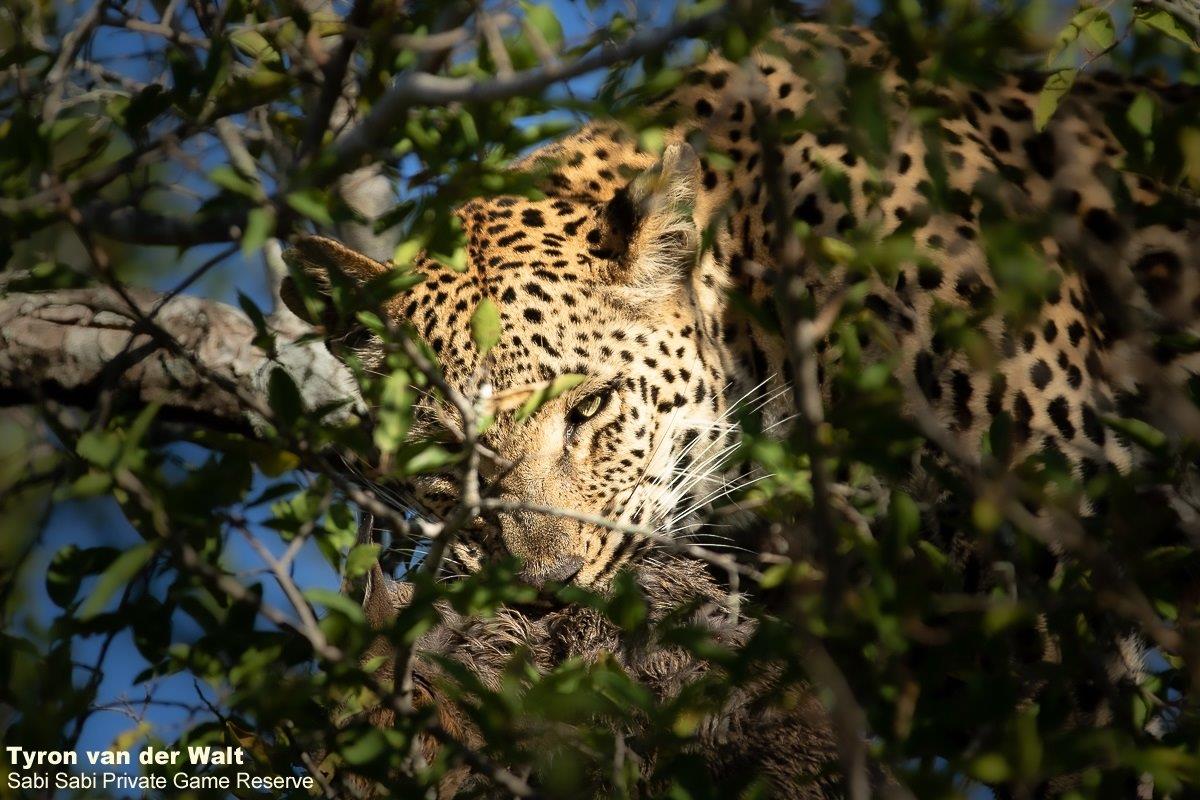 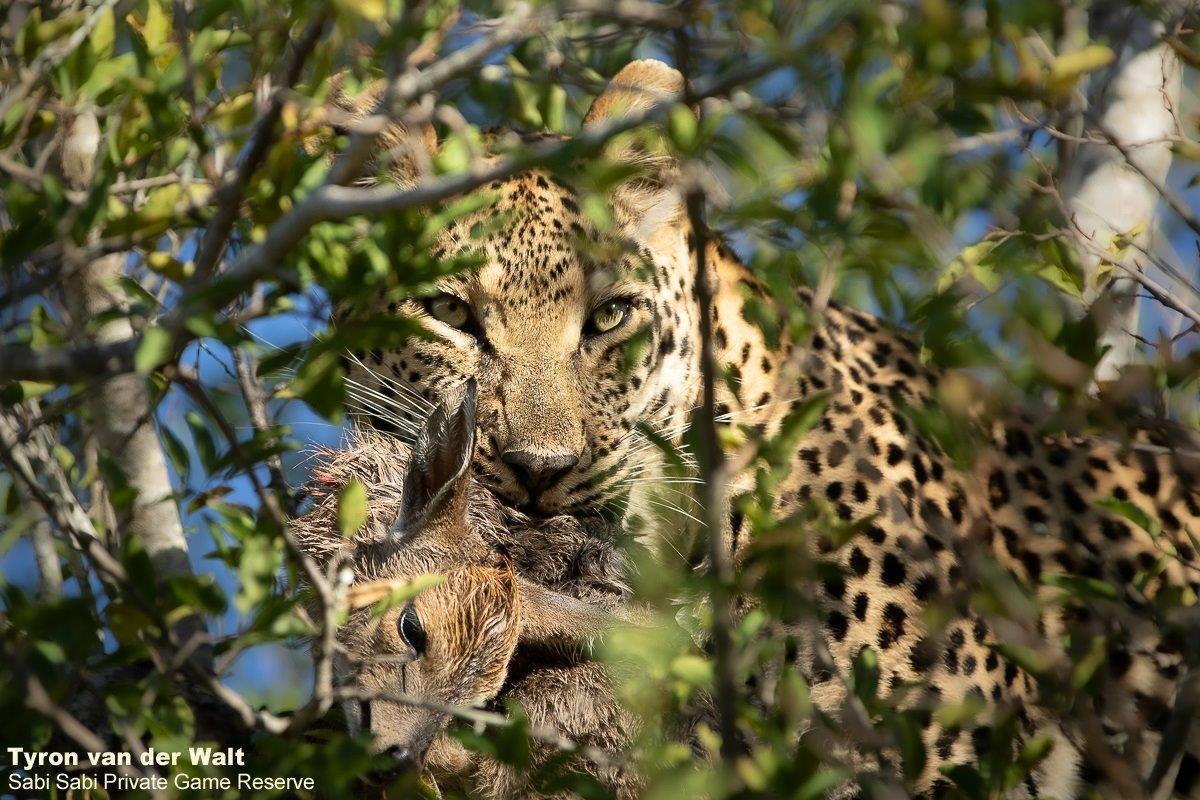 The mother leopard now had the little duiker firmly in her jaws, almost as if to guide the cub on how to do it and at the same time also be aware of their surroundings, especially on a kill and as there was lots of noise. The mother placed the lifeless body firmly in the fork of the branch, looked around and descended from the tree and went to lie down in the shade nearby. The cub, being a little lower in the tree, looked down towards mom and climbed up towards the kill. It sniffed around and then started the process of stripping the fur to get to the meat.

At this moment, it looked to me like the mother had rewarded the cub for its efforts, in letting it eat first. Although the cub still has a lot to learn, it will continue to hone its skills by observing its mother very closely and practicing continually. As the good old saying goes, “practice makes perfect”. With this lesson, I am sure that the cub will get better and better and will learn the tricks of the trade from its mother in order to be successful.