The Yellow-billed Oxpecker (Buphagus africanus) have formed a symbiotic relationship with large mammals and make a highly specialised living by feeding on ticks and other ectoparasites on these mammals. They are well suited to a life on their hosts considering their total dependency on them. The unique physical adaptions include short legs and sharp claws, clinging onto sparse hairs of their hosts.

So at home are these birds that they often sleep on their hosts at night! 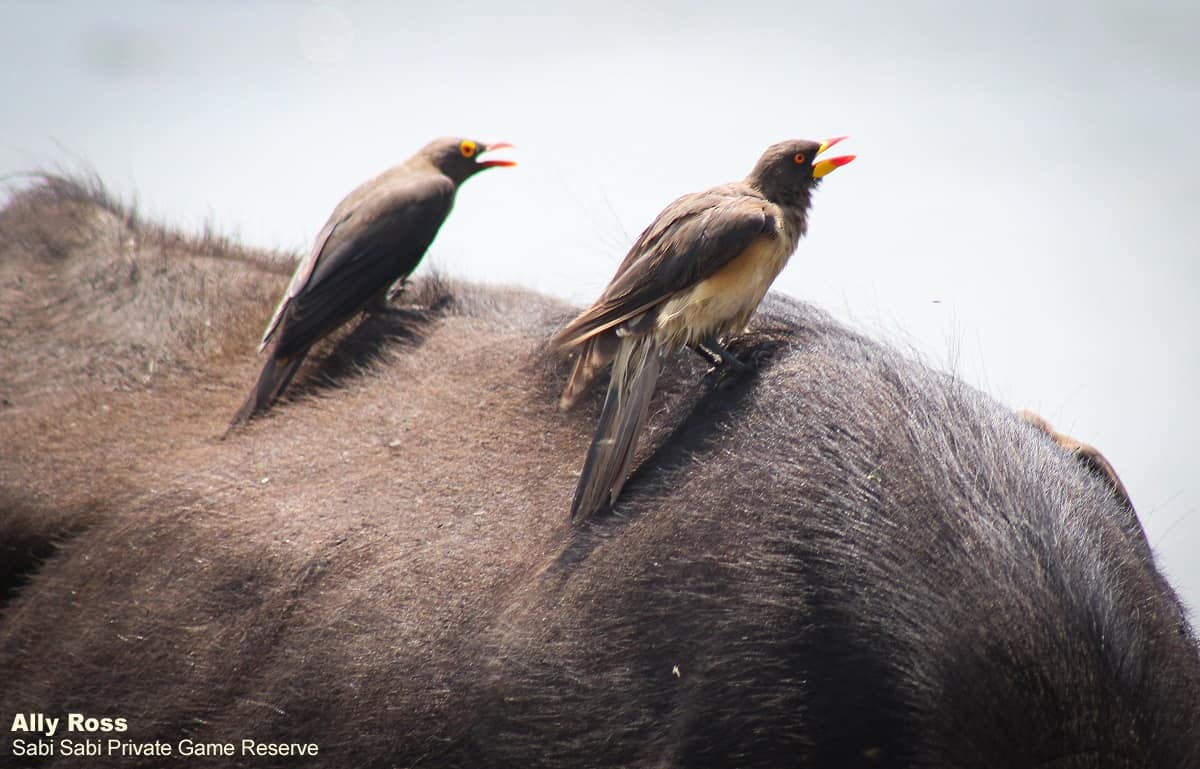 I’m sure many of you may have been wondering what all the hype is regarding the Yellow-billed Oxpecker nest? Well let me tell you, these highly specialised birds with a very narrow ecological niches run the risk of population decline if circumstances change in the slightest. This was witnessed in the 19th Century.

For any bird nerd out there, this little discovery is exceptionally exciting. We may see these birds in and amongst the massive buffalo herds that pass through this area… but to witness a nest site, is a whole new ball game.

By 1915, Yellow-billed Oxpeckers were believed to be extinct as breeding species in the Republic of South Africa. Their decline was due to an increase in hunting pressure on their main mammal symbionts, these animals being their main food source. The species then suffered another drastic decline when the outbreak of Rinderpest, in 1896 decimated the remaining population of buffalo and cattle populations.

The subsequent use of arsenical compounds in cattle dips decimated the remaining populations. Their range then shrank to large game areas in Northern Namibia, Northern Botswana and Western Zimbabwe.

However, sightings of them returning were steadily recorded in the Kruger National Park since 1979 and the first definite indication of breeding in these birds in RSA was then recorded back in January 1984.

For me, it is always interesting to read about, even back then in the 19th Century, how human habitation, hunting and disease had such an impact on the natural world. For those of you who may not be aware, Rinderpest was an infectious viral disease that ripped through cattle, buffalo and other antelope species. It was characterised by fever, oral erosions, necrosis and high mortality rate. Quite fittingly, “Rinderpest” is a German word for “cattle plague”.

As the Rinderpest epidemic simmered to an end in 1897, it took with it many ungulates these birds depended on, in particular the African Buffalo, there was said to be around “a dozen left” (Steven Hamilton 1929).

Present day, 2020, Yellow-billed Oxpeckers are regularly sighted on the now stable and ever-rising population of African Buffalo (Syncerus caffer). These large buffalo herds are more commonly seen in the northern reaches of the Kruger National Park; however, we seem to be blessed with the presences of these herds on the odd occasions.

Sabie Game Reserve is incredibly lucky to witness these mass movements. Buffalo herd up to approximately 200 strong will often spend a few days “migrating” through our reserve in search of food and water.

A few requirements that these special little birds need to be able to tick off are the following:

Conservation Manager Jed Bird discovered an active nest sight in the south of our reserve!! The reason why this is such an incredible discovery is because, to our knowledge, this is the furthest southern breeding site ever recorded and definitely a first for Sabie Game Reserve! 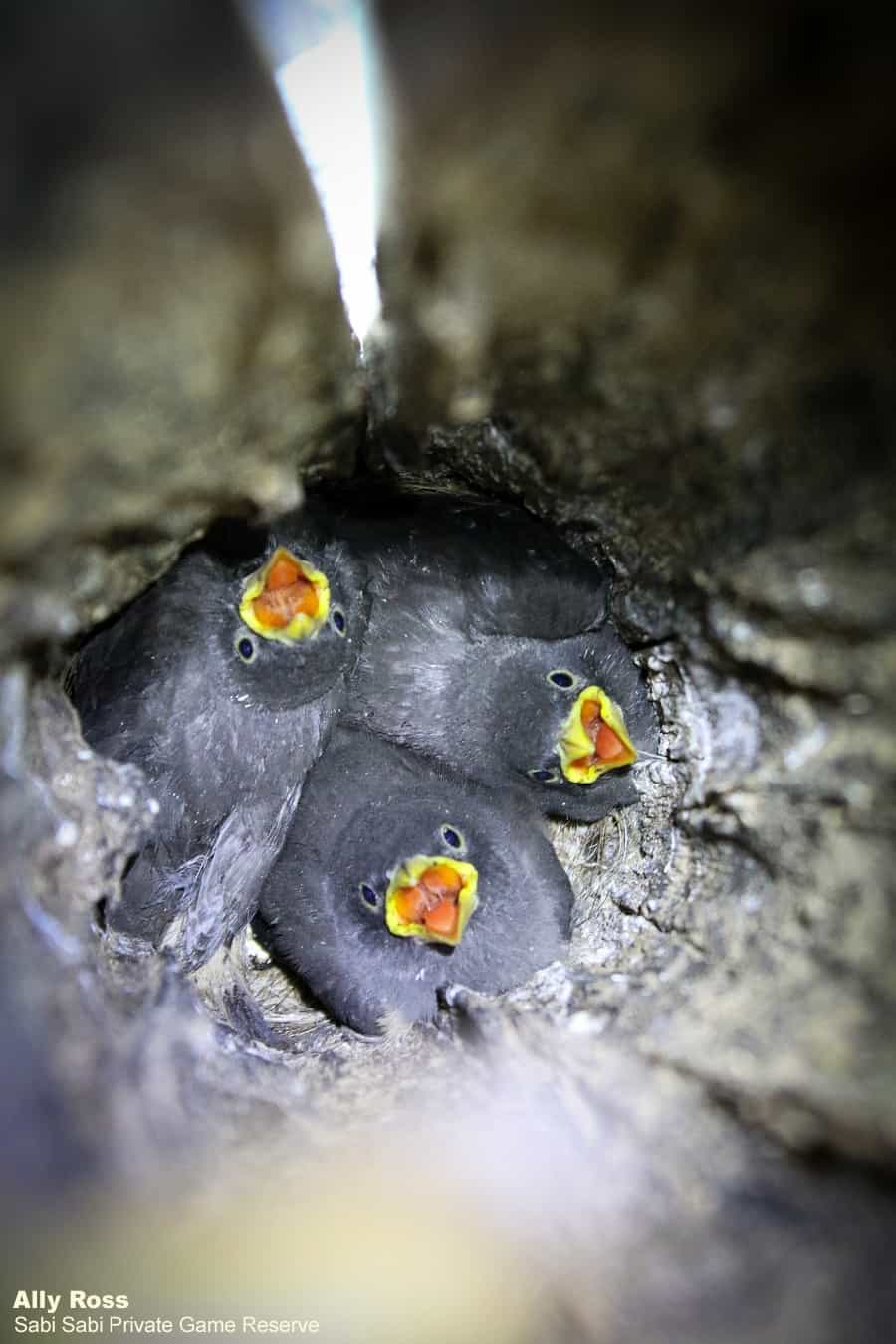 I decided to reach out to fellow birder, Guy Hausler, who has spent many years compiling monitory work on the Oxpeckers, in particular the Yellow-billed. Guy is studying the nesting ecology, carrying out distribution studies as well as the ecological niche of the Yellow-billed Oxpeckers. For the last three years he has studied their habits and movements and heading up this project in South Africa, so believe me when I say he was just as excited as I was to hear there is a nest this far south!

The furthest south Guy has recorded an active nest is Talamati, Kruger National Park. Which, to put in perspective is just short of 100km by road from of Sabie Game Reserve. He provided us with some great information regarding their nesting behaviour. This has allowed me to now watch them with a better understanding.

Yellow-billed Oxpeckers start the construction of their nest with a fair amount of course fiber, such as dried out elephant dung. Once the initial structure is in place, they then line the nest with the softest fur found on their hosts, this may even be from the belly or neck hair of a Kudu (Tragelaphus strepsiceros). With this they design the most perfect little cup nest to comfortably support the babies. 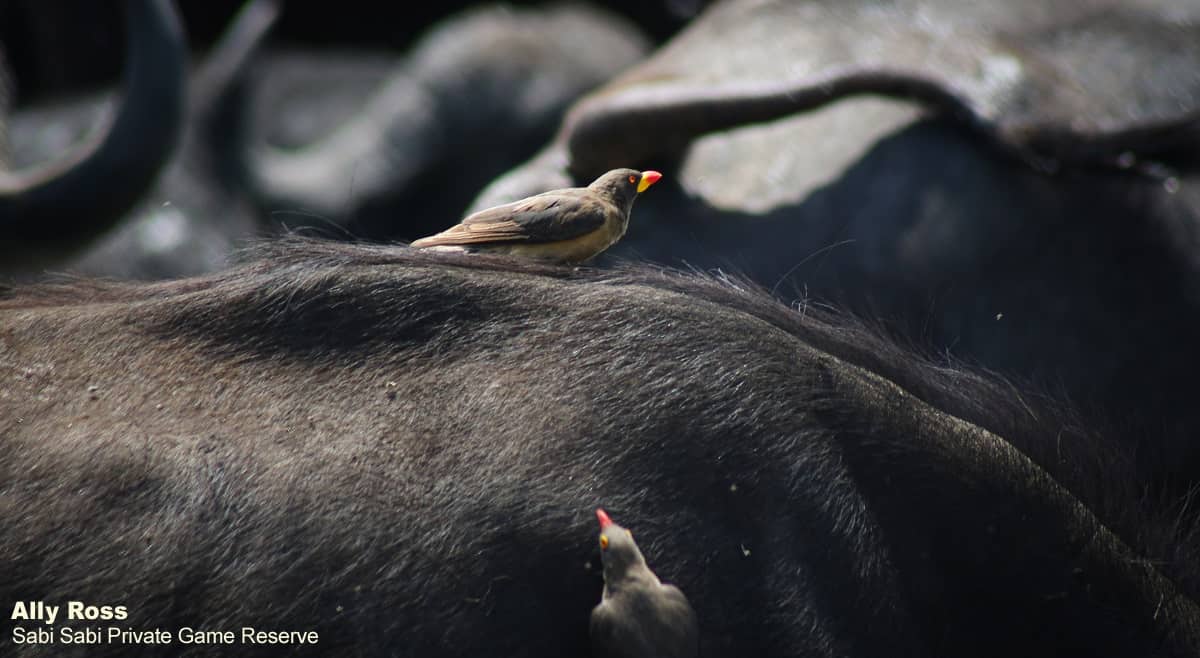 These little birds are even smart enough to construct their nest away from prevailing weather, such as rain and wind.

Currently the family structure at the nest is made up of two adults and two sub-adults, probably prior offspring, who are helping take care of the three new little additions. They will work tirelessly every day to bring back enough food to feed the chicks. With a short period of 25 days, the family has a fair amount of work to do to ensure the fledging of these chicks are successful. 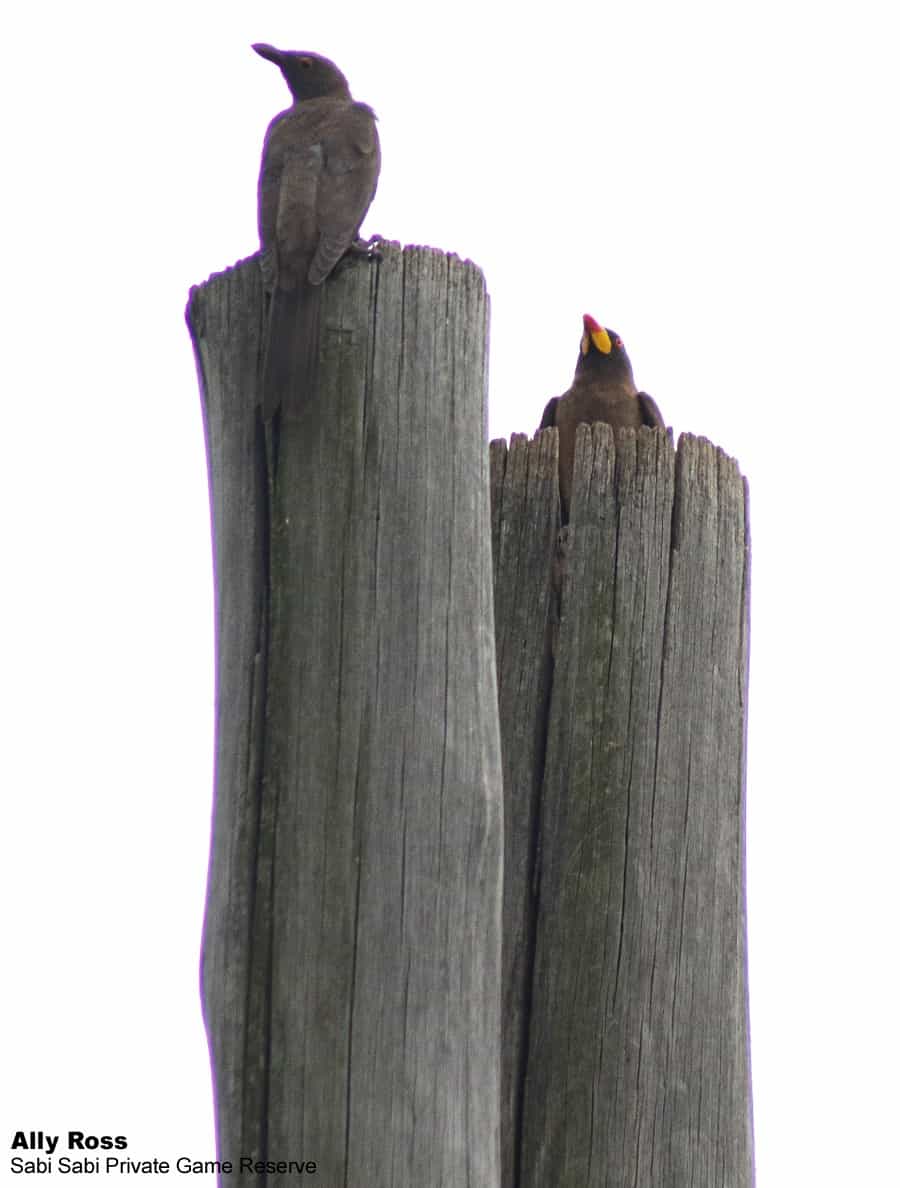 Over the next little while I will have the opportunity to note what food they bring to the nest, what time they bring it through, and which individuals are bringing it. As well as enjoy the process of these awesome birds’ success!