As I was getting ready for the arrival of my new guests, a message was sent out to all the rangers that one of our rangers, Michell, had found the wild dogs on a double impala kill! When she arrived, after following the mass of vultures that were falling from the sky hoping to get a bit of the meat that was going around, she found the dogs lazing in the shade of a tree unperturbed by the vultures that were now finishing off what remained of the impala. They were about to burst at the seams and had left a large piece of the impala for the vultures, as they didn’t have any more space in their stuffed tummies. When we found them in the afternoon with my new guests they were sleeping exactly where Michell had seen them. 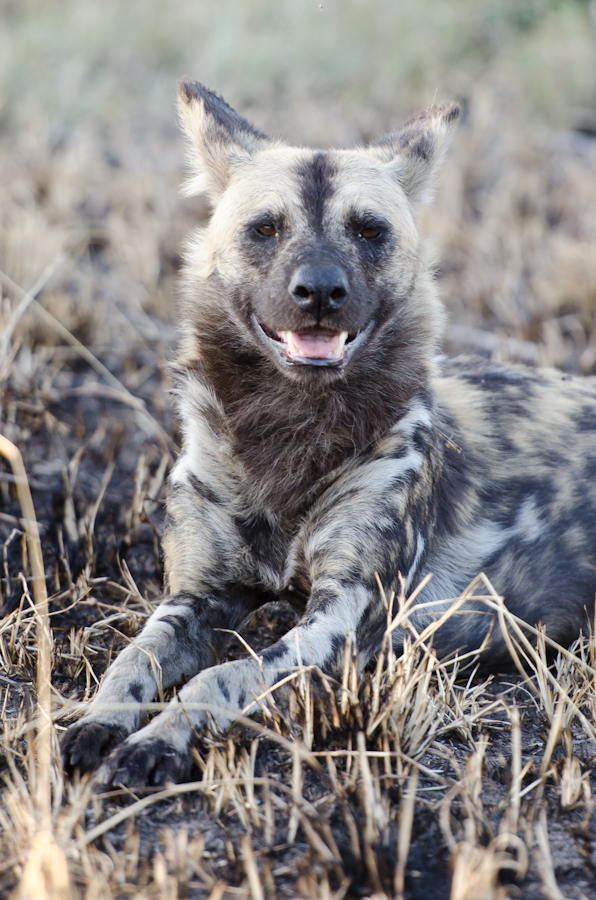 We sat and watched the dogs sleeping off their meal as the vultures and eagles still flew overhead hoping to pick up some more scraps from the dogs’ excessive eating habits. A pack this size, which is 7 dogs, can eat anything up to 3 impala in a day to keep up with their high rate of movement. These dogs can move up to 50km on a cool day and therefore require major energy input to sustain them.

The next morning we were blessed with an amazing sunrise that showered the most amazing golden light over the bush. As we were trying to capture the moment and the colours on our cameras my tracker, Solly, spotted 3 rhinos sleeping next to a pan.

We watched them as they started to wake from their slumber while the sun climbed higher into the sky and while all of this was happening a big bull elephant decided to join the scene. We watched as he sussed out the rhinos and our vehicle to see if it was safe for him to approach and then decided against it and made his way away.

The rest of the morning was spent enjoying the smaller things as we discussed giant land snails, the different trees and their role in the bush and in traditional medicine and watched a herd of impala playing. The youngsters were in full sprint, stretching their legs and strengthening themselves. What an amazing day!