Traditional healing has a centuries long history in Africa. For eons before the advent of modern medicine, extremely skilled and knowledgeable indigenous healers developed cures for a myriad of illnesses, using the trees, plants and shrubs which grew in their vicinity. And even though it is now simple to buy western medications in most urban areas, many African people, including some of Sabi Sabi’s Shangaan staff, still prefer to visit the local sangoma or turn to nature for a homemade herbal cure. The Sabi Sabi Reserve is filled with trees, plants and shrubs which have proven medicinal value.

A good example is the Jackalberry tree, a beautiful tree from the ebony family. It has uses which are at the same time mythological, medicinal and nutritional. The lemon-like fruit is edible and tasty, and is sometimes ground into flour or used to make home-brewed beer. However, tribal belief dictates that the fruit should only be eaten when at home – eating it when away will allow evil spirits to possess the soul. The tree has a high level of tannin in the bark, roots and leaves; this is very effective as a styptic to stop bleeding. A decoction made from the scraped roots is believed to cure leprosy and get rid of internal parasites. Peeled roots of the tree are rubbed onto the skin to get rid of ringworm, and a handful of bark and twigs boiled in water creates a drink to bring down fever. 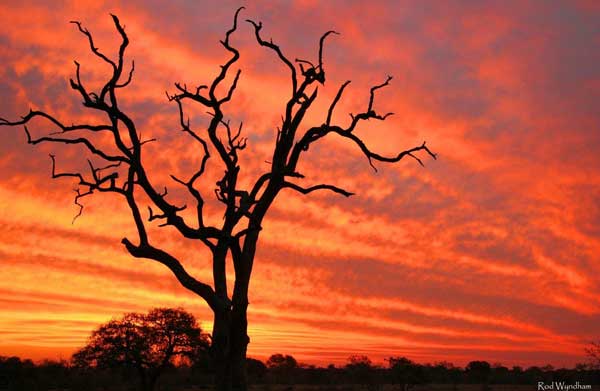 Another commonly found tree with a myriad of medicinal uses is the Weeping Wattle. There are several ways to use the roots, leaves and bark. To cure a sore throat, simply chop up 10cm of roots, boil them in a cup of water for half an hour, add a handful of leaves and boil for another five minutes. Strain, cool and gargle the infused water; and say goodbye to sore scratchy throats. Powdered, ground roots of the tree will help wounds heal quickly. An infusion of the roots will cure stomach-ache, while chewing a piece of the bark will lessen colic pain. Boiling the leaves of the tree and inhaling the steam can provide some relief from toothache.

There are Leadwood trees at Sabi Sabi which are over a thousand years old. This is a protected species, with heavy, impermeable wood. The skeletons of dead Leadwoods can be seen dotted around the reserve, their wood too hard for termites to destroy. Because of their protected status, Leadwoods cannot be harvested for medicinal purposes – even cutting down branches will attract a hefty fine. However, elephants don’t obey “protected species” rules, and often break off branches, leaving the remains on the ground after they have had their fill of Leadwood leaves – and these pieces of wood can be used. Inhaling the smoke from the burning wood of a Leadwood tree is an ancient remedy for curing coughs and colds. The smoke from burning Leadwood leaves is also thought to offer a similar, although maybe not as potent cure, as is an infusion made from the flowers. Leadwood bark is used as a treatment for bilharzia.

The Shangaan people who make up the majority of our employees still use many of the ancient herbal remedies today, in preference to present day cures. During safaris, guides and trackers will identify and explain in depth the age old uses of these traditionally used plants, some of which are already being studied scientifically with the aim of incorporating them into the manufacture of modern medicines.

* Please note that the references made to bush medicine herein are tribal and cultural beliefs and not proven medicinal facts.