Spring brings with it the start of our rainy season and wherever you look there is new life, a time of plenty for all. From plants to insects, herbivores to carnivores Jacana took full advantage of a vulnerable newborn warthog late in the afternoon which she hoisted high into the branches of a Marula tree, providing her with a good meal.

Not too long into the safari, Golonyi was found busy stalking impala. We kept an eye on her, following her from a distance, trying not to disturb the hunt. But she changed direction, leaving the impala behind. She quickly stopped on a termite mound before she continued her search. She used the thick bushes as cover, and we could see how her body posture changed when she spotted her next victim. We lost sight of her but kept an eye on the area we last saw her. All of a sudden we heard an alarm call from a bushbuck and saw Golonyi sprinting in the bushbuck’s direction. Unfortunately, nothing came of the hunt, and she moved deeper into the bush.

We followed up on a lot of vultures that were landing close to Selati Camp as we were making our way back from our morning safari. It was difficult to locate exactly where they were due to the sheer number of them already in the trees, covering quite a large area. We eventually found an impala carcass that the vultures were feeding on before a female leopard snatched it away and tried to hoist the remains up a tree multiple times without success.

Even leopards do scavenge sometimes and do not always hunt their meals but if they find an opportunity to scavenge, they will. By the look of the carcass, it did not look like a leopard had made the kill. Pieces of bones and ribs were all cleaned of flesh with only skin left. We all hoped she would hoist the carcass, but it had entangled around small bushes that made it nearly impossible for her.

We found Ntsumi female leopard weaving through bushwillow thickets, which made it a bit problematic to keep up with. She eventually decided to rest in a Marula tree. After that, she moved on to a nearby watering hole and had a brief drink.

Being a hot morning, impalas tend to use thickets like these for shade and cover. She could possibly have been on the hunt as she was scanning around while resting in the tree. This female is always easy to identify because of the tear in her right ear.

There is something magical about spending time with a wild leopard. Just watching them sleek through thickets in search of a meal. There is always a method and plan in place. We spent a long time just observing Ntsumi go about her daily ritual. She would stride effortlessly through a Tamboti thicket, she then scent marks on prominent bushes leaving signals for other leopards to know her whereabouts. She climbs a termite mound and spots a herd of impala close to a waterhole. She approached cautiously until a squirrel alarm call gave away her presence.  The impala are now aware of her presence. She has a drink of water and starts the process over again. It is a privilege to watch her go about her daily routine, truly wild and free. 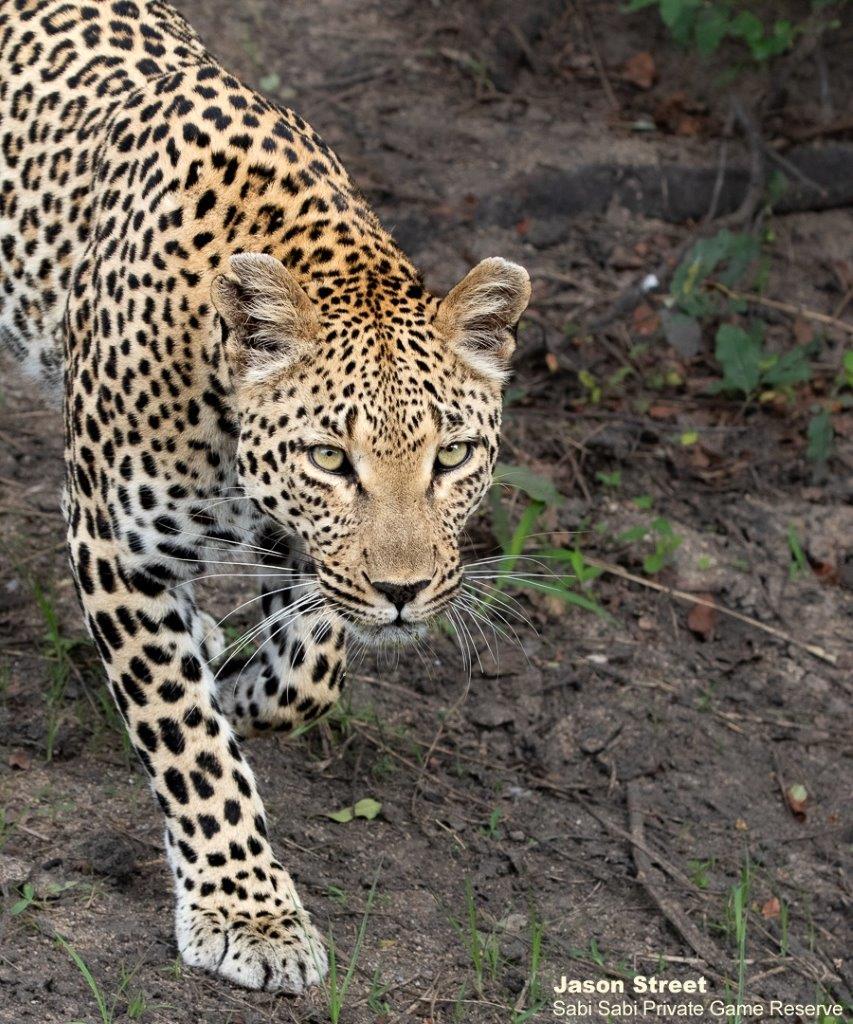 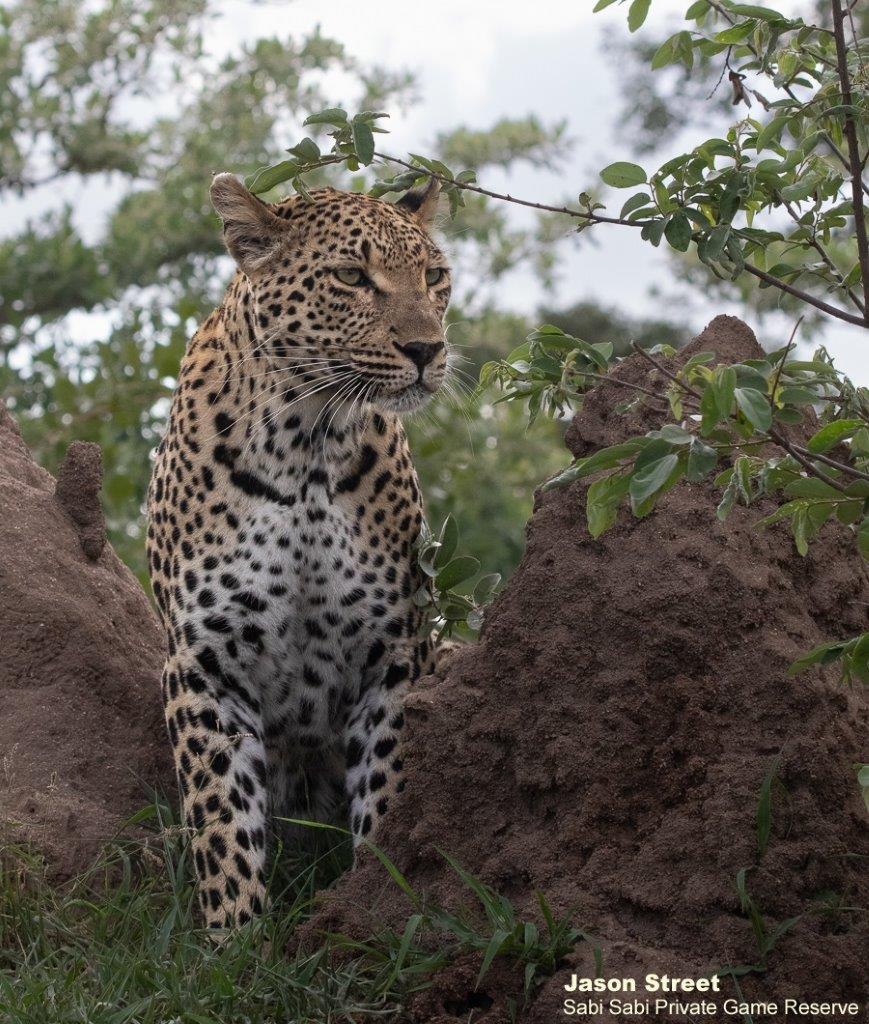 We found Ntsumi’s male cub drinking water at one of the water sources over the weekend. He then settled down under a thicket hiding away from any danger that might be close by. Staying in the area he will wait for his mom to return from her hunt, calling him to a potential meal.

Female leopards will often leave their cubs somewhere while they go out hunting. They can be split up for periods as long as three to six days. Older cubs, between the ages of 8 – 12 months, can hunt small things on their own, and will sometimes join their moms on hunts to learn from them.

Just a few meters away from Bush Lodge, one of our trackers had a quick glimpse of wild dogs. Waiting for them to get closer to the road, suddenly, a big pack of wild dogs appeared on the road. They had just made an impala kill as some of the pups still held on to the legs of the impala. Fighting over who gets to carry the remains, the pups played on the side of the road while the adults relaxed in the shade keeping an eye out for any other predators. A hyena appeared on the scene, coming too close for comfort, and got chased away by a few of the adult wild dogs. With the rain we had over the past couple of days, some mud puddles are still filled with water, so the wild dogs took advantage of one of these puddles to quench their thirst from their kill and started to settle down in the shade.

Wild dogs are most active during early mornings, as soon as it is light enough to locate prey and late afternoons in the last bit of sunlight. During the hottest time of the day, they will rest in the shade, but will rarely let an opportunity to hunt pass them by. 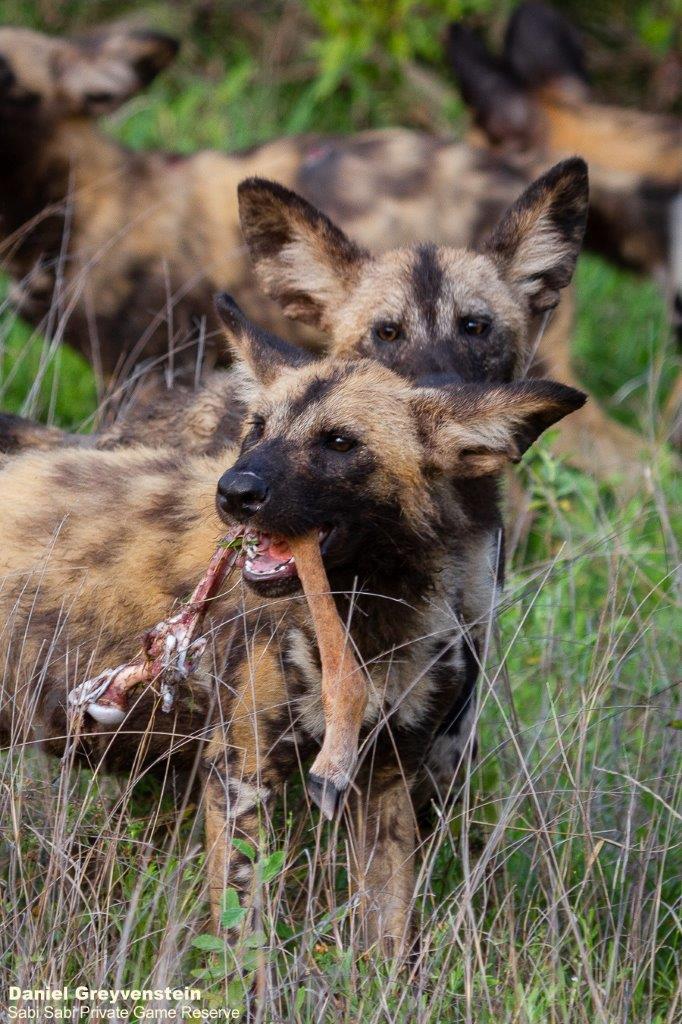 Two cheetah cubs, along with their mom, provided amazing sightings this weekend. You could hear the excitement on the radio when the cheetah mom and her two cubs were found. The conservation status of cheetahs varies from vulnerable to critically endangered, so seeing three of them together is extremely special.

Cheetah cubs will stay with their mom until they are about 18 months. They learn how to catch prey at the age of 6-12 months, but still rely on mom for hunting most of the food. By the age of 12 months, they will help their mom with hunts. 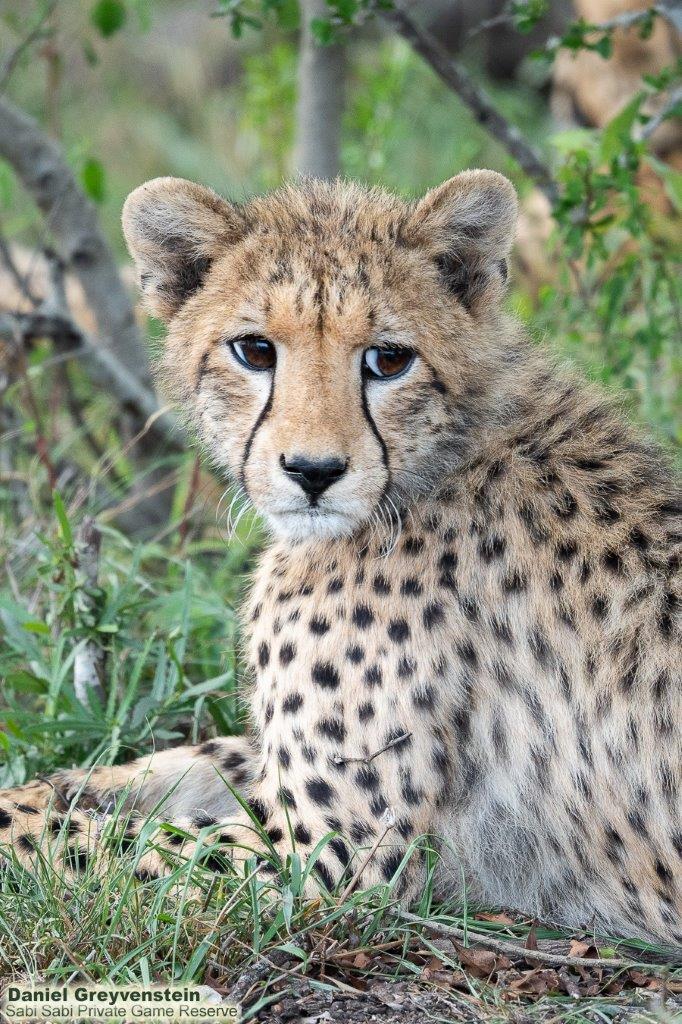 We followed up on the sounds of hyena and lions close to Selati Camp and as we had anticipated, a pride of lions was at it again. They managed to kill a young zebra and hyenas were trying to get their share. The meal was not enough for everyone, and the lions moved off and left only a few bones for the hyenas to fight over.

This pride has been doing well in terms of hunting and providing for the young ones. In the space of a week, they have managed to successfully make three kills. Not only are they feeding themselves but the other predators like hyenas are benefiting from their hunting. It is vital for the lionesses to teach their sub-adult cubs to hunt and so far, they are joining in the hunts and making kills with the adults which is wonderful to see!

We followed up on the Kambula Pride of lions from where they were found the previous morning but could not find them. We decided to do one last walk to see if we could pick up on tracks and there they were – lying in thick bushes, possibly watching us all this time as we drove around looking for them!

This pride has been frequenting the western parts of our reserve following the same path and we believe they are looking to extend their territory into that of other prides in the area. The male lions with this pride are looking to mate with females as they appear to be coming into oestrus and follow them closely every time they move. 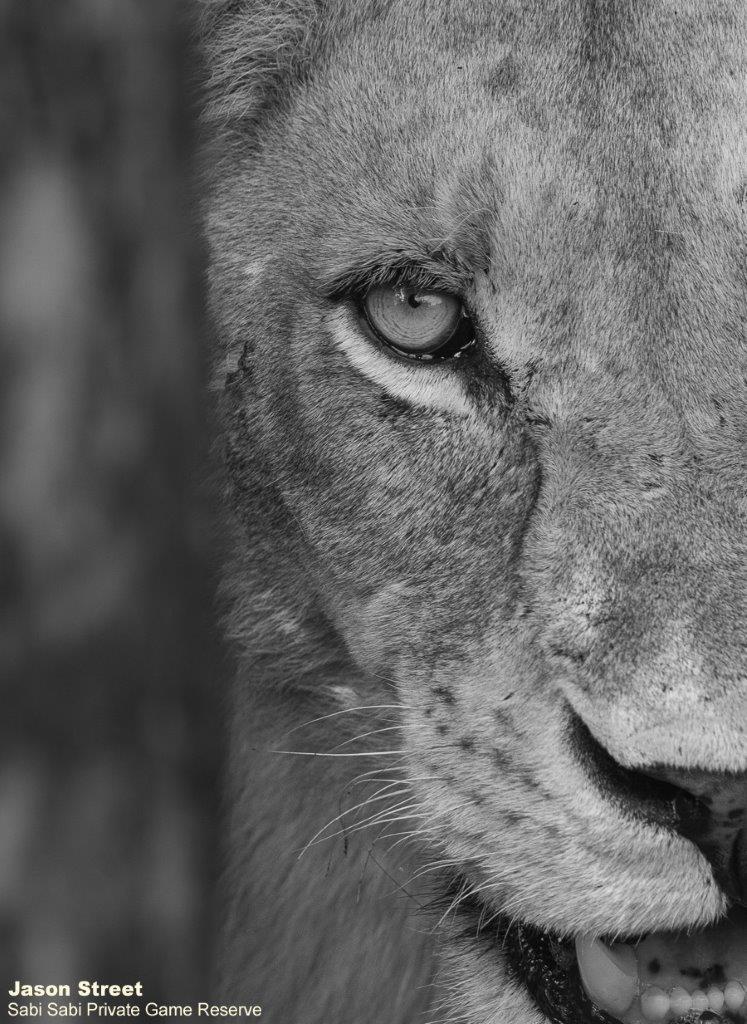 We set out with one goal, to find a male lion. This was our guests’ last wish before they return to reality. Looking for the smallest sign or track, we kept our eyes open, focusing on the bush. Then there it was. A fresh set of tracks of a male and female lion. You could feel the excitement in the vehicle. Now even more focused as we moved slowly through the bush, we could feel that we are getting closer. And then there he was. A big male lion, sleeping peacefully in the sun. We couldn’t see the female anywhere but heard impala calling in the distance presuming it might be the female out on a hunt. As the impala alarm called, he lifted his head, looking into the direction of the sound, but didn’t move too much. Later, he got up, walked a few meters, stretched, and plopped down into some shade again.

It is a nice cloudy morning, and everyone is excited for the day, curious of what the safari might hold for us. We were surprised by this first sighting of the day as we found 8 piglets with three warthog moms! The piglets stayed close to the moms, but once they got used to the vehicle, they came closer inspecting us before dashing to their moms again.

Litters can consist of 8 piglets, but on average a female will have two to three piglets. A female with her litter can join up with other females and their piglets to share water sources and food. Although the female will stay with her piglets and burrow with them at night time.

With the seasons changing and a lot of our migratory birds making their way back for our summer months, the most distinguished name that is on everyone’s minds must be the Woodland Kingfisher. With the iconic call that just screams Africa over the open Savannah, we all awaited the arrival of these magnificent birds, and now they’re back!

With electric blue feathers covering its back and underwings; and the cleanest white covering the breast area, we found the beautiful bird singing its heart out at the top of a dead tree. Coenraad almost jumped up in excitement explaining to his guests that this is the first one for the season and that they have returned.

The golden hour did not disappoint. As we watched hippos playing and yawning in the water, a group of 8 male waterbuck made their way to the water. They stopped for a brief second, allowing us to admire their beautiful horns.

Being extremely water-dependent, you can find waterbuck around river systems, vlei areas and other big water sources. They are grazers, favouring wide open areas with medium to tall grass to feed on. 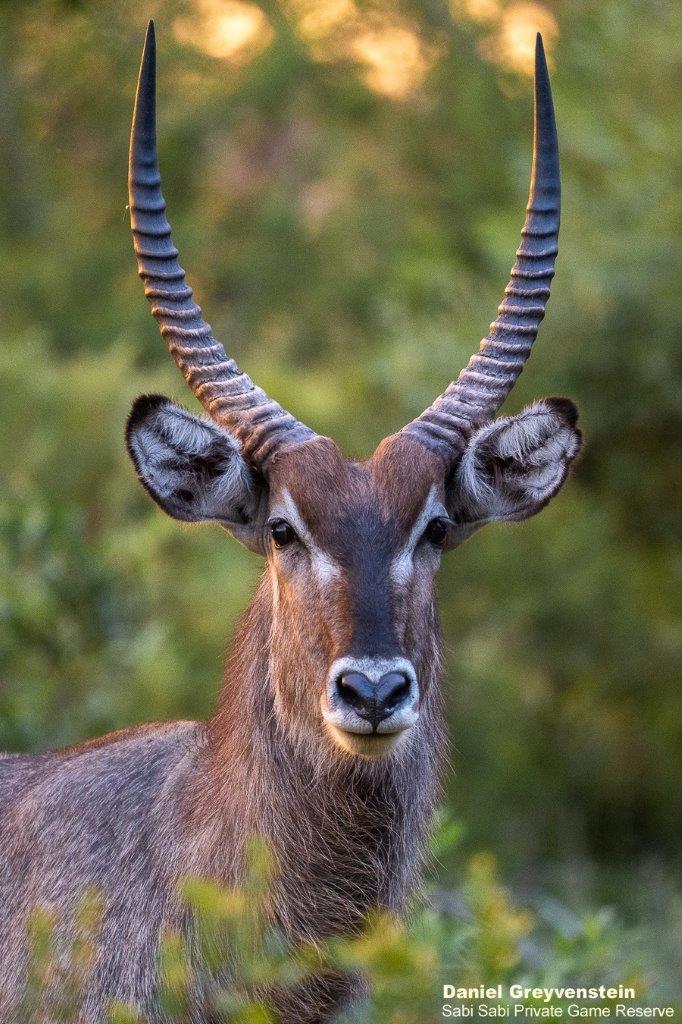 The Flap-necked Chameleon is the only species of Chameleon found at Sabi Sabi. They have specially fused opposable toes that help them grip securely onto branches while climbing and in this case, while sleeping.