The dynamics of lion prides at Sabi Sabi has been very interesting for the past few years. The area was left vacant for a while without any dominant males taking over the territory, however, the N’waswishaka males, as they a known in this area, filled the gap and settled comfortably in the area and beyond. Their success came shortly after they claimed the territory and started mating with the Styx females and as a result, 7 cubs so far have been seen with the pride. Early Thursday morning, we set on a trail to follow lion tracks not far away from Little Bush Camp and we found three sub adult male lions and one female, known as the Othawa Breakaways, as they were just making a kill of a buffalo bull. They were successful in bringing the buffalo down – a great triumph for them, but in my eyes, I saw trouble lingering. These young lions, after being chased away from their original pride, started living a nomadic life – a very silent life in that they don’t vocalise or let their presence be known. Killing a big buffalo bull in N’waswishaka territory was a grave mistake. We watched them feed the whole morning, but they were not settled as they could eat fast and restlessly. Vultures started landing and the lions knew that this could in turn alert any other predators in the area. They would eat and leave their kill unattended for some time and return. Midday, as I was watching the Othawa males feed, they looked up and started running in different directions, but I could not see anything. Only after a while, one of the N’waswishaka males arrived, already salivating and went on to chase the young lions for a short distance.  He claimed the carcass and fed undisturbed. It was not long before the two youngest of the Othawa Breakaways, a male and a female, came back to claim the kill. Normally in a situation like this, it could be a death wish but to my surprise, the N’waswishaka male only showed aggressiveness once and he let the female feed, but not the younger male. As time passed by, the three started to feed together – a phenomenon that I never anticipated.  A blessing in disguise or the beginning of another pride? 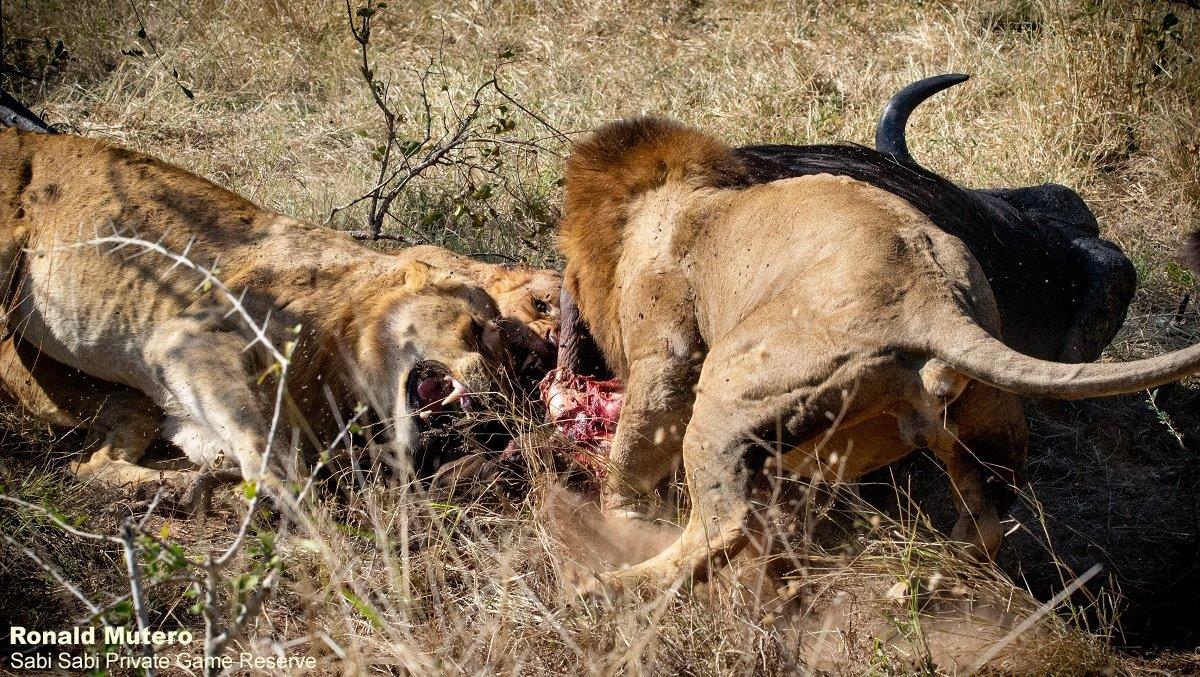 This union was short-lived as the other three N’waswishaka males arrived. They wasted no time and sent the two sub adults packing. They did not want to leave without a fight, but they were outnumbered and left, not to be seen around the carcass again. The following morning, we found the older Othawa Breakaways together, looking quite nervous and terrified, while looking for the other two, but we never saw the reunion. The N’waswishaka males would never take intruders lightly, nor the Styx females, as they want to protect their cubs although it seems the Othawa’s escaped unharmed. Perhaps this was just a warning to the intruders never to return again, or would they one day be allowed to settle in…