An early start to a summer safari is probably, in my opinion, one of the best experiences one can have.  The air is crisp and fresh; the light is gentle and up-lifting. The songbirds greet you with melodies so sweet as they reaffirm the start of your day.  As I drive through the Eastern sector of our reserve, I allow for the sound of the bush and the fresh air to kick start my morning.

The sound of birds enforces a human’s innate connection with nature, allowing us to relax. They say that the instinctive familiarity with bird songs play a subconscious role in our stress recovery, and with the unprecedented times we are facing, we could all do with a little dawn chorus from time to time.

Our morning drive takes us to a sighting of a beautiful and well-known leopardess in the East of the reserve, Ntsumi. With anticipation, we pull in to find her resting in a Weeping Boer-Bean tree. Her beautifully dappled coat well camouflaged by the wavy gloss of dark green leaves. And in true style of most leopard sightings you “hurry up and wait”; wait for the magic we know these beautiful animals create.

Morning chatter and banter continues as we commend the leopard on her expert skills at making awkward positions seem so comfortable in tree top branches. She moves and repositions as she grooms herself.

As we decided to reposition, in the event of her making her way down, we a saw impala gathered at the edge of the Tamboti thicket on the far end of the open area. Eyes straining through binoculars, we noticed a male impala laying in a heap on the ground. Vultures started to swoop in, one by one engulfing the carcass.

The female leopard resting in the tree seemed to have not yet noticed the feeding frenzy happening behind her.

We decided that our best move at this stage would be to go and position ourselves at the opposite side of the vultures feeding on the impala, in the event of her making a hasty approach.

Our luck paid off because after a few moments, marvelling over the speed at which vultures feed, she came CAT-apulting onto the scene with the intention of securing this meal for herself. In a flurry of feathers, the vultures fled the carcass, leaving the leopardess snarling and panting over her stolen prize.

She scanned the open area anxiously in search of rival predators but before she could enjoy the moment to herself, an unwelcome visitor, alerted by the chaos erupting into the open skies above, made his way to cash in on an easy meal. 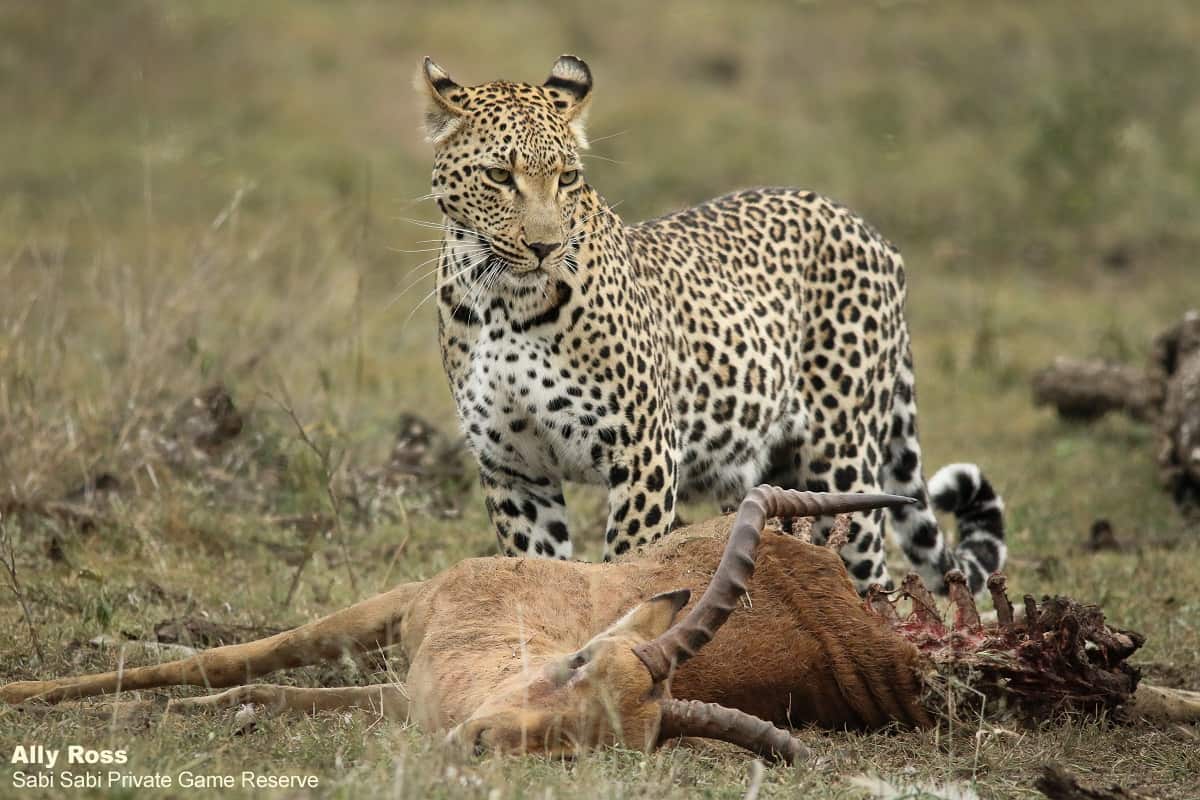 The sight of a hyena caused her to momentarily panic and flee, however, she had no intention of giving up. The hyena wolfed down pieces of impala in a frenzy, he too, constantly checking for lurking rivals. The leopardess quietly groomed herself in the thickets, waiting for a moment of opportunity. 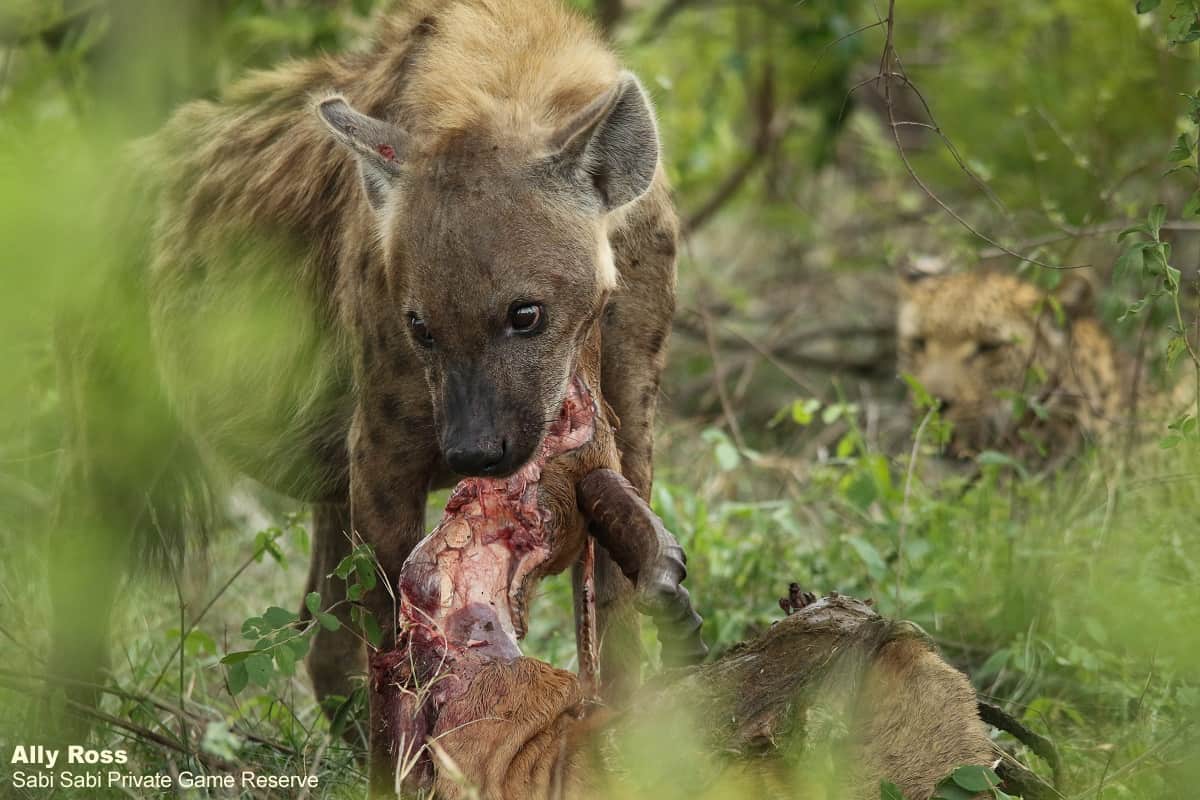 Every so often, as the hyena paused to listen for any potential intruders, she took the chance to creep in closer, desperate to steal a small bit of the carcass back. She took every chance she could to climb into the hyena, with outstretched paws swatting at his head and face. We marvelled at the tenacity of this hyena against the persistent onslaught of its hungry adversary desperate to reclaim her meal. 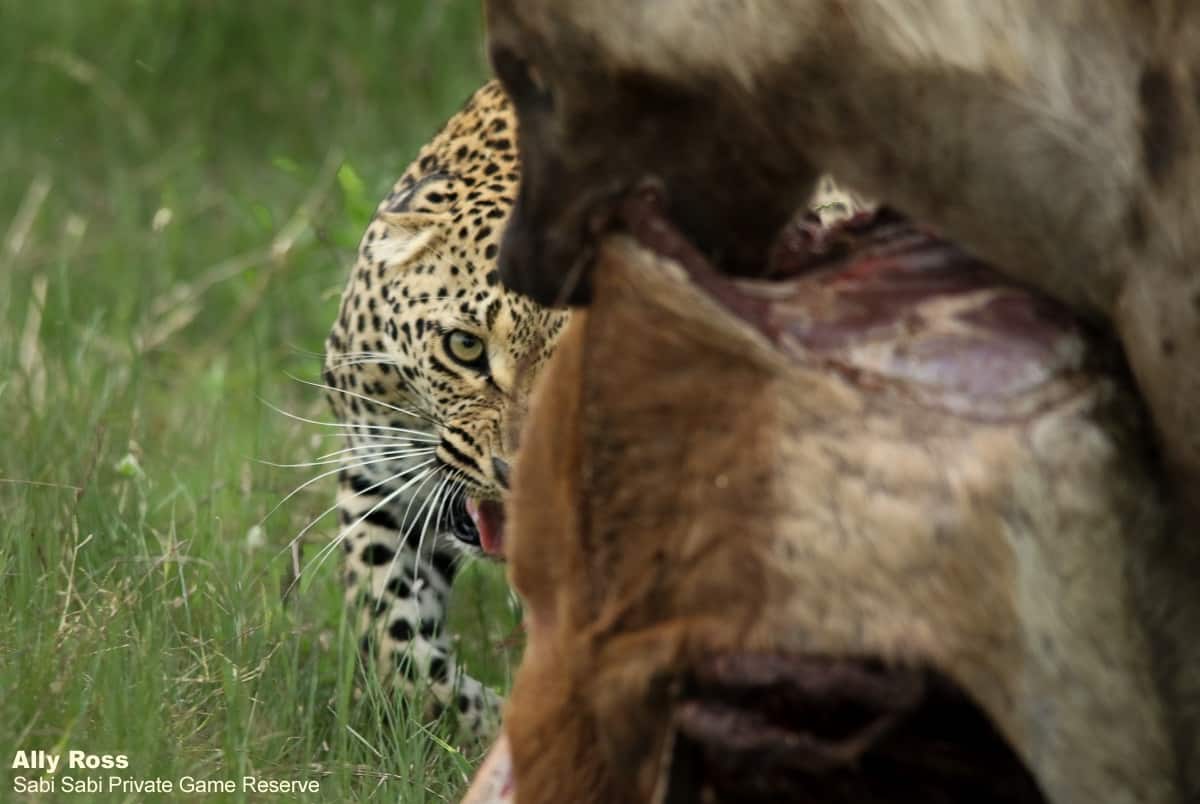 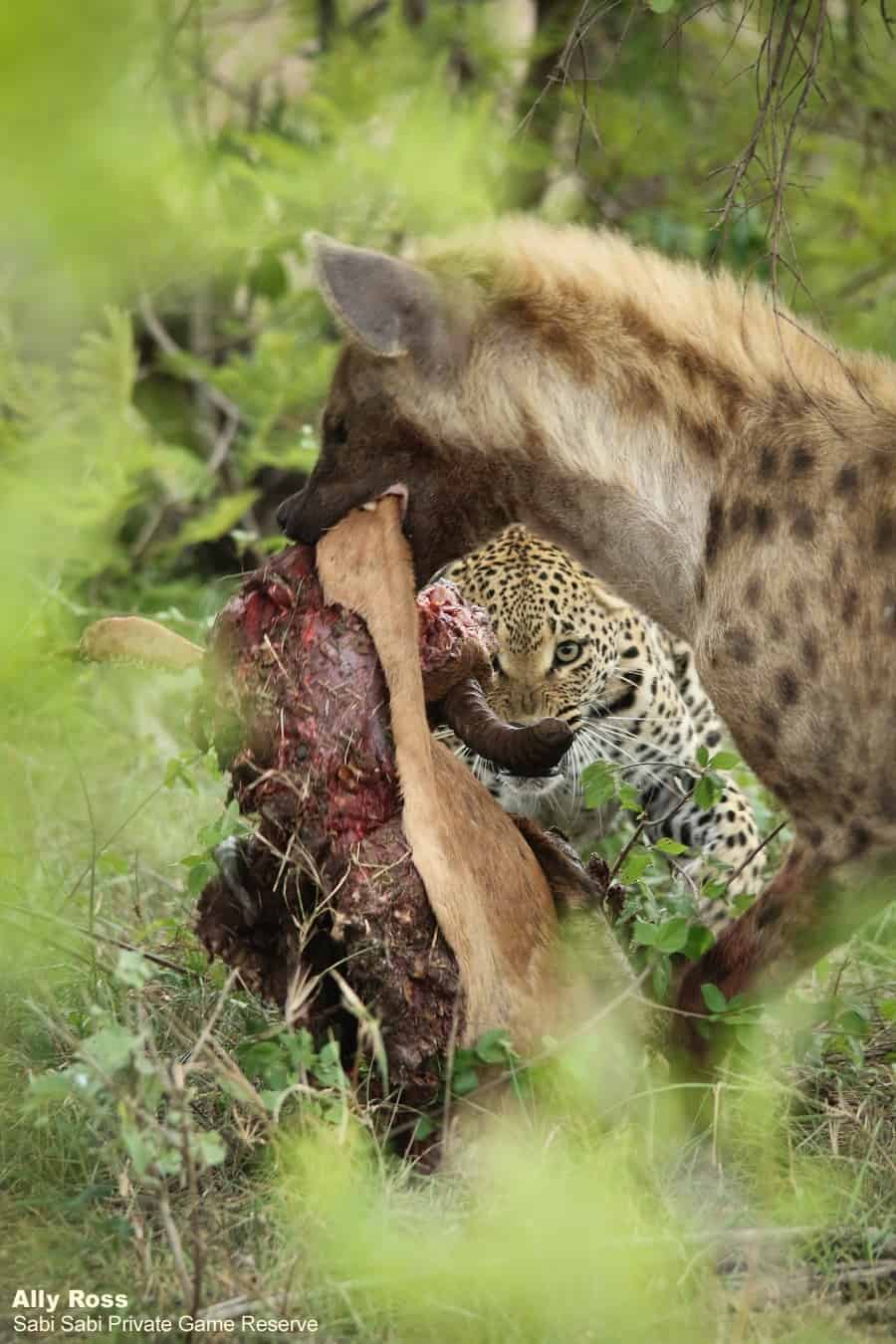 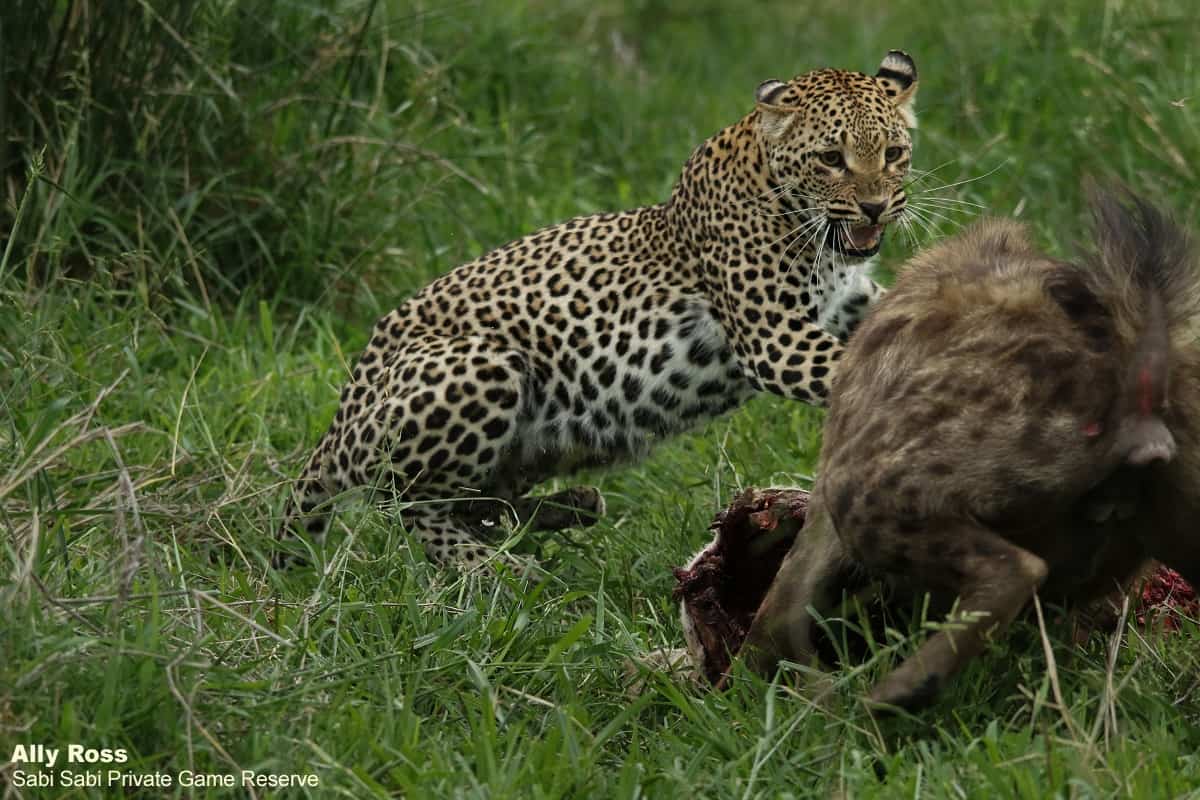 At odds of one to one, hyenas are able to displace most predators – except a lion – from a kill, but today the tables had turned and the leopardess, relentless in her attack, was putting his strength to the test.

Finally, he resorted to the water. We often see hyenas burying carcasses below the surface of the water and returning to their stored gem at a later stage. This act ensure that their kill is safe from the competition. 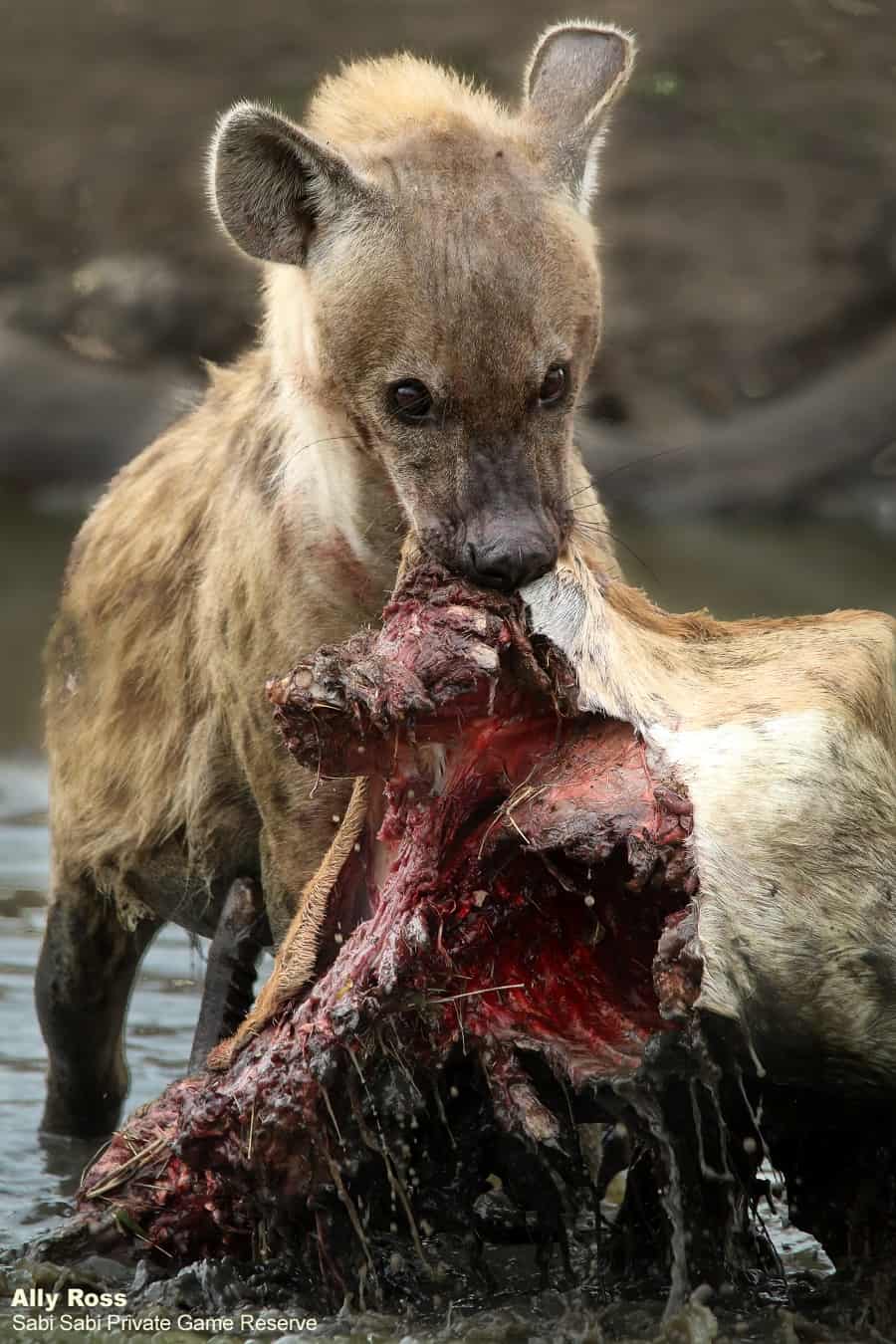 She hunkered down, her golden eyes, filled with determination. Whilst the hyena pulled large chunks of meat from the carcass she watched whilst concealed behind a boulder. 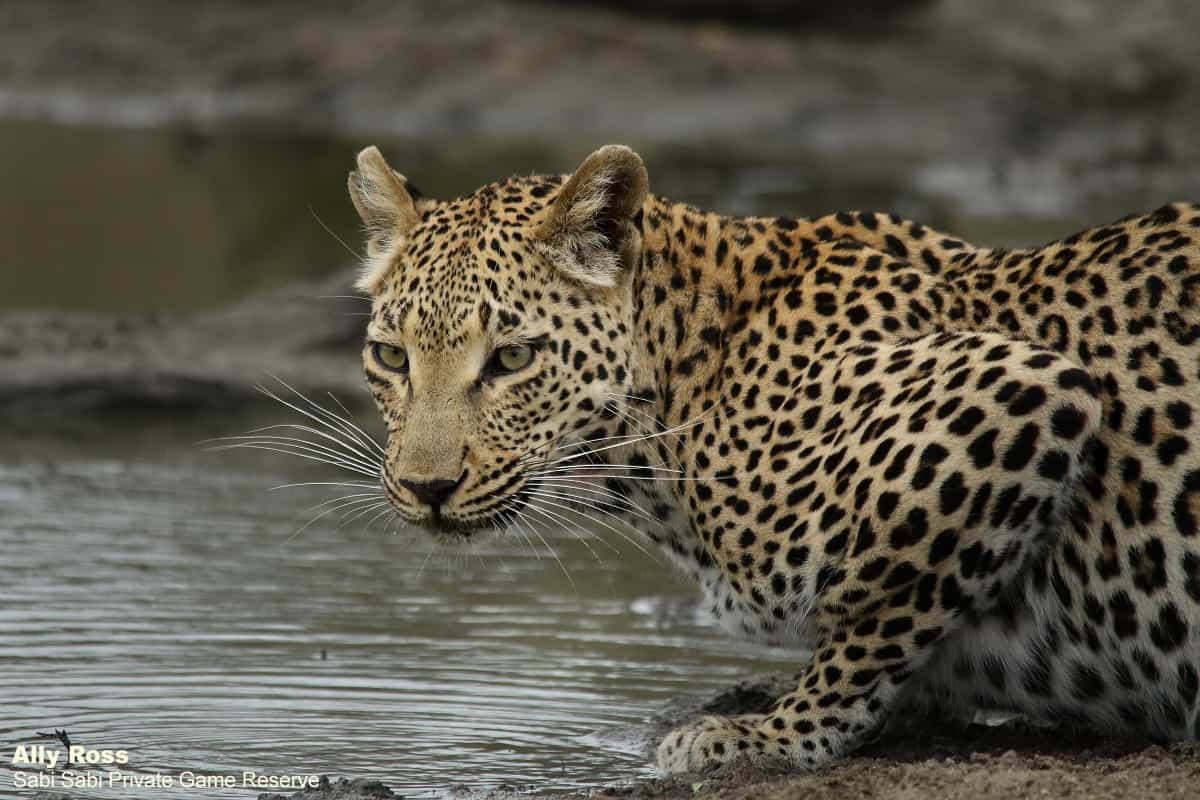 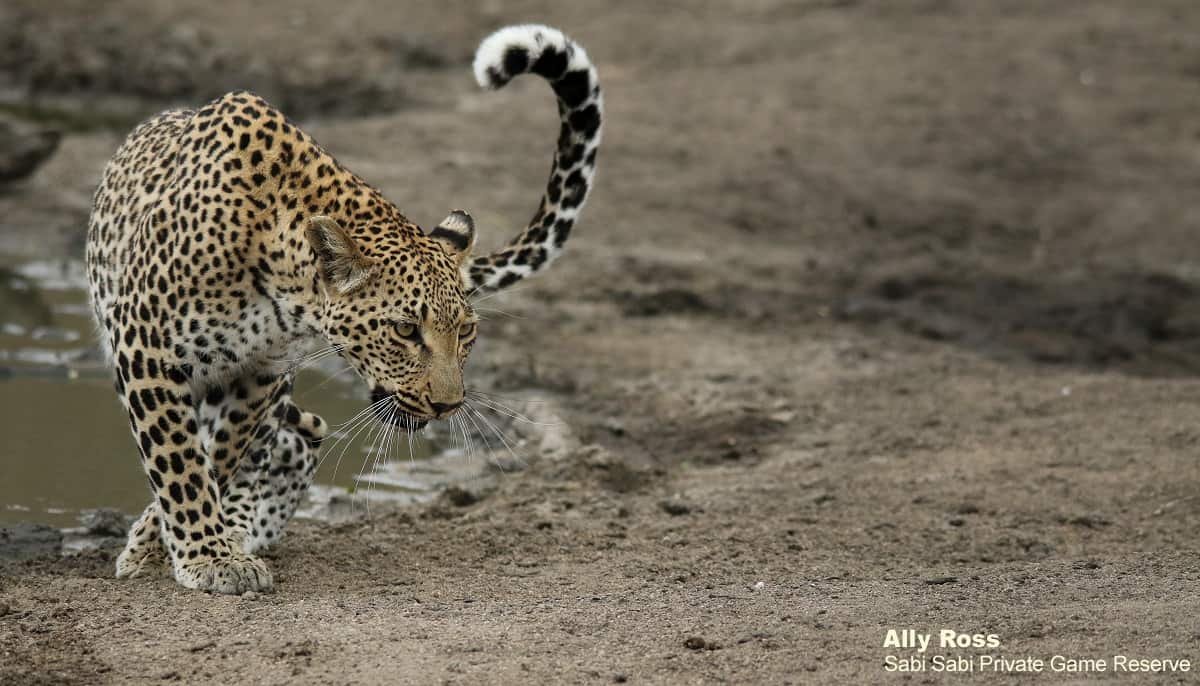 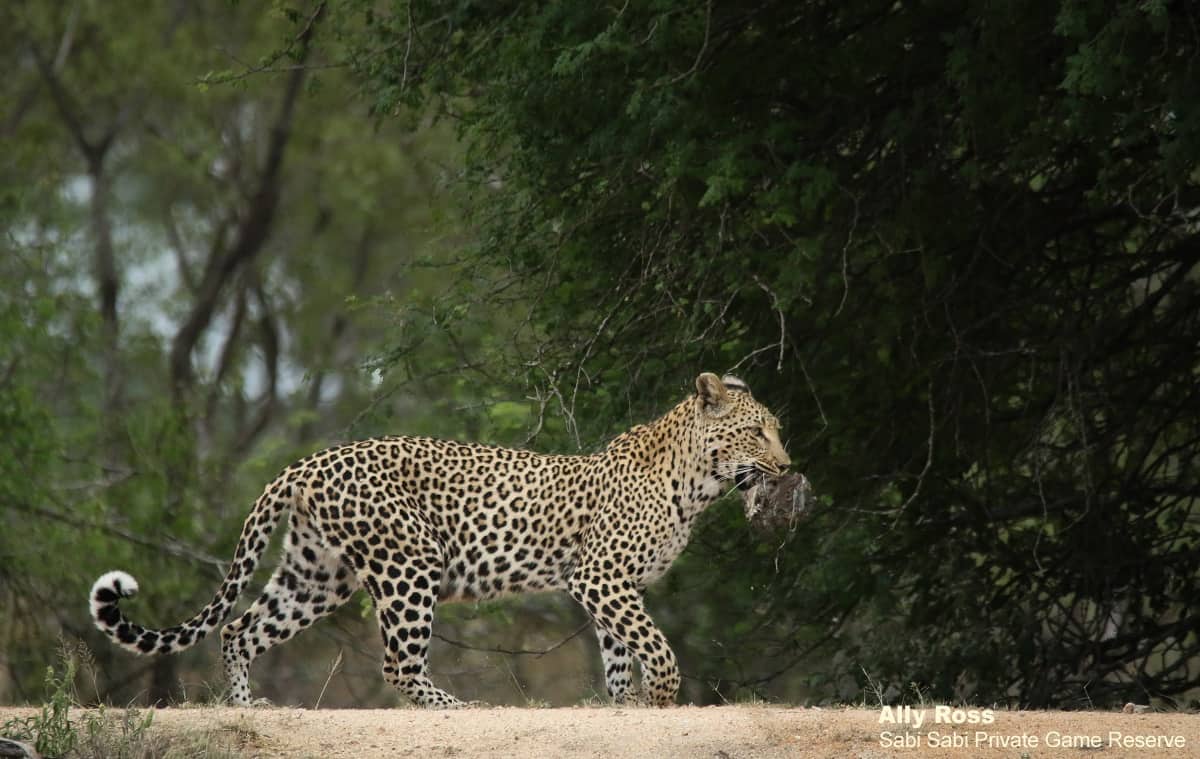 As the hyena became aware of her lingering presence, he made a hasty escape for the embankment to keep both himself and the carcass out of her grip.

She approached the water’s edge, neck outstretched as she sniffed. She tentatively paws at a small chunk of impala left behind by the hyena.  Making her way across the dam wall she walks after this small accomplishment; she seems to stride with a sense of pride… 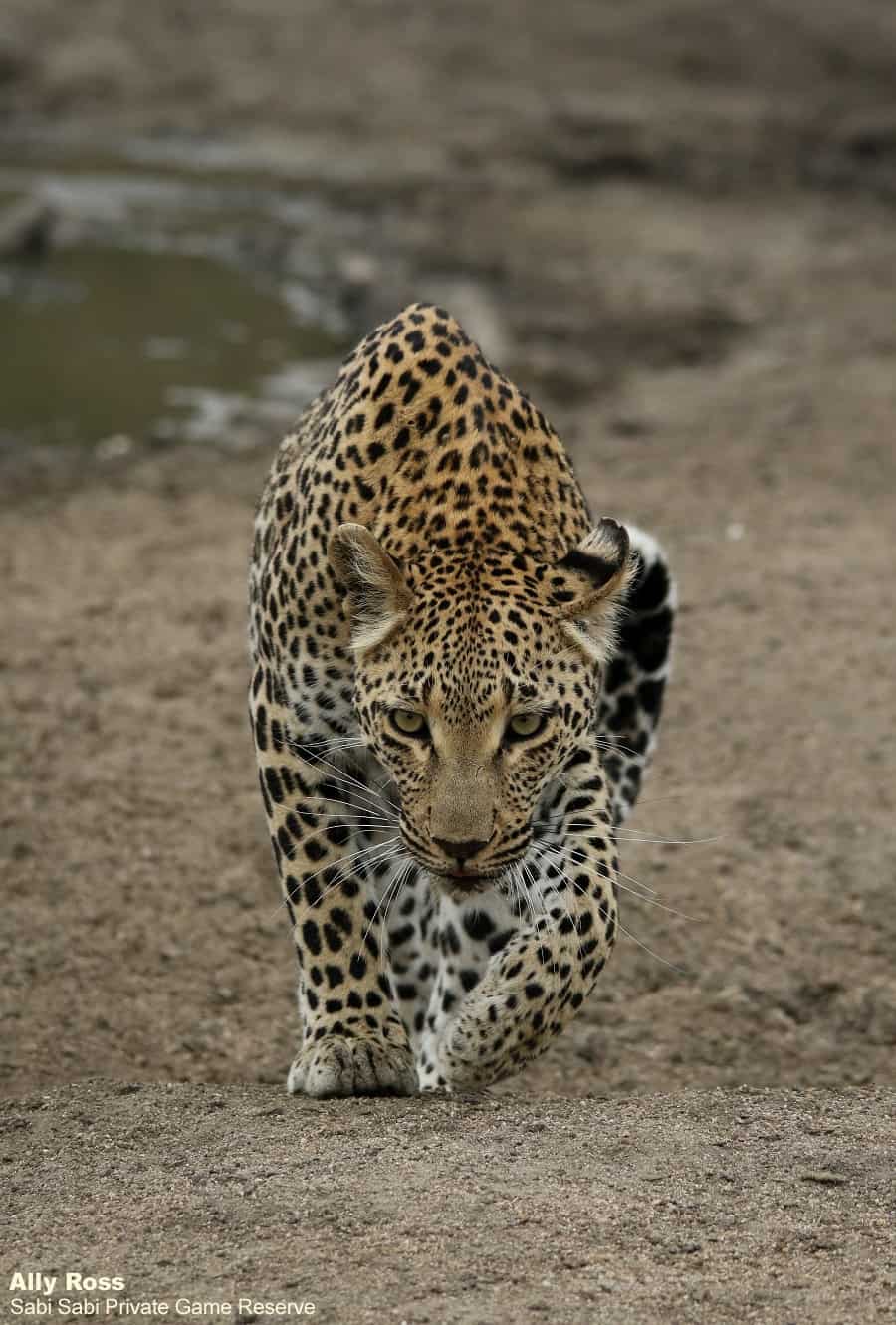 Swiftly making her way up the Boer-bean tree in which she once rested, she makes short work of the meat she stole and returns to the hyena to finish off the battle. She wastes no time running in for the carcass. Neither of them wanting to give up, we found ourselves witnessing one of the most incredible tug-of-wars we have ever seen.

The hyena’s powerful jaw clamped down around the open cavity of the impala as she tugged at the neck. She put all her strength into her hind legs to try and secure this impala, but the power of her opponent was made clear as both leopard and carcass were pulled through the culvert.

Overcome with defeat, she slinked toward a thicket to groom, as the victor retreats to the safety of the water, tentatively winning in fear of her return.

Every animal has an edge. A tactic in which they have come to master in their time of either being harassed by other predators or harassing predators to receive the upper hand. Unashamedly I generally cheer for the leopard, on this morning I was torn between leopard and hyena. I was intrigued by the hyena’s resilience and of course tactic. I found it interesting how he continued to take nail gauging blows from her sharp claws by dropping the crown of his head. We noted that this resulted in her giving her paw a good shake after a hard impact, allowed the hyena to gain a few greedy mouthfuls. Learnt tactic won this game for him. Easy meal, but a hard battle.

Nature generally amazes me each day, every sighting different from the other.