“I’ll have my dessert in a glass…”

A writeup or three back I introduced you the Donkiesbaai Steen (Chenin). The delectable Donkiesbaai Hooijwijn Dessert wine hails from the same stable. Before we delve a bit deeper into this after dinner delight let’s briefly recap on the Donkiesbaai Wine Estate.

Donkiesbaai has, for many years, been the favoured holiday destination of the Engelbrecht family, owners of the Rust en Vrede Wine Estate near Stellenbosch. Situated on the West Coast of South Africa, Donkiesbaai’s location is fondly associated with some amazing seafood cuisine such as crayfish and mullets grilled and prepared on an open fire accompanied by a chilled glass of Donkiesbaai Steen. Grapes are cultivated in the Piekenierskloof area not far from Donkiesbaai.

Hooijwijn, translated meaning “straw wine”, is made from the same grapes cultivated and used in the production of Donkiesbaai Steen. Harvested from unirrigated bush vines from the heart of the Piekenierskloof. Harvested at optimal ripeness, the grapes are placed on a dry rack and covered with straw. The bunches of grapes are turned twice weekly by hand to avoid them being burnt by the sun. This allows for equal and even drying of the grapes, which lasts for three weeks. During this process, the sugar within the grapes concentrates and once dry, the grapes are removed from the racks, ready for pressing.

During the next step, the grapes are destemmed and pressed in small shallow wooden crates. This is done to limit the amount of fruit loss during the pressing process. From here the fermentation and filtration process takes place. Finally, maturation which takes place over a period of six months in French oak barrels before being bottled. The end product LITERALLY being “dessert in a glass”!

On the nose, sweet sultana and citrus. On the palate, white stone fruit, peach and nectarine, sweetness of orange zest and the creamy after taste of crème brûlée.

The wine pairs beautifully with baked desserts such as chocolate fondant and crème brûlée. If, however, you prefer a cheese board after dinner, do not fear. The wine pairs beautifully with hard matured cheeses such as cheddar, provolone and pecorino as well as your softer milder cheeses such as camembert and brie. Either way, you can’t go wrong selecting Hooijwijn to end off an evening of five-star dining. 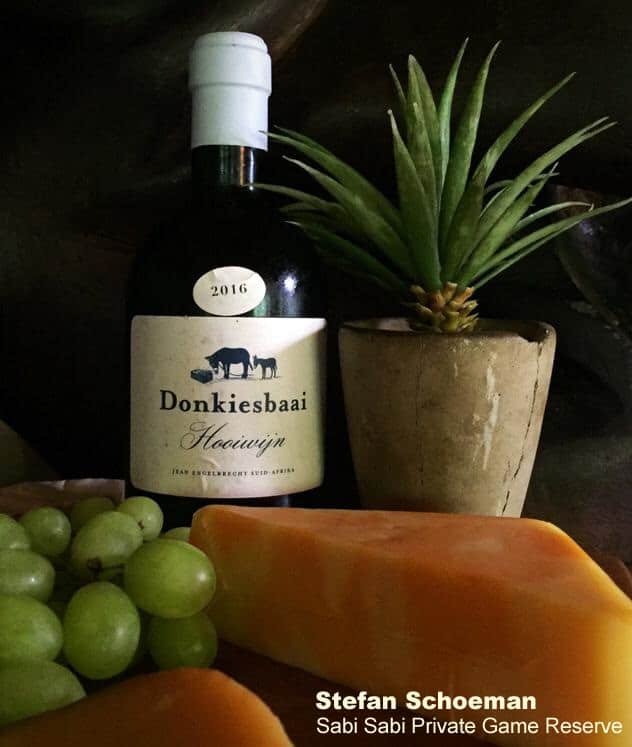