It was early one morning, and I was one of the first vehicles out on safari. The morning was peaceful as all the birds were calling and chirping during the dawn chorus. Most of the antelope were eating or warming up after a cold night and going about their daily activities. As the sun started to rise, it started getting lighter and now a bit easier to see the once camouflaged zebra or impala that blended into the darkness. 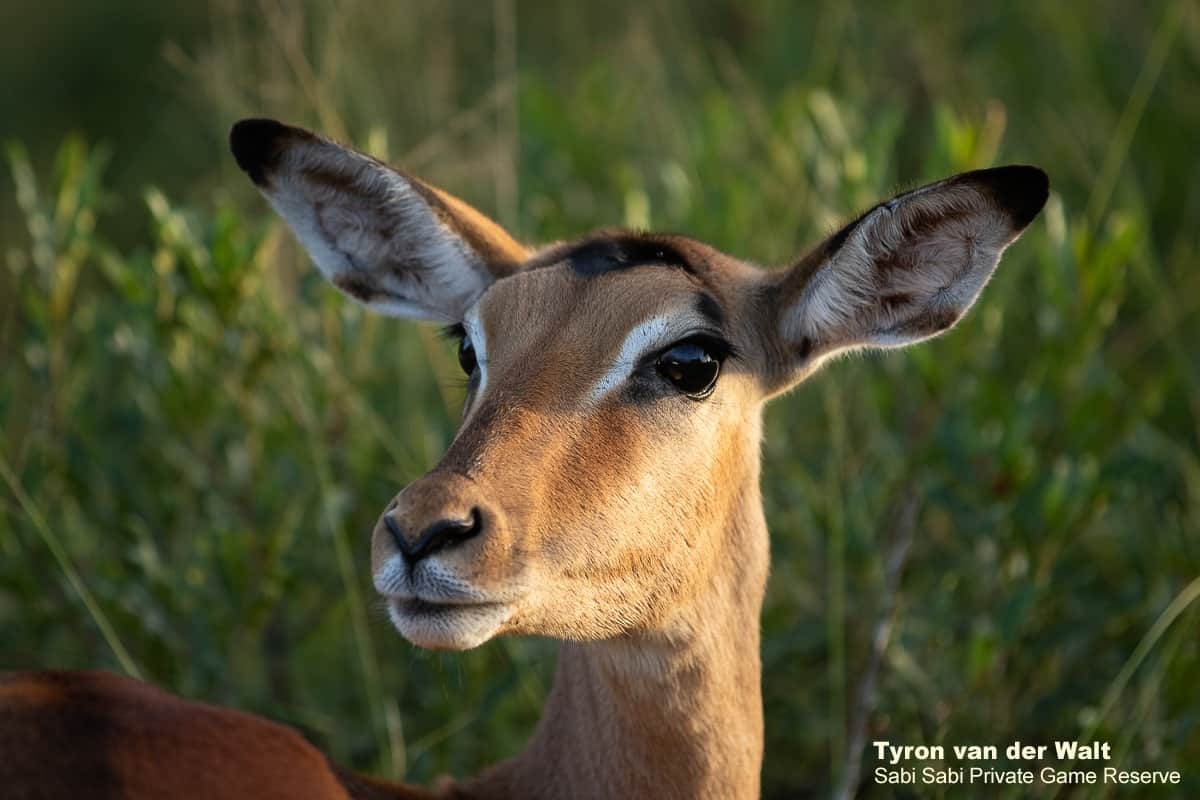 As I was driving in the Western sector of the reserve, seeing which animal I could spot or watching birds fly around, I looked down the road ahead of the vehicle and saw tracks of an animal that I could not quite tell which animal it was but upon getting closer and stepping out of the vehicle, it was the tracks of a female leopard. The tracks were prestige and sharp. “This leopard has just walked down this road within the past 30 minutes”, I said to myself. I decided to walk on foot, following the tracks as they moved from one side of the road to the other. (It is better sometimes to follow tracks on foot because there is less disturbance and less possibility of riding over any signs or evidence the animal has left behind). As I was following the tracks, I constantly looked around to see if the leopard may be nearby or in this case, if there were other animals around or moving towards me. I put my head down and continued following the tracks, but as I was doing so, something in my head said, “Look up”. I was so focused on the tracks and signs that I didn’t notice the female leopard resting in the Marula tree in front of me about 50 yards away. As I saw her, she had in turn, seen me. At this point we stared at each other for a couple of seconds but then I backed off slowly in the direction of my safari vehicle. I reached the Land Cruiser and turned it around and drove to the Marula tree I had seen her in. The leopard, still resting, but now just scanning the area to see what else was around her. 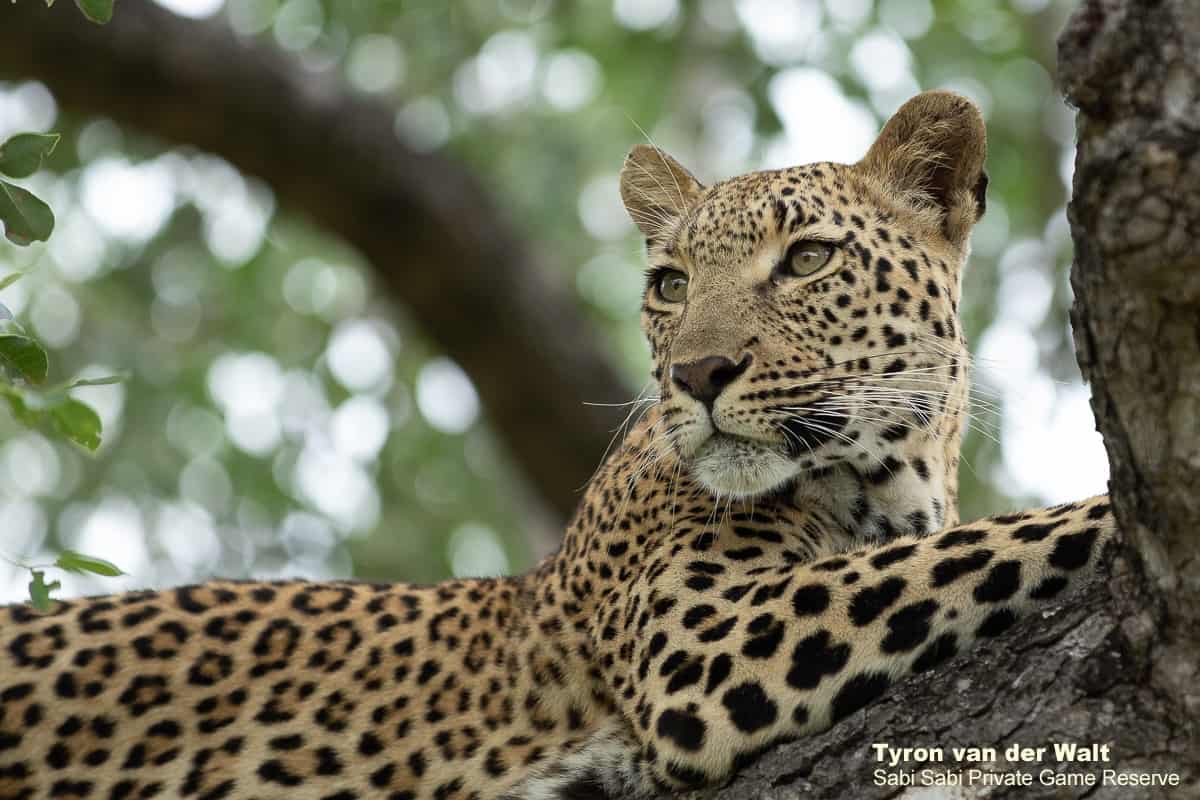 It wasn’t too long after watching her and taking a couple of pictures that she started showing signs of wanting to get on the move. As she started to move, she stood up, stretched, and began to descend majestically and with such ease down the tree trunk.

She was now walking at a steady pace through the long grass (grass that would probably reach the hip to mid-section of the average adult), weaving and stopping to listen every now and then. This made following her through the scrub very difficult. She then popped out of the long grass into shorter, more open plains where it was now a bit easier to follow her. She then ran up quite a large termite mound and sat upright just scanning the area, almost posing for a great picture. After scanning she scurried down the other side of the mound toward another large Marula tree, now in the open plains where she reached the base of the tree, looked straight up and jumped! Using her sharp claws and great sense of balance, climbed up the tree and used it as another lookout post before eventually lying on a branch once again and resting. 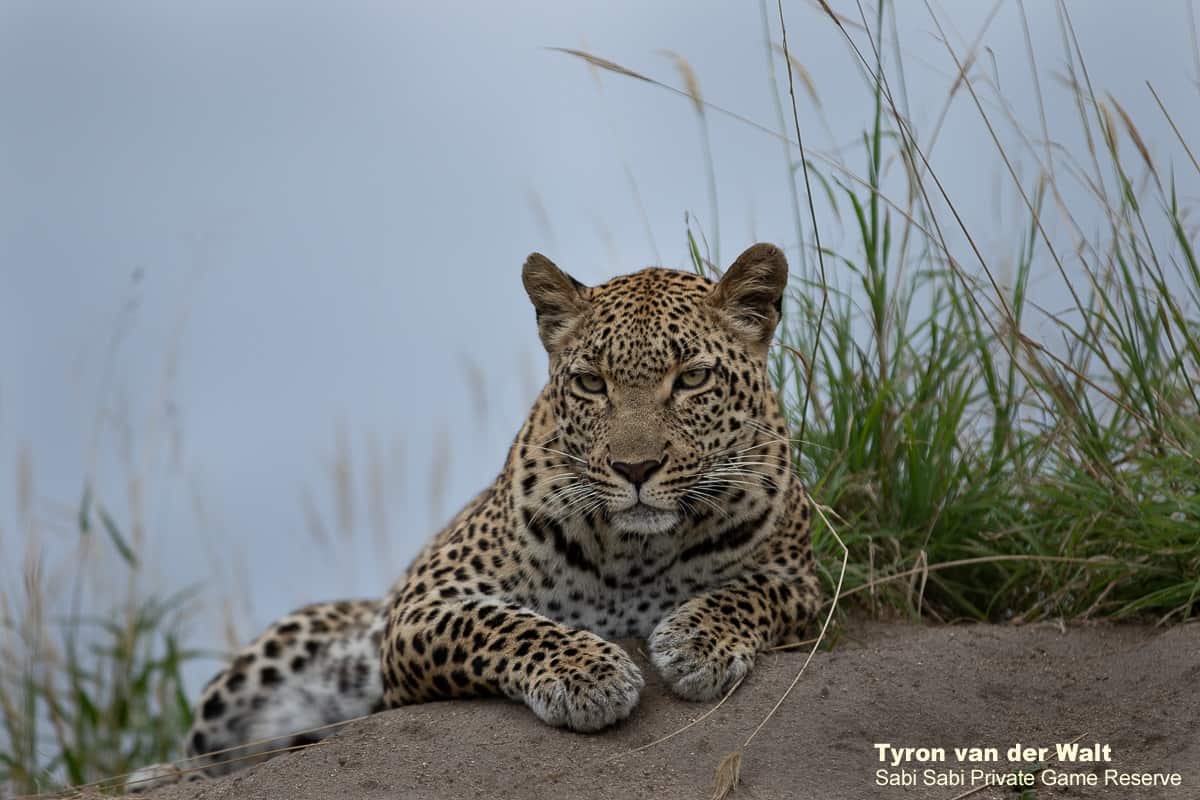 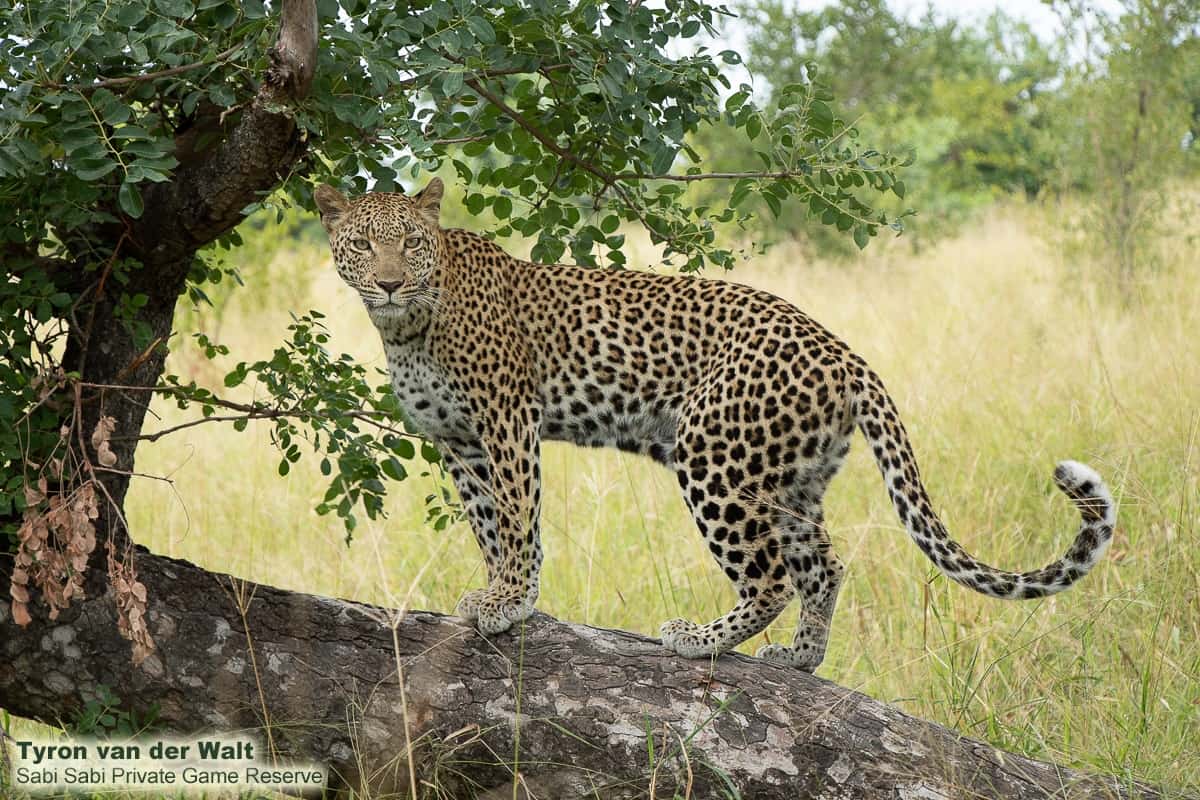 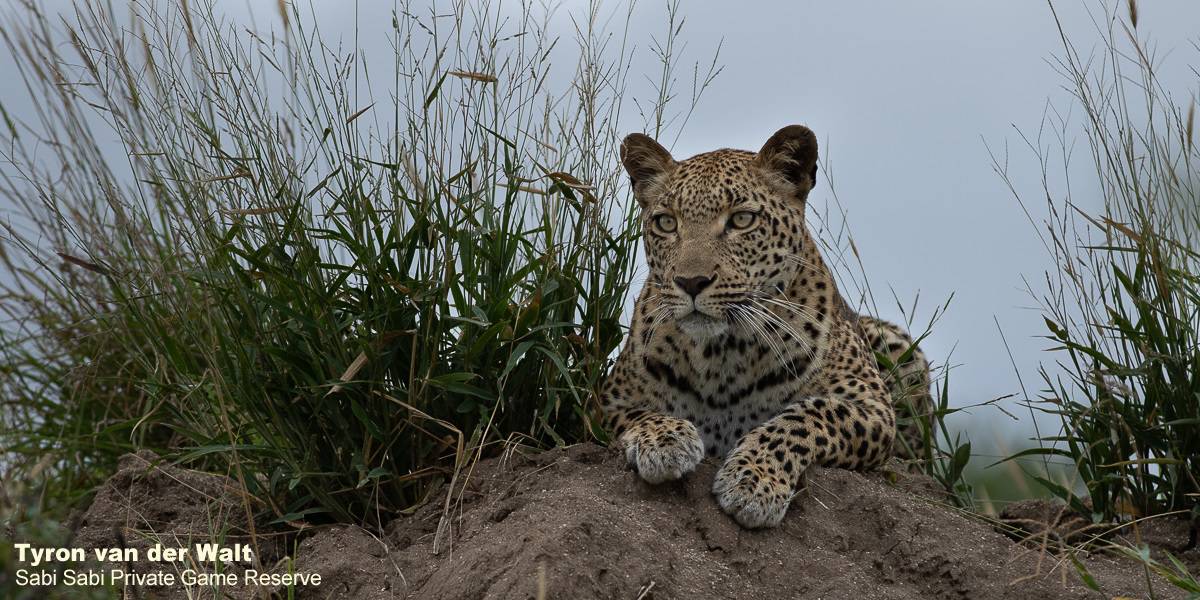 She had now been up in the tree for quite some time, but something got her attention. “Was it an unsuspecting impala? Was it something small in the grass rustling around?” I thought as I looked around and behind the vehicle. As I did this, I noticed quite a few bushes moving and the sound of many hooves and heavy breathing coming straight toward me and the tree in which the female leopard was resting in. The sounds got closer and louder, it was a massive herd of buffalo, all on a mission towards a waterhole nearby. The interesting thing was that, as the buffalo came closer and walked directly below the leopard, neither flinched! The buffalo did not see or even smell the leopard that they had now encircled, nor did the leopard even get up from the lying down position. But as quickly as the huge herd of buffalo came, they were gone and now both carried on with their lives. 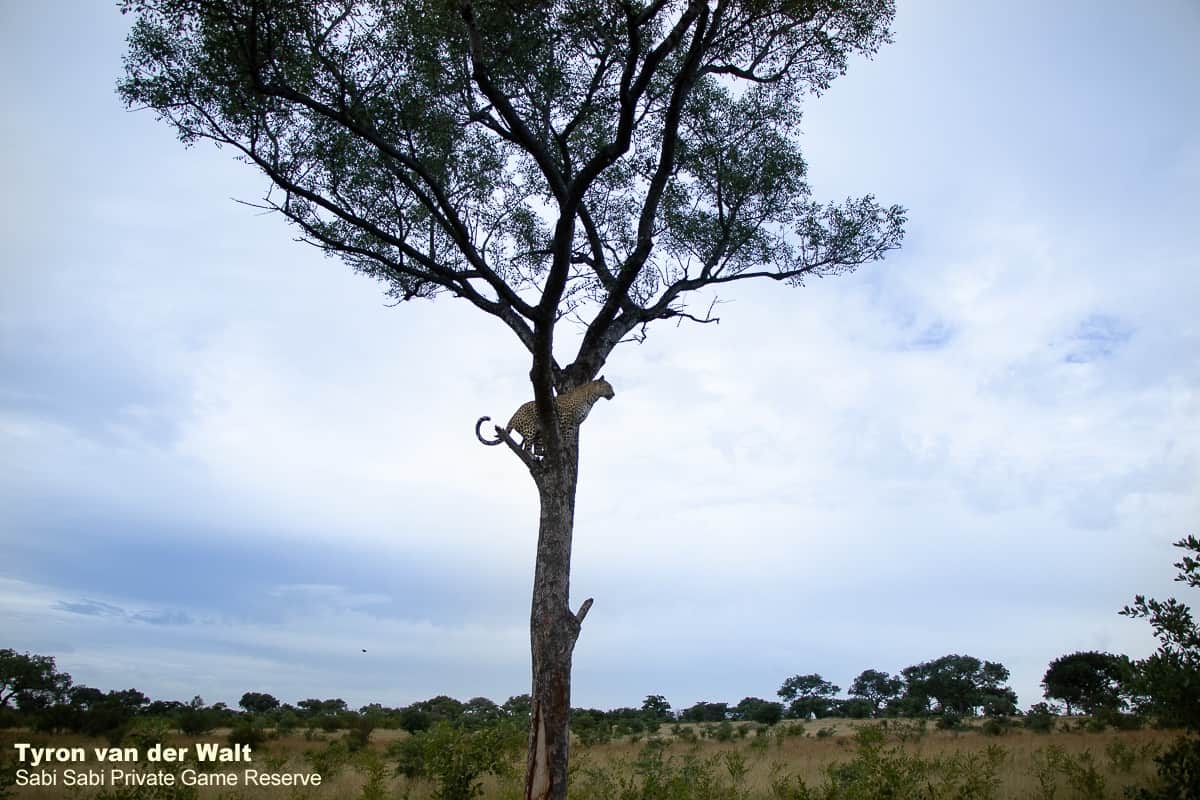 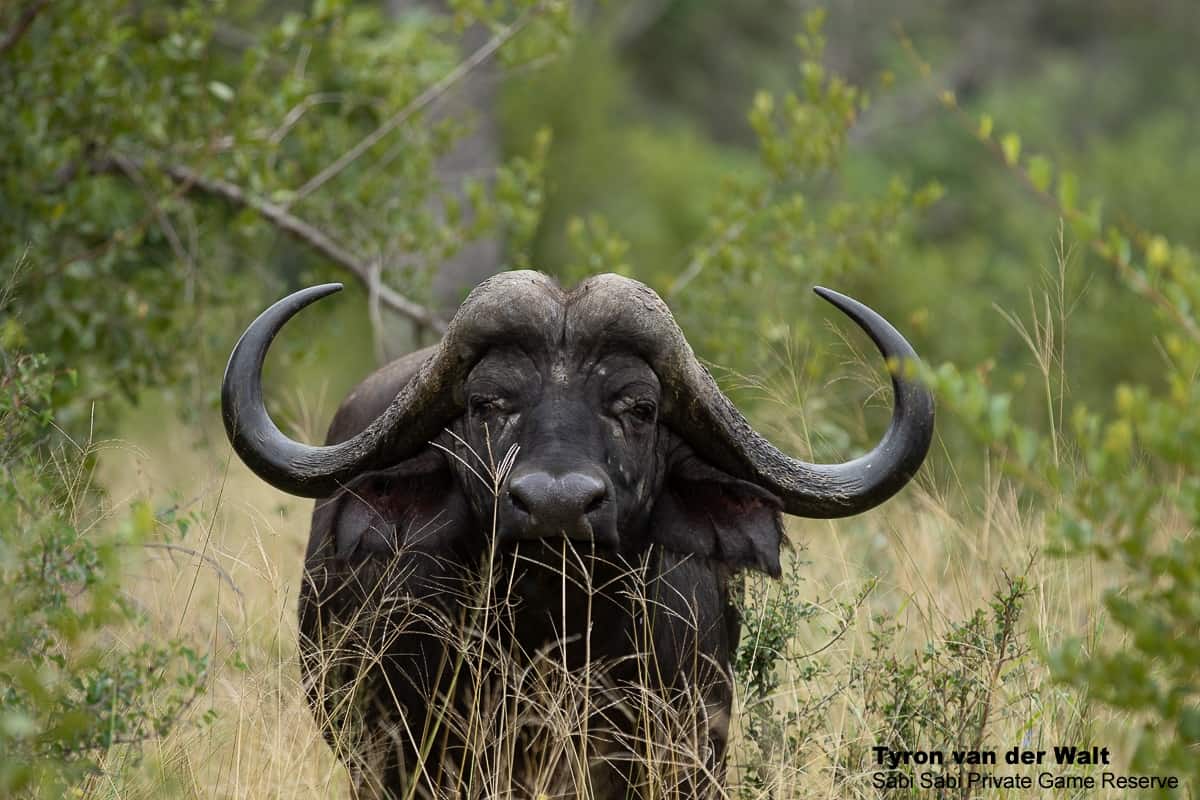 As the morning went on, I decided that I was going to let the female leopard rest and slowly make my way back to camp. I started the vehicle and had my last good look at her and let her be. This whole process of searching, tracking, finding and following the leopardess was unbelievable and indescribable. I was really loving every moment that I hadn’t even noticed that I was with her for just shy of 5 hours! 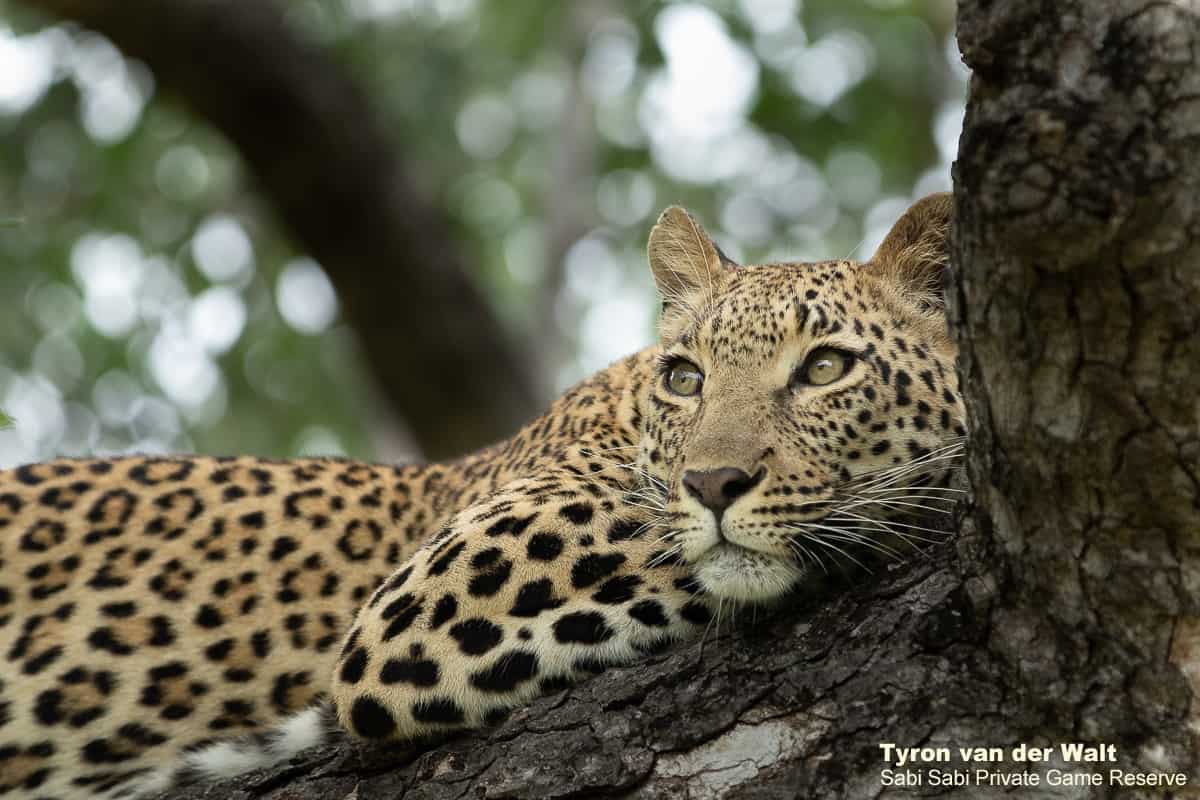 It just shows that time really does fly when you’re having fun and enjoying something special! 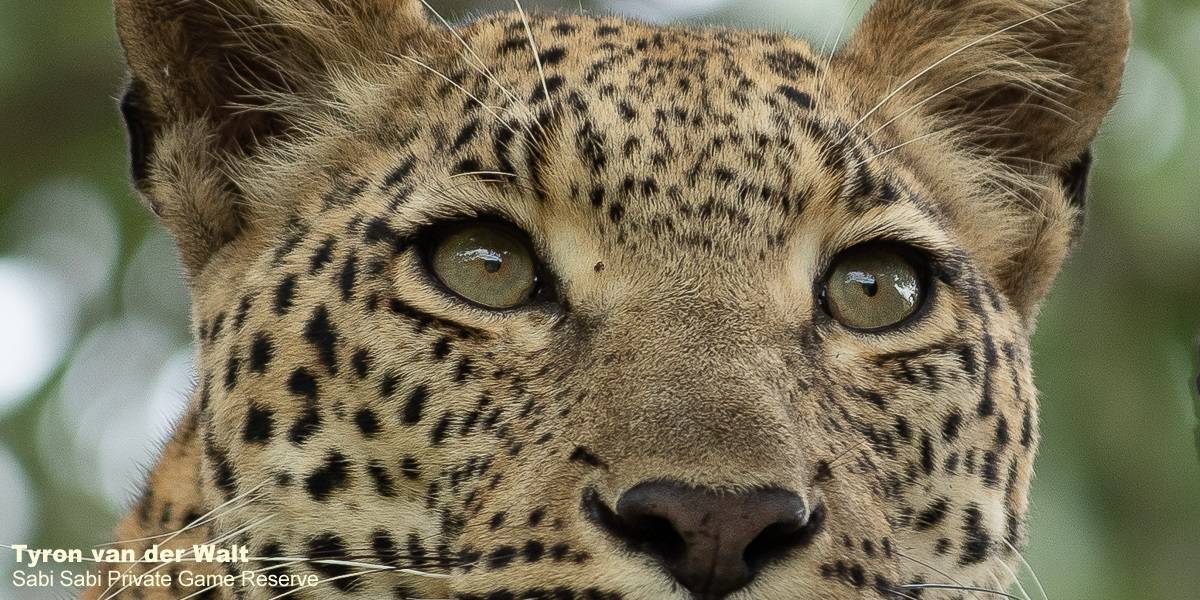